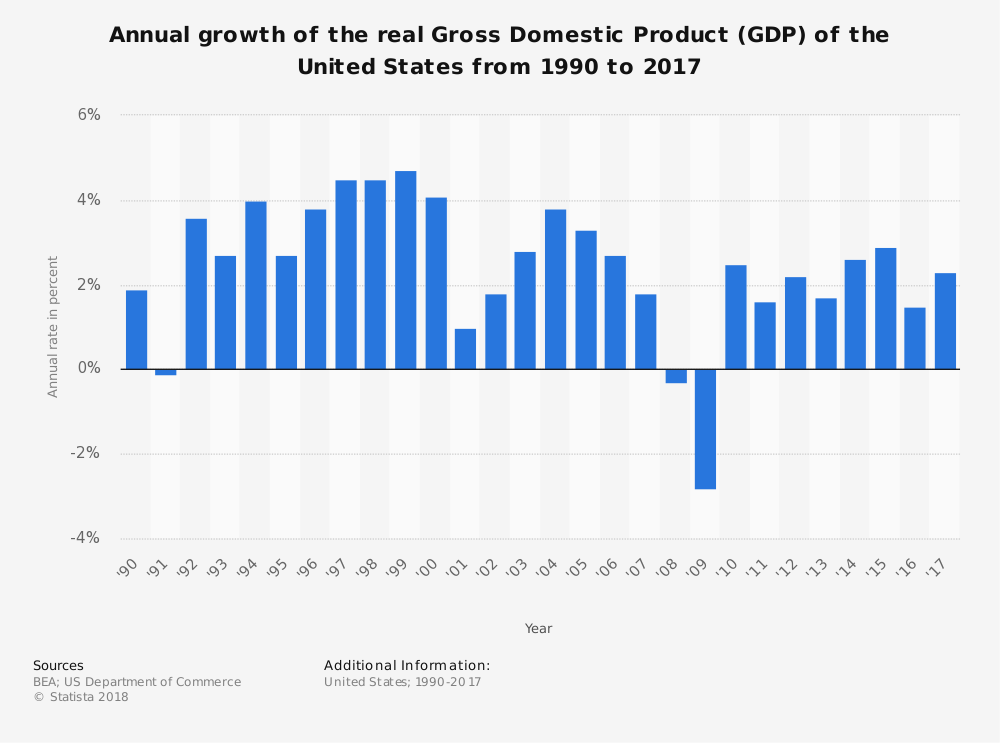 Why should you be concerned about our nation’s GDP? Isn’t that something for economists and politicians to worry about? I’ll give you the short answer first, and then later I’ll explain in more detail.

Do you care about your overall family income? This can be a combination of one or more salaries plus money earned from a business, rentals, or investments. If it drops, do you worry? If it increases, do you rejoice? If you care about how much money makes its way into your bank account, you should care about GDP. GDP is the growth in the value of all the products and services produced by our nation, and it directly affects your pocketbook. A strong GDP means more jobs, better personal income, and higher savings for retirement and college for your kids.

The 4.1% GDP number announced by the White House this week is a big deal and a big accomplishment. That’s why the president is rejoicing, and why all the Liberals are sad. All Americans should be happy when GDP is up, but if you have sworn an oath to resist, repudiate, and reproach anything the president does, you are required to denigrate even great news connected with President Trump. (The scientific name for this unhealthy approach to life is Trump Derangement Syndrome, usually abbreviated by the mental health community as TDS.)

So, what is GDP? It is the Gross Domestic Product of America. We used to hear the term GNP (Gross National Product) more often. The difference is that GNP measures the value of the production (goods and services, as well as passive income from investments) of all the citizens FROM our nation – whether that production occurs in the U.S. or in other countries. GDP measures that same production - but limits it to activities WITHIN our borders.

Both attempt to measure the health of the economy, from differing points of view. For instance, the GNP of the United States is $250 Billion greater than its GDP, because a massive amount of production takes place by American-owned companies operating in foreign nations. This is primarily to take advantage of cheaper labor in other nations. Conversely, China’s GDP is about $300 Billion greater than its GNP, since large numbers of foreign companies have manufacturing operations in China due to its cheap labor. Overall, most experts believe that GDP is the best way to measure a nation’s economy.

Technically, the way GDP is calculated is by first adding the personal spending of all residents (not just citizens) to business investments and government expenditures (local, state, and federal). Then you add to that the nation’s exports minus its imports. As you can see, it is a simple calculation. Economists just make it sound complicated so they will be invited on talk shows to explain it.

So why is our most recent GDP of 4.1% important? It’s all a matter of context. First, it is a quarterly number, not an annual one. Quarters show trends, but what we’re really looking for is the annual number. Before Obama was elected, annual growth in GDP was typically 3%. Not once in Obama’s 8 years did the economy grow at 3%. He’s the only president in history who failed to meet that benchmark. In fact, in 3 of his 8 years, growth was less than 2%. (See the chart above.) And his worst quarterly growth rate was a horrendous 0.4%.

So why, in just 18 months, has the Trump economy so strongly surpassed the Obama economy? It’s simple. Obama’s economic views were Socialist, while Trump’s philosophy embraces Free Enterprise. Obama talked the economy down, saying that we would never see strong growth again. “Those days are gone,” he said. Trump has been the economy’s Cheerleader-in-Chief, inspiring confidence in citizens and businesses alike. Most importantly, Obama said that vital jobs in areas like manufacturing, energy, and construction were “gone forever.” Trump said he would bring them back, and Obama publicly mocked him. But guess what? Those jobs are coming back and shuttered factories are re-opening.

By the way, I wrote an article in November 2011, titled, “1,000 Days of Economic Destruction.” It’s worth looking at to give you some context on today’s discussion. Part of the article discussed Obama’s ridiculous statement that he had “created or saved” millions of jobs. I quoted Ann Coulter saying that “Obama created or saved the Grand Canyon." In other words, how could anyone possibly prove that he had “saved” jobs? The only reason he felt the need to create a new measurement that no president had ever used, is that he didn’t create jobs even after spending Billions on his “stimulus” packages.

I have often said that presidents cannot create jobs. Only businesses can do that. But they can cause jobs to be created by lowering burdensome, job-killing regulations; by creating a business-friendly, optimistic environment; and mainly by lowering taxes. Trump has done all of the above, and – voila! – businesses are creating new jobs in huge numbers.

People who have been out of work for years as a result of eight years of Socialism are employed again. New businesses are starting in record numbers, and old businesses are reopening. Both employees and businesses have more income, and they are spending money. People are buying houses, and businesses are expanding their physical plants because they are finally able to plan for the future.

All of these contribute to a strong GDP. And as long as Trump continues to keep his promises to the American people, we will continue to have strong GDP growth. 5%, here we come!