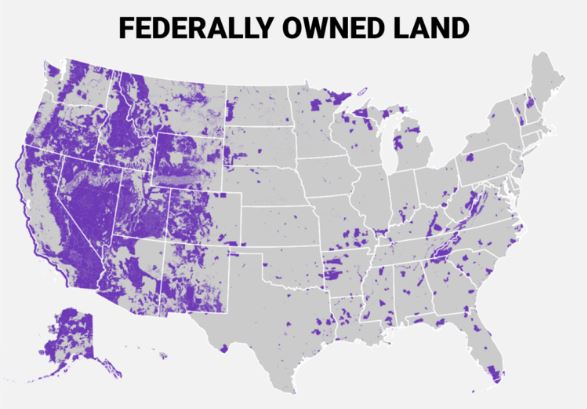 Have you ever wondered why there is so much land held by the US government? The federal government “owns” 27% of the land in the US (640 Million acres). But 93% of all that land is located in 11 Western states. For instance, the feds have claimed 91.1% of all the land formerly owned by the State of Nevada. The average amount of land seized from these 11 states is 45.2% of all state-owned lands.

The amount of land taken from each of the 11 Western states is:

Besides one group being from the West, and the other from the East, what sets these groups of states apart?

Have you given up on trying to figure out the difference between the two groups? Think of time rather than location. The second list is the 13 states that originally banded together to form the United States. The first group is 11 Western states that were among the last to join the Union. If we add Alaska, which had to give up 61.2% of its land, and Hawaii, which lost 20.0%, you have 13 states that had 44.3% of their land, on average, taken from them.

Why did the federal government extort ten times as much state land from the Western states than from the Eastern ones? The answer is: Because it could.

You see, when the Union was formed, the states had the power. The federal government was weak, as the Founders intended it to be. That way they had to listen to the states. In that case, it was the states negotiating with one another to determine the conditions under which they would unite.

But after the union was formed, the federal government did some hard negotiating with the next states that wanted to join the club. It demanded, among other things, a moderate percentage of their land as “dues.” It took more of their land than the original 13 had voluntarily given up, but much less than the final 13.

By the time the last 13 states joined the rest, the federal government had become so strong that it could extort huge amounts of land that had belonged to these territories for many decades. But that doesn’t matter when you have a big stick. In the case of Nevada Washington said, “Give us 90% of your land – take it or leave it.” Have you ever considered why Nevada turned to gambling, prostitution, and organized crime? It wasn’t because it was largely desert. It was because they weren’t allowed to use most of their land to prosper as the other states did.

More Than Half the Land in the Western States is Federally Owned. Now Some States Want it Back!
https://www.washingtonpost.com/blogs/govbeat/wp/2013/10/15/almost-half-the-west-is-federally-owned-now-some-states-want-their-land-back/?utm_term=.78a083606ec5