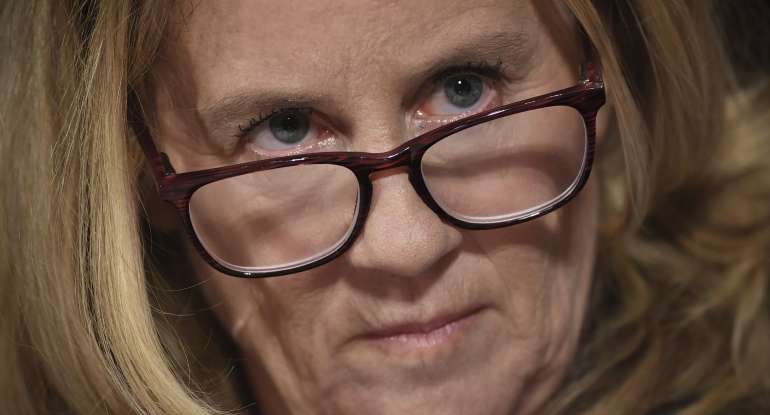 When Dr. Ford first testified before the Senate Judiciary Committee, I found her to be credible. She seemed sincere, and except for a very bad memory, she seemed to have her facts straight. Most commentators still say she was as credible as Judge Kavanaugh, making it a “she said, he said” tie. But if you examine the facts surrounding her testimony, her statement starts to fall apart.

She claimed that the incident with Kavanaugh left her with a life-long fear of flying. (I’ve never heard of a sexual assault having that effect, but I guess there’s a first time for everything.) So she couldn’t come to Washington on Monday and couldn’t testify until Thursday because she had to drive from California. Yet she flew to Washington, DC. And she admitted in her sworn testimony that she has recently flown to Maryland, Hawaii, and Tahiti (an 8-hour flight). This lie was nothing more than an attempt to delay the proceedings.

She claimed that three friends could corroborate the events as she described them. Yet all three of the witnesses she names have sworn under oath (with a penalty of perjury) that the events she described never happened and that they had never attended such a party. One woman, Dr. Ford’s closest friend to this day, stated under oath that she had never met Brett Kavanaugh.

She claims that she tried to scream and that Kavanaugh put his hand over her mouth to keep others from hearing her. Yet in other sworn testimony she claimed that Kavanaugh and his friend locked the door in the upstairs bedroom and turned up the music so that no one on the lower floor could hear what was going on.

She claimed under oath that she didn’t know she could have testified in California. Yet the Committee sent two letters and an email making that offer. So either she is lying, or her Democrat activist lawyer (a member of the Resist movement recommended by Democrat Diane Feinstein) failed to report these offers to her. If that is the case, it is a violation of the attorney’s code of professional conduct.

She opened her testimony with, “I am here today not because I want to be. I am terrified.” She also claimed that she sent her now-famous letter to Democrat Ranking Member Diane Feinstein, and she wanted her identity to be kept confidential. But strangely, a month before the letter was leaked by her, her Democrat Congresswoman, or Feinstein (the only ones who had it, per her testimony), she hired a lawyer and took a lie-detector test. These are not the actions of someone who does not expect to testify.

Her polygraph test was highly irregular. She hired the polygraph operator, but can’t remember who paid him. If she can’t remember who paid for an expensive test a month ago, how can anyone trust her memory of events from 36 years ago? After describing much the same information as she sent to Feinstein, she was asked only two questions: “Is any part of your statement false? Did you make up any part of your statement?”

First, it is most unusual to conduct such a test with only two questions. Second, both questions are essentially the same. Finally, according to the operator, her attornies wrote the questions. His opinion was that she “believed” what she said was true. This is a far cry from a full, independent polygraph examination. And even those are not admissible in court because a well-trained person (such as Dr. Ford, a Doctor of Psychology) can beat the test.

When I was in law enforcement, I took several polygraphs. Each took several hours. The operator asked a number of questions that were obviously true (“Is your name Thomas Barrett?), followed by several that were obviously untrue (“Are we in Russia?”) These established a baseline of true and false responses that he could compare to later answers. Then he asked numerous questions, sometimes asking the same question in several different ways. A test such as Ford engineered doesn’t come close to the standard of the professional polygraphs I have taken and observed.

The main problem with Dr. Ford’s statement (composed with the coaching of an attorney) is that it was deliberately designed so that no one could check any of the details. “I was attacked by Brett Kavanaugh. I don’t know when, where, or any other details – but I remember distinctly that it was Brett.” How does one defend against that? If you know the home, you can ask the parents if any such party ever took place there. If you know the date, it’s easy to determine where Kavanaugh was on that day.

Let’s talk briefly about her marriage therapist’s notes, which she offers as evidence. She does discuss that incident, but she never mentions Kavanaugh’s name. She only attaches his name to her narrative after he is in the national news. She also told the therapist that there were four boys in the room. Now she conveniently states that she “misspoke” because it doesn’t fit with her new narrative – that Brett Kavanaugh and his friend Mark Judge were the only ones in the room.

I also want to encourage you to watch her opening statement. She continuously moves back and forth between fake crying and smiling. She uses the fake crying and a weird baby girl voice when she thinks it will gain her sympathy. But if you zoom in (as I did) during the fake crying, you will see no tears whatsoever.

Finally, let’s talk about her best friend – both then and today – a woman named Leland Keyser. Keyser sent the Senate Judiciary Committee a sworn statement that she did not remember the party in question, and that she does not remember ever meeting Kavanaugh. A letter of “clarification” from her lawyers states, “As my client has already made clear, she does not know Judge Kavanaugh and has no recollection of ever being at a party or gathering where he was present, with, or without, Dr. Ford.”

The attorney continued that Keyser “does not refute Dr. Ford’s account, and she has already told the press that she believes Dr. Ford’s account.” In other words, someone got to her and coerced her to amend her sworn statement by saying that she “believes” Dr. Ford. Which, of course, is meaningless since she makes clear that she was not present, and therefore has no basis on which to either believe or refute Ford’s account.

But the most damning part of Ford’s testimony is something that nobody seems to have noticed. Ford claims that Keyser was downstairs when she was supposedly being attacked by Kavanaugh. She somehow got free and hid in a bathroom. Then she ran down the stairs and out the front door. She has no idea how she got home.

Here’s a question. Why did Ford leave her best friend at the party to be raped by two supposedly lust-filled teen-age boys? Why didn’t she at least warn her? And why does her friend remember nothing of this dramatic event?

Joe diGenova Breaks down the Kavanaugh-Ford Hearings – A “Must View”
https://www.youtube.com/watch?v=_pIrCSrNRrM

How to Cheat a Polygraph Test
https://www.wikihow.com/Cheat-a-Polygraph-Test-(Lie-Detector)

Ford Throws Friend Leland Keyser Under the Bus;  Blames “Health Challenges for her Not Remembering the Party
https://www.thegatewaypundit.com/2018/09/christine-blasey-ford-throws-friend-leland-ingram-keyser-under-the-bus-blames-health-challenges-for-her-not-remembering-kavanaugh-party/