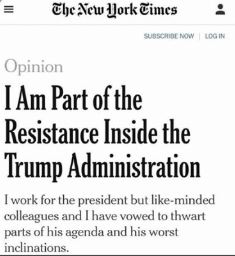 First, let’s debunk the whole “Senior Official” thing. Any Administration staffer who needs to be confirmed by the Senate is technically a “Senior Official.” But 1,201 Administration staffers must be so confirmed. Reliable sources in the White House believe the traitor is probably a low-level staffer in one of the government’s many peripheral agencies. If he was a high-level official in one of the key agencies he would be better informed than his “op-ed” indicates. Also, analysis of his writing style doesn’t match that of any real highly-placed official.

It’s possible this jerk doesn’t even work for Trump. As long as the NY Times allows him to be anonymous, we don’t know if he actually works for the Democrat Party – or for Vladimir Putin. Even the far left NY Times doesn’t allow anonymous editorials – because they are bogus. But they stopped being a news outlet years ago when they signed on as the PR arm of the DNC. Their excuse: The traitor might lose his job. Well, duh! Anyone in a position of trust who abuses it in this way deserves to not only be fired, but also drawn and quartered.

He claims, “The dilemma — which he does not fully grasp — is that many of the senior officials in his own administration are working diligently from within to frustrate parts of his agenda and his worst inclinations. I would know. I am one of them.”

This would be preposterous enough by itself. But when you add it to his other statements, it becomes truly ludicrous, even bizarre. He states, “We want the administration to succeed and think that many of its policies have already made America safer and more prosperous.” Also, “There are bright spots that the near-ceaseless negative coverage of the administration fails to capture: effective deregulation, historic tax reform, a more robust military and more.”

So he believes Trump should be removed, impeached, or whatever. But he says he wants “the Administration to succeed.” And that “the Administration” has put policies in place that “have already made America safer and more prosperous,” and has accomplished “effective deregulation, historic tax reform, a more robust military and more.”

Who does he think “the Administration” is? Sure, it is people that work for Trump. But they would be just another bunch of politicians and administrators without Trump’s leadership and vision. So Mr. Anonymous Traitor speaks out of both sides of his mouth: Trump’s Administration: GOOD. President Trump: BAD. You can’t have it both ways, you cowardly turncoat.