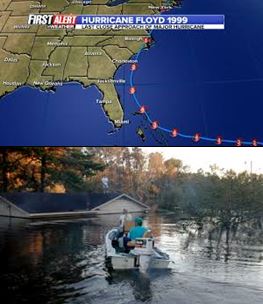 Nineteen years ago Hurricane Floyd made landfall in coastal North Carolina. Ironically it initially devastated the same area of the North Carolina coast that was hit by Hurricane Florence this week. The reason this is ironic is that many of the people who managed to survive Floyd in 1999 have defied Mandatory Evacuation orders for Florence. Are their memories really that short?

68 people died as a result of Floyd. Most of them were people who refused to evacuate. So far 14 people have died due to Florence.  We don't know how many more may lose their lives. But we do know that if people are killed by this hurricane, it will again be mostly people who refused to obey evacuation orders.

Those who read my weekly columns on www.ConservativeTruth.org know that I am not a fan of giving government more power. They already have far too much. But I do believe this is an area that requires more authority. Mandatory Evacuations should only be used for the most severe situations. But when they are issued, they should be enforceable.

Two news items caught my attention today. First were the stories about people who had refused to evacuate a Mandatory Evacuation zone, and subsequently called 911 to be rescued from flood waters. The second was an item about a motel whose roof had been damaged. Knowing that the rest of the roof would collapse during the storm, the police chief ordered the 71 people sheltering in the facility to be moved to a shelter - and he enforced his order.

Do I believe that the authorities should have the power to forcibly remove people whose lives are in danger in a disaster situation? I do. Not just for their safety, but also for the safety of the rescuers who will be called to evacuate them later. Too many firefighters, cops, and rescue squad members have died because of foolish people.

Of course, it would be impossible for the authorities to physically remove huge numbers of people from dangerous areas. But if laws were passed imposing jail sentences for people who refuse to evacuate, most would comply. Then there would only be a small number of really stubborn people who would have to be forced to evacuate.

I’ve heard all the reasons people give for "riding out the storm." They mostly have to do with protecting their property from the elements and from looters. First, a bunch of sandbags won't do anything when the flood waters reach your roof. In fact, nothing you can do if you stay will protect your home or business in a really bad storm. Second, looters aren't going to be interested in your waterlogged furniture and your ruined big-screen TV.

Earlier this week governors and mayors were begging people to evacuate to safer areas. They even told people to write their names on their arms with a marker so their bodies could be identified. In support of their pleas I posted this on my Facebook page (www.Facebook.com/DrTom.TV - please go there and Like it):

As a former Rescue Squad officer, firefighter and paramedic, I have participated in many evacuations. While knocking on doors I encountered some of the same foolish people we've been seeing on TV. "I'm going to have a hurricane party!" "I've ridden out hurricanes before, and I made it." Unfortunately, after the storm passed we pulled the dead bodies of some of those same people out of flood waters and crushed buildings.

If there's a mandatory evacuation in your area, listen to the authorities. Even if you make it through without injury, you could spend weeks without power, clean water or sanitation. It's not going to be just coastal areas in North and South Carolina. The storm is headed inland, and it will drop tons of water in the mountains. Guess where gravity is going to take all that rain? It's going to rush back to the coast, creating secondary flooding that could be worse than the initial flooding.

Finally, please don't endanger the lives of first responders. They take enough risks in their normal service. Don't make them take unnecessary risks because you were too stubborn to heed their warnings, and now you realize you're in danger. In any case, they may not be able to come to your aid even if they want to. Roads will be flooded or washed out; bridges will be down; and there will be trees and power lines in the road. Please. JUST GET OUT!

I heard numerous people tell reporters that they had planned to evacuate when Florence was a Category 4 hurricane that could become a Cat 5. But when it dropped to 3, then 2, and finally made landfall as a Cat 1 they decided to stay. Now they regretted that they had thought they were smarter than the experts.

The category of the storm is just part of the picture, although it is certainly an important part. The other part of the equation is the forward speed of the hurricane, which determines the amount of water it will rain down on the land. This, in turn, has much to do with the amount of life-threatening flooding that will occur.

If the people who decided to stay because the category (which is measured by the hurricane’s wind speeds) decreased had also listened to the repeated warnings that the extremely slow speed of the storm would drop unusual amounts of water, they would likely have made a different (and better) decision. The meteorologists told anyone who would listen that the slow forward movement of the storm would rain trillions of gallons of water on land that was already water-logged. Since it made landfall, Florence has mostly moved more slowly than people walk.

I am somewhat of an expert on hurricanes. Not because I have any formal training in the area, and not because I was the Disaster Services Chairman for the Red Cross. (We didn't have any hurricanes while I had that post). My "expertise" is simply by dint of long experience with hurricanes that have struck us here in South Florida. Of the ten cities most often hit by hurricanes, all but two are in South Florida. In the last 60 years, I have lived through several hundred hurricanes – actual and threatened. That includes tropical storms that were supposed to develop into hurricanes but didn’t; hurricanes that were supposed to hit us, but didn’t; hurricanes that hit us, but which did little serious damage; and the occasional “big one” that caused death and devastation.

The most memorable to me were two hurricanes that hit us exactly three weeks apart in 2004 – Frances and Jeanne. Frances was our anniversary present. It moved very slowly, then stalled just off the coast, sucking up huge amounts of water from the ocean and dropping it on us 18 miles inland. With the ground soaked and the canals full, Jeanne paid us a visit and did pretty much the same. The result was massive flooding.

Our house sits 1 ¼ acres and has a ¼ pond. Following the flooding, we had a one-acre pond and a ¼ acre house! The road in front of us had several feet of water covering it, so the houses next to us and across the street were connected to ours by one huge contiguous body of water. Fortunately, the building code requires that houses be built three feet above the crown of the road, so we didn’t get water inside the house – but it was close.

The reason these two hurricanes stick out to me is that neither hit us with hurricane winds – we were located in the outer bands, and therefore had no wind damage other than a few tree branches knocked off. But we had weeks of flooding that caused massive damage to homes, churches, and businesses. These storms were similar to Florence in that they moved slowly. In some cases, they actually stopped moving but continued to drop tons of water on us.

We didn’t receive an evacuation order with these storms. But on other occasions, we did, and guess what – we evacuated. Yes, it was a hassle getting back to our home. Yes, the roads were as choked with people returning after the “all clear” was given as they were with people leaving in the evacuation. And, yes, evacuations are difficult, confusing, and expensive. And no one wants to leave their home and belongings to an uncertain fate.

Hopefully, you will never face a decision about evacuating. But if you do, remember this: You can replace computers and appliances. You can't replace your life or those of your loved ones.


POSTED IN A CHAT ROOM:

I found a number of posts on this subject giving people's thoughts and experiences regarding Mandatory Evacuation orders. I thought this, from a woman who evacuated New Orleans prior to Katrina, was particularly poignant.

"I get it. My entire life, multiple times a year, we had a mandatory evacuation. “We aren’t gonna stay to rescue you!” The police knocked on doors and insisted we all leave. It wasn’t easy especially for the elderly, sick, and those with small children. And it was costly- you had to drive upwards of 4 hours away and get a hotel room. And where do you put pets? "And every time, it was for nothing. We all got sick of it. We all began ignoring many warnings. "Then there was Katrina. 40 feet of water covered my little beach town and not a house was left in survivable condition. The only people I know who stayed and did NOT die (out of many) escaped to their sailboat and were granted a long series of miracles. We all returned to find our stubborn neighbors lying beneath the debris in our own yards.

"So now my family always evacuates".