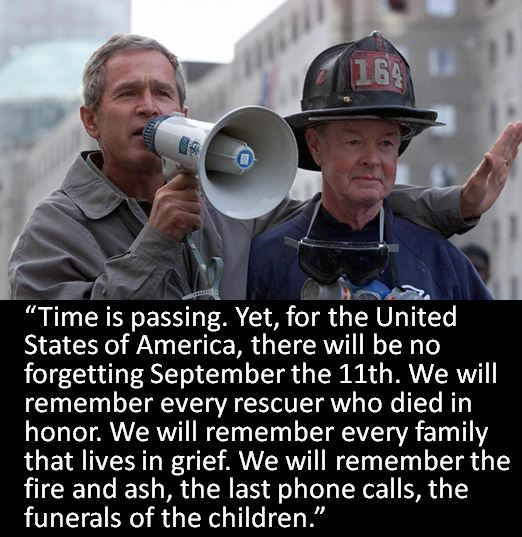 Even before the Holocaust had ended, Jews were imploring each other to record what had happened. Those who fled, those who were hidden by Christians, and even the Jews in the death camps wrote down what happened.

When Jews say "Never Forget" it's not a slogan. It's a reminder to the world of the horrors they experienced at the hands of the Nazis. We talk of the six million Jews slaughtered by Germany. To put that in perspective, six million people was one-third of the world's Jewish population at that time. ONE-THIRD.

Like the Jews, America can never forget what happened 17 years ago on 911 - and who did it to us. Let me declare the truth that Obama seemed incapable of uttering: Islamic terrorists slaughtered almost 3,000 Americans on 911.

Most people seem to be trying to erase history by insisting that the word "radical" always precede the phrase "Islamic terrorists". This is like the historical revisionists who always insist that when we speak of the Holocaust, we must state that it was the Nazis who killed 6 million Jews.

The Nazis didn't carry out the Holocaust. Germany did. Hitler was not a dictator. Germans ELECTED him. As a nation Germany despised Jews. Otherwise, the Nazis would not have been able to round them up, transport them so efficiently, and build death camps to exterminate them like animals.

To be sure, not all Germans participated in the Holocaust. But most Germans turned a blind eye to it, even though it was clear what was happening. Yes, there were Germans, mostly Lutherans, who risked their own lives to save Jews. But the Holocaust could never have happened without the acquiescence of the majority of the German population.

Germany (and much of Europe) is still largely anti-Semitic. Author Tuvia Tenenbom accepted a contract from a German publisher to write a book about modern Germany. She was shocked to find that “the majority” of Germans were still prejudiced against Jews (although they chose their words carefully when expressing their thoughts). When she submitted her manuscript the publisher "flew into a rage." He wouldn't publish the book unless all references to those attitudes were removed - including “a chapter about a club that preached the killing of all living Jews."

No other German publisher would touch it. Shockingly, no American publisher would either. They were fearful of angering a major U.S. economic partner. Finally, a Jewish publisher in New York printed the book. After it received glowing reviews, one of the biggest publishers in Germany made it available. Initially German critics and politicians "went ballistic." But once the truth of the book was established, it made the top ten of the German version of the NY Times Bestseller list.

Just as the world made excuses for the Germans who allowed the Holocaust to occur, they immediately came to the rescue of Islam in the wake of 911. President Bush was calling Islam “the religion of peace” within weeks after Islamic terrorists, supported by Islamic nations, perpetrated the most horrendous attack in history on American soil. I’m not sure exactly when George Bush became a theologian qualified in the Muslim religion, but I would debate him on this point any time and any day.

Better yet, he should learn from Dr. Nicholas F. Papanicolaou, the author of "Islam ss the United States." He shows from the Koran itself how violent the teachings are, and how the leaders of the religion encourage violence against Christians and Jews (which the Koran refers to as “pigs and dogs” – the worst possible insults in their religion).

The book’s description states, “This book examines the historical, Koranic, cultural, political, and all-conquering character of many of the followers of Islam. It also exposes the strategic plan of the Muslim Brotherhood for the USA, the as yet unfulfilled obligations of the Islamic States under the UN Charter, the Universal Declaration of Human Rights, and the Organization of the Islamic Conference and its fifty-six member states.”

What I find most interesting about the book is that it shows how Muslims selectively quotes parts of the Koran written in Mohammed’s early days when he was in the early stages of inventing his religion. And they ignore the parts written later in his life, which show his true nature. These include admonitions to kill non-Muslims, and promises rewards in the afterlife to those who obey. That’s why thousands of mosques are used to hide bombs and weapons. And that’s why so many mosques are virtual indoctrination centers for terrorists.

Again, not all Muslims are terrorists. I have met some wonderful Muslims that I consider friends. But like the Germans, they refuse to repudiate the hatred taught by their leaders. And they continue to attend the mosques where young men are told of the glorious rewards granted to suicide bombers. As long as they tacitly support the haters and murderers, they cannot be called innocent. And Islam cannot be called “the religion of peace.”

Finally, do you know who Hitler’s greatest admirers are today? They are the Imams of Islam. That makes sense. Both the Imams and the Nazis hate Jews. Both yearn for world domination. And both believe that the only righteous government is one in which they have complete control, and the people have no say in what happens to them.

Please don’t be fooled. Although we don’t hear so much about them today, the Islamists still hate America and intend to destroy it. National groups like CAIR (the Council on American-Islamic Relations) make moderate public statements about peace and love. But they still support terrorism.