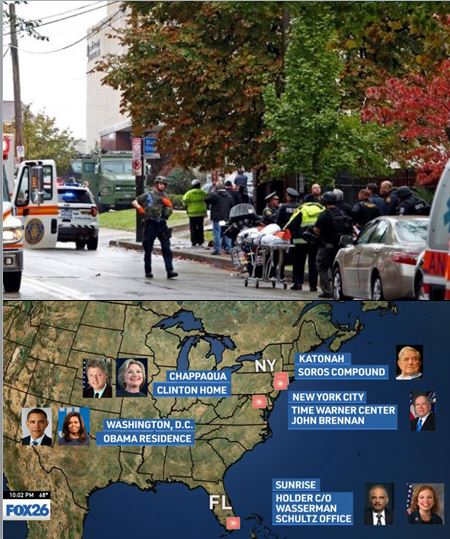 Just in time for the mid-term elections, America has experienced two traumatic events that have captivated the 24-7 news cycle. The Democrats and the media have blamed President Trump for both, as they do for almost everything. (It was recently discovered that in addition to causing "global warming," Trump was also responsible for the sinking of the Titanic.)

The first was the thirteen "bombs" sent to Democrat officials and donors. Trump was obviously to blame for that because the sender had Trump bumper stickers all over his van. Case closed.

Two things are interesting here. Democrat Senator Robert Byrd was the longest-serving Senator in U.S. History, and the top Democrat for much of that time. He served as the Senate Majority Leader and the President Pro Tempore. In the second job, he was the third in line for succession to the presidency. He was also a high-ranking member of the Ku Klux Klan in his younger years. You never heard Democrats call their presidents Klan members, just because one of their top leaders was. But because an obscure guy who lived in a van was a Trump supporter, they want to blame Trump for the crazy guy's actions.

The other interesting thing is that no one got hurt. If this guy had intended to actually harm someone, at least a few of the thirteen "bombs" would have exploded. According to the FBI, some of the components for a bomb were present - notably black powder and shrapnel. But there was no trigger mechanism, so they couldn't have gone off. One bomb expert described the devices as "typical TV show bombs." You know, the ones where the bomber politely leaves a countdown clock with bright red numbers so the bomb disposal people know how much time they have left to defuse it. He said that real bombs never have that.

Also, these were not pipe bombs. CNN gave them that name when they received one addressed to John Brennan. But pipe bombs require pipes. These were made of PVC and then wrapped with black electrical tape so people would assume they were real steel pipes. What's the difference? Metal pipes are strong enough to hold the explosion inside long enough to build up intense destructive pressure. If the PVC devices had had triggers and had gone off, they would have melted or cracked open immediately and basically fizzled (the blast range would have been very small).

The second event was the tragic shooting in the Pittsburg Tree of Life Synagogue. Eleven people in a Shabbat service were killed, and six others (two members and six police officers) were injured. CNN, ABC, NBC and the other liberal news outlets gleefully blamed Trump for this. One interviewed Howard Dean, the failed Democrat presidential candidate who blew his own campaign up by screaming wildly during a rally. Dean claimed that Trump's hatred caused the shooting, and said that the president was "pure evil." None of these idiots considered the fact that Trump's daughter and grandchildren are Jews, or that he was the only president (out of four who had made the promise) who kept his promise to move the U.S. Embassy in Israel to Jerusalem.

But the real disappointment for the Democrats was when they found that the shooter hates Trump just as much as they do. His rantings reveal that he thought Trump was evil because he moved the U.S. Embassy in Israel to Jerusalem! Since that revelation, the coverage of the shooting has changed dramatically.

In summary, the first event was designed to strike fear into the hearts of the recipients - but not to kill them. It was perpetrated by a supporter of President Trump.

The second event was designed to kill as many Jews as possible and was tragically successful. In this, the perpetrator appears to hate the President for his support of Jews almost as much as he hates the Jewish people.

Conclusion: Even though the bomber killed no one, that story will continue to be featured because he supports the President. And despite the fact that the shooter killed eleven people, the story will be downplayed because the killer hates Trump.

If you're a liberal, this is very logical.


INTERNET RESEARCH:
Why haven’t these bombs gone off? Because they’re meant to terrify, not kill.
https://www.washingtonpost.com/

When Democrat Senator Byrd Was Considered for the Supreme Court, his KKK Background Stopped Him
http://wvmetronews.com/2018/07/11/once-upon-a-time-when-senator-byrd-was-considered-for-the-supreme-court/

Democrat Opposition to the U.S. Embassy Move to Jerusalem
https://www.timesofisrael.com/democrats-conspicuously-absent-from-israeli-embassys-dc-party/