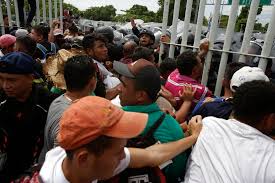 A supposedly spontaneous caravan of Central Americans is heading North to overwhelm the U.S. Border Patrol and force us to allow them in. It is timed to arrive just before the Mid-Term Elections. (I'm sure that's just a coincidence.)

Think, my friends. The timing, the huge costs, the logistics. It has the fingerprints of desperate Democrats all over it.

BREAKING NEWS: It was announced today (10/20/2018) that thousands of Central Americans in the caravan violently forced their way across Guatemala's border with Mexico. They destroyed Mexican federal property and injured several Mexican officers. Sounds like just the type of people we want in the U.S.