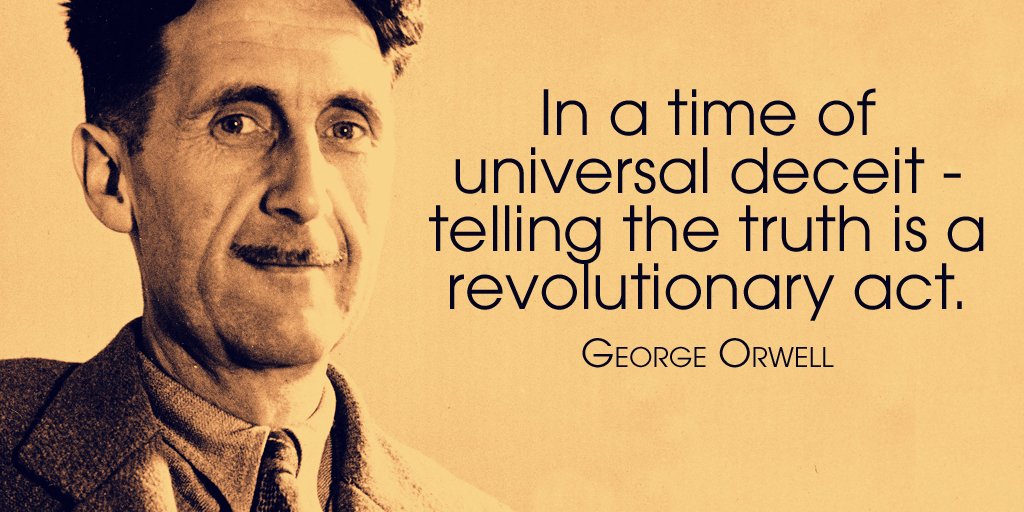 George Orwell's words, "In a time of universal deceit, telling the truth is a revolutionary act," are just as true today as when he first penned them. In fact, they are probably truer now than then.

I have never considered myself a revolutionary, but I have always been passionate about the truth. People ask me why we do what we do; why have we published Conservative Truth every week for almost 20 years? The answer is very simple. With so many people telling outrageous lies, someone needs to tell the Truth.

Who is doing all the lying? The first group that comes to mind is politicians. According to a June 2018 Gallup poll, Congress has the lowest trust rating among all institutions. Only 11% of Americans trust our top legislators. For most people, the news media is the next lowest. Television and newspapers both rank below 25%. And organized labor ranks at 26%. Banks and the school system ranked only slightly better.

Since the media is only trusted slightly more than Congress, and since my chances of becoming a legislator are slim to none, it seemed that the place where I could do the most good was in the area of disseminating Truth to counteract the lies of the media. So Conservative Truth was born.

I looked up our original mission statement to see how well we have done at accomplishing what we promised almost two decades ago. We said, "If you're tired of the same old liberal slant that the major media give to the news, you'll find Conservative Truth a breath of fresh air." We have readers all over the world, including military stationed overseas, expat Americans, and missionaries. We regularly hear from them that it is hard to get factual news from the U.S. and that they look forward to each issue. So I guess we have succeeded in that area.

We stated, "Conservative Truth reports on news that the major media censor. We offer original commentary on the major moral, social and political issues of the day from a Biblical, moral conservative viewpoint. We're not ashamed to say that America is the greatest country on this globe, but neither are we afraid to point out areas where our politicians are leading us astray." We at Conservative Truth are proud patriots. But being patriotic doesn't mean supporting bad actions by our government. In fact, it means the exact opposite."

"Most Americans believe that patriotism is a good thing; that government should be kept out of religion, but that our Founding Fathers never intended to keep religion out of public life; that murder of an unborn child is wrong; that homosexuals should not be given special privileges; and that our children should not be taught revisionist history which makes them ashamed to be Americans. Why then are the voices of the great majority of Americans not being heard today? Because we have allowed the liberals to take control of our schools, our courts, and our media." We believe we represent the views of the great majority of Americans. Even many Democrats believe in these values, but they have been lied to by their party in order to keep them loyal. Until we root the Liberals out of our major institutions, lies will continue to prevail.

92% of the producers, anchors, editors, and reporters that decide what news you are allowed to see are registered to vote either as Democrats or Socialists? 100% of the Editorial Staff and writers of Conservative Truth are Conservatives; Christian Constitutionalists, Republicans, and Libertarians. Most of the media knowingly lie to advance their Liberal Socialist agenda. Some of them have lied so much and for so long that they have actually started to believe their own garbage.

The bottom line: If no one tells the truth, no one will hear it. It sounds simplistic, but it is actually profound. Many good people have stopped trying to counter the lies because their voices were being drowned out. Our goal is to give you facts and logical arguments you can use when you are confronted with liberal lies. If we keep telling the Truth we can eventually drown out the lies - because Truth is righteous, and righteousness always prevails.

So be a Truth-teller. Don't be afraid of the bullies of the PC police. Do something revolutionary today. Call out the liars and spread the Truth. When Jesus said, "You shall know the truth, and the truth will set you free," He was speaking of the truth of the Gospel that breaks the chains of sin and allows us to have fellowship with God. But it is also a fact that Truth in the temporal world brings freedom. Ask the Lord to help you cleanse your mind of all the lies you have been told, and to help you recognize Truth when you see and hear it.

Never forget this: Regardless of what the liberal left would have you believe, you live in the greatest nation that has ever existed on the earth, and God is still in control. That is the Truth, my friends.