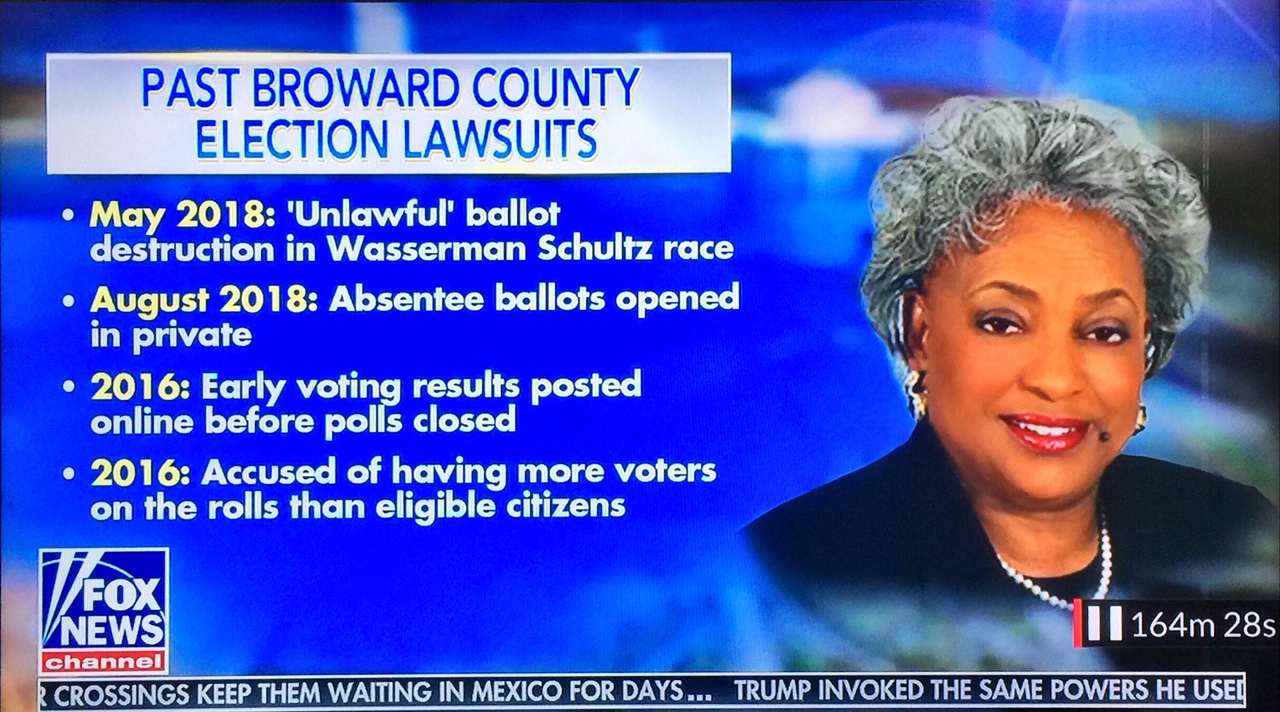 Broward County has made Florida the laughing stock of the nation - again. In the week since this election, Broward and Palm Beach Counties are the only two in Florida (out of 67) that have been unable to count their votes. Even the counties in the Panhandle of Florida that were hit by their worst hurricane in history, did their duty in this election.

If you look at the Broward Supervisor of Elections, Brenda Snipes, you will find that she is both grossly inefficient and supremely corrupt. Her entire department is hopelessly incapable of performing its duties. And she (and possibly some of her underlings) has been proven to have violated election laws.

In 2003 the Supervisor of Elections was removed by the Governor of Florida for corruption in office. Snipes was brought in the clean up the department, which was mired in scandal. Recently she was asked by a reporter how many of the employees of the disgraced department she fired when she took control, she said, "Not one."
Instead, she carried on the department's tradition of Democrat partisanship and corruption. In 2016 she was found to have more voters on her rolls than there were people eligible to vote in Broward County. Does this remind anyone of Chicago?
Later in 2016 she illegally posted early voting results online while the polls were still open. This was an obvious attempt to suppress the vote of those who had not yet gone to the polls.
Earlier this year she was found to have opened absentee ballots in private, giving her an opportunity to destroy Republican ballots with no witnesses. There is no proof that she did so, but the reason election laws exist is to make sure it is impossible for corrupt individuals like Ms. Snipes to rig the vote. She also violated Florid'as Sunshine laws in this illegal act.
Finally, in May of this year, a judge ruled that she violated both state and federal election laws when she knowingly destroyed ballots that the Court had ordered her to preserve.
Most recently, in the mid-term election, Circuit Judge Carol-Lisa Phillips ruled that Snipes was in violation of Florida public-records laws for not fulfilling a request for information by Governor Scott’s campaign.
Now, every day since Election Day, Snipes is "discovering" new caches of votes. A teacher supposedly "found" a box of ballots in a closet in a school that was a polling place. The ballots should never have been any place that was not in public view. And I'd be willing to bet that the teacher who "discovered" the ballots is an activist Democrat.
Interestingly, although Democrats outnumber Republicans by less than two to one in Broward, more than three in four votes recently found were Democrat ballots.
This has been a favorite tactic of the Democrats since the 2000 election. In my county, Palm Beach, three personal vehicles of Democrat election officials drove around for hours after the polls closed with thousands of ballots in their trunks. Why? They were rigged votes, and they didn't want to risk law enforcement discovering the forgery unless the ballots were really needed to "win the election. Keep in mind that it is NEVER legal for votes to be carried in personal vehicles.

1) Why have Ryder trucks been videotaped entering the Supervisor of Elections complex daily since the election?
2) Since ALL votes had to be delivered on Election Day, what are these trucks delivering?
3) Why did it take a judge's order and a threat of contempt of court for you to allow observers to see your process?
4) Why did you allow illegal aliens and felons to vote in the mid-terms (the amendment allowing felons to vote wasn't passed until the election)?
5) Why did you mix good provisional ballots together with ones that had been rejected - and then count them all as good?
6) According to your own records, voters registered as Democrats only outnumber Republicans by two to one. So why do almost every one of the newly "discovered" ballots favor Democrats?
7) Most important: Where did over 90,000 ballots magically appear from AFTER the law required all ballots to be in your custody?
Broward County has made Florida the laughing stock of the nation again. In the week since the election, it and Palm Beach County are the only two Florida counties (out of 67) that have been unable to count their votes. Even the counties in the Panhandle of Florida that were hit by their worst hurricane in history, did their duty in this election.

In the Bush-Gore election, the Broward Supervisor of Elections played the same dirty tricks as Snipes is using today. The vote-rigging in this one county almost cost Bush the 2000 election. If we don't pray for righteousness to prevail, Snipes may also cost Senator-Elect Scott and Governor-Elect DeSantis their legally won elections.
Copyright ©2018
Read more by Dr. Tom Barrett
Tweet