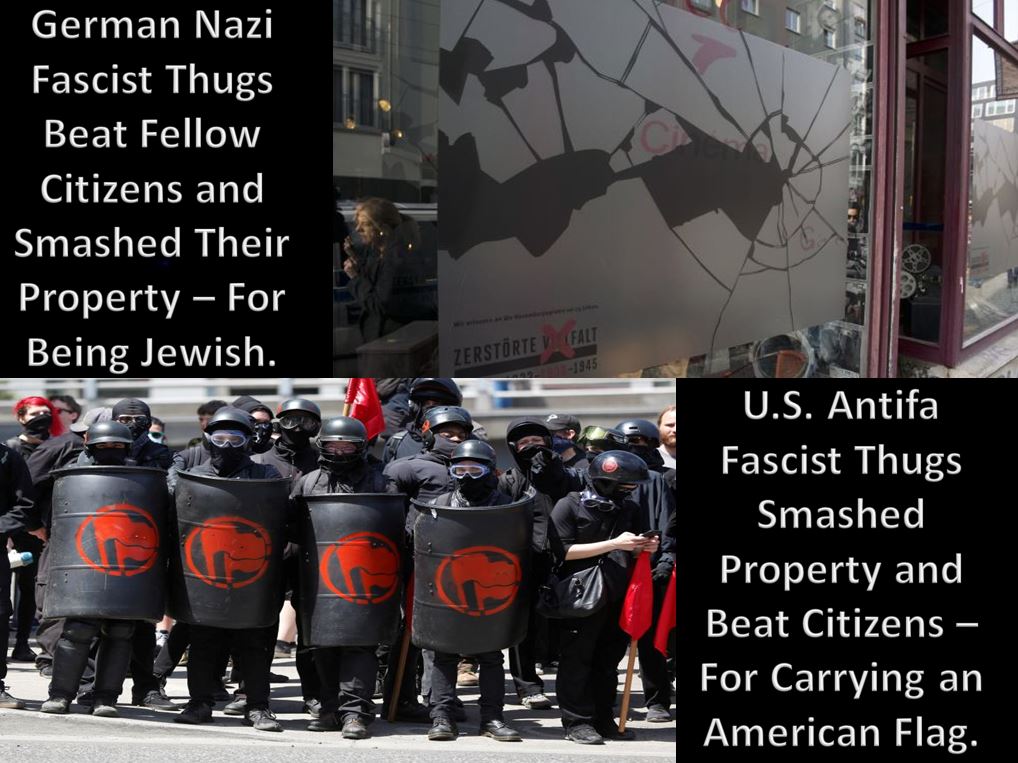 When I realized that today was the anniversary of “The Night of Broken Glass,” I immediately thought of Antifa. Recently a mob of Antifa "protestors" vandalized the home of a Fox News anchor, smashed in his front door, and terrorized his wife. The Jewish Holocaust started this way.

At first, it was an occasional home or business vandalized, or a mob beating up a defenseless Jewish woman. Emboldened by the fact that they got away with that, the escalated to "Kristallnacht," in which 4,500 Jewish businesses were destroyed, and 100 Jews died. In international community was outraged, but did nothing.

The next inevitable escalation was the Holocaust itself. Six million Jews were first deported, then methodically murdered.

Antifa is supposed to mean "Anti-Fascist." But they are Fascists themselves. The fact that they support (and are supported by) the Left in this country means they get a pass in the press. But they are the same murderous thugs who, drunk with power, vented their rage against tens of thousands of helpless Jews in two days of "Kristallnacht".

So far they have only injured and attempted murder of conservatives who don't share their radical views. No one has died - yet. But they have smashed the glass of dozens of colleges and universities to protest conservative free speech - and they have gotten away with it. And, inevitably, as the police are ordered to "stand down" by cowardly mayors, the violence will escalate.

Antifa should be declared a domestic terror organization, and its members arrested before they murder innocent citizens. Anything less is an abject dereliction of the government's first duty - to protect citizens