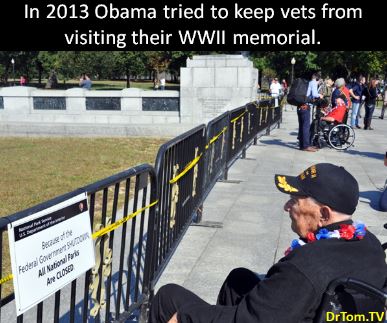 ast January I wrote an article titled "The Fake Government Shutdown." I could have republished that piece since we are now facing another supposed shutdown. But every instance is different, so I will highlight those differences here, and suggest that you read the "The Fake Government Shutdown." It discusses the realities of government "shutdowns" in more detail that I have room for today.

I will quote briefly from the previous article to set the stage. Here are the standard claims shouted by alarmists about what would happen in a "shutdown" everytime the nation engages in this political game:

1) Children would die (a favorite among political alarmists)
2) Seniors would not get their Social Security checks (almost as popular)
3) National security would be jeopardized since troops would be laid off
4) Planes would be grounded (or crash) because there would be no air traffic controllers
5) Houses would burn down and citizens would be burned alive because firefighters would not be paid (almost all of them are paid by local governments, not the U.S.)
6) VA hospitals would shut down and veterans turned out into the streets.
7) Grandma would be pushed off a cliff in her wheelchair (this was actually depicted in a Democrat ad)

None of this happened in the last "shutdown" - nor in any of the other 18 fake "shutdowns" we have managed to survive since 1976.

Here's a thought. If these employees are "non-essential" why does the government pay them in the first place?

Other "essential" government workers continue to work, but don't get paid temporarily. The will receive their back pay in time, and there is no question that it is an inconvenience. But none of them will starve.

In this particular case, 75% of government services for 2019 have already been funded. These include the military, the VA, Social Security, Medicare, and Medicaid. And, of course, Congress has already made sure it will get paid no matter what.

So, what will be shut down? That's at the discretion of the president. During the 16-day Obama 2013 shutdown, he selectively shut down certain services with two goals in mind: (1) Cause the maximum amount of pain. (2) Score as many political points as possible. For instance, he shut down the WWII Veterans Memorial, knowing that planeloads of vets were flying to D.C. to visit it. The irony was that no personnel were posted there - it is basically an open park. He sent park police there to erect barriers and keep the veterans out. The vets ignored them, moved the barriers, and visited their memorial anyway.

Fortunately, during the short-lived "shutdown" that occurred early this year, Trump used his discretion to keep the WWII memorial and most federal monuments open to the public. If it comes to a showdown, he will undoubtedly do the same again.

What is the potential showdown about? Nancy Pelosi has promised that the President will not get one penny to pay for the border security that our nation so desperately needs. The recent "caravans," with thousands of people trying to force their way into the U.S. points up the need for more and better security. These people crashed through the border fence between Guatemala and Mexico and attacked Mexican border guards. They tried to do the same at the U.S. border and were turned back - but not before they injured U.S. border agents.

They have camped out in Tijuana, Mexico, ruining that cities tourist economy. More than a third of them have contagious diseases, and the U.S. Department of Homeland Security has determined that they harbor among they hundreds of criminals and MS13 gang members. Most recently, a group of them have said they will force their way across our border unless Trump pays them a $50,000 per person to return home.

Pelosi, Chuck Schumer, Obama, Joe Biden, Hillary and dozens of other Democrats voted for the Secure Fence Act of 2006, saying that it was vital for our national security. But today every one of them opposes it - because Republicans (and the majority of Americans) want it.

The irony of this is that the Obama 16-day shutdown in 2013 cost the government $24 Billion. Most of that was for "paid vacations" for employees who were furloughed but received back pay one the shutdown ended. Trump is asking the Democrats for $5 Billion to repair the border wall and erect barriers where the illegals are getting through. That's about one-fifth of the cost of the Obama shutdown. Wouldn't it be better to spend that money securing our border than to pay government employees to not work?