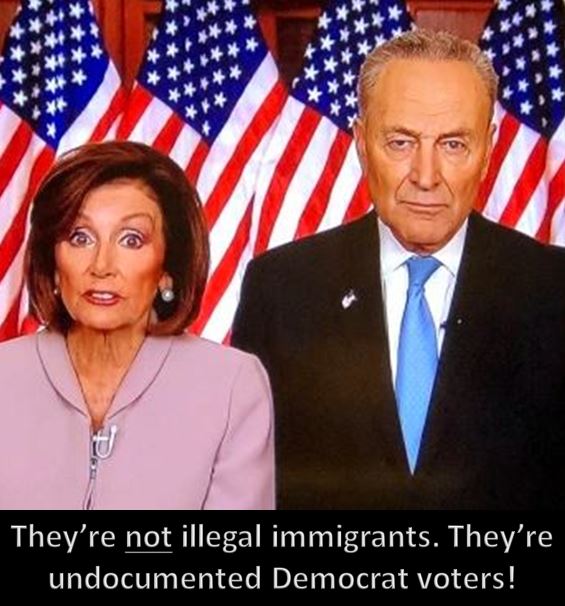 Republicans are suicidally naive. They think that because they would never stoop to certain really terrible, disgusting, and unconstitutional behavior, neither would the Democrats. Clearly, they don't understand how depraved the Democrat Party has become, and that its lust for power is insatiable.

And, just as clearly, Republicans haven't read the Democrat Party platform. That is as stupid as having the enemy's battle plan for an imminent war, but not taking the time to study it.

Here's what will happen within the next ten years:
Do you think I am exaggerating? I am not. If anything I haven't stated the cases as forcefully as it should be stated. The Democrat leadership knows all this; after all, it's their plan. The worst part is that the Republican leaders also know the plan, and they're doing nothing to thwart it - because they think they are powerless.

Instead, they are preparing to save their own hides when the worst happens. Many Legislators have obtained dual citizenships. No one knows for sure how many of our senators and representatives have divided loyalties, but estimates range from two dozen to ninety. Congressional profiles require disclosure of one's religion, but not the country of their birth or whether they hold dual citizenship. Strange. The first should have little impact on their decisions. But swearing allegiance to two nations at the same time could be a serious problem - particularly if the nations were in conflict. Regardless of this danger, our lawmakers continue to apply for and receive citizenship from other nations - perhaps so they can quickly immigrate if things get tough in the U.S.

If they have to make a run for it, a big bag of cash would be handy. A few legislators come into office with millions of dollars - but the great majority do not. The median net worth of our senators and representatives is now over $1 Million. As the article linked below asks, "How do Members of Congress get so wealthy?" For starters, the lowliest newbie Member of Congress - like the bartender from the Bronx - makes almost $175,000. That's 350% of the median salary of those of us who pay their salaries. But then they start gathering the goodies from lobbyists - campaign contributions that are often illegally used to enhance their personal lifestyles; lucrative speaking gigs; huge advances on books they often never write. Many of them stash much of this away for a rainy day - such as the day they may need to move to another country.

If anyone questions which party illegals will vote for, just look at the interviews with the people in the "caravans". Today one said, "We don't like Trump's wall. All borders should be open. The Democrats understand this, and they will help us." This was just one of many such statements by illegals trying to force their way into our country.

Are they right? Just look at the Democrats actions, and you will know they are. Democrats oppose every form of voter identification laws proposed to protect the sanctity of the voting process. They required photo ID to enter the Democratic National Convention. But they say it is "racist" or "discriminatory" to require voters to provide such ID before entering polling places. They claim that it is hard for minorities to get valid ID's. If I were black or hispanic, I would be insulted by those statements. The Democrats are basically saying that people with darker skin are not smart enough to go to a government office, fill out a form, and get a state ID if they don't have a driver's license.

For decades the Democrats have advocated for illegals to become citizens. They have used two tactics to accomplish this. When Ronald Reagan was present there were three million illegals living in the United States. The Democrats convinced him to sign an amnesty for them, promising that they would then work with Republicans to work toward "comprehensive immigration reform" that would prevent that problem from ever recurring. Regan signed The Immigration Reform and Control Act in 1986. It reformed nothing, and it controlled nothing because the Democrats lied.

The second tactic Democrats have used to convince all politicians that we must give amnesty (along with citizenship and the right to vote) is the "It's impossible to fix it!" argument. The people who have systematically thwarted efforts to secure our borders and have made it more and more difficult to deport illegals, now say, "There are just too many. How can we send 11 Million people back where they came from?"

Yes, most Democrats still cling to the false 11 Million number. That number hasn't changed for years, even though over three million illegals pour over our borders every year. The main reasons we're still stuck on a false number is that the government keeps the number low to avoid alarming people; and most of the data used to come up with the 11 Million estimates are taken from the census. The census is only done once every ten years. And it is voluntary. How many illegals do you think fill out census forms?

Look at the study done by Yale University referenced below. I don't have the space to go through their methodology, but it is far more accurate than that used by the government. Note that Yale is a very Liberal institution, yet its study shows that the real number of illegals in the U.S. is 22 Million - double the number we have been fed for years.

Why is this a problem? The Washington Times recently reported on a study that predicts that Europe will have a Muslim majority in the next two generations. France will be first, with Muslims taking over that nation by 2050. Germany won't be far behind. The U.K. has been somewhat more circumspect in the number of illegals it allows, but the Muslim population there is expected to triple by 2050 - 31 years from now. There are multiple causes. Government leaders allow millions of "refugees" to enter their nations without any type of vetting. There are very few border controls (in some cases, none). And in France, for example, the native birth rate is only 1.4, while among the Muslims in France it is 4.0.

Is this really a problem? Not if the French don't care if their nation becomes an Islamic caliphate. Not if they don't mind Islam becoming the required national religion (as it is in every nation where there is a Muslim majority). Not if they are unconcerned about France's culture being lost and replaced by a medieval Middle Eastern culture. And if they don't care about their economy being destroyed, it is not a problem. (Will you vacation in Paris after the Muslims take over? I certainly won't.)

How does a Muslim takeover of Europe relate to a takeover of America if illegals make up a majority of our country? Well, education levels will certainly drop. Skill levels in the workplace will plummet. At a time when we desperately need better educated and more skilled workers to continue to grow our economy, the immigrants coming across our Southern border have very few skills, and only 16% have been educated at the equivalent of a U.S. 12th grade. Less than a third speak English proficiently.

Try to imagine the first election after all these illegals have become U.S. citizens. The great majority will know nothing of our Constitution or how our political system works. They won't understand most of the political news, even if they have some proficiency in English. But don't worry. Spanish-speaking Democrats will gather them together and explain to them how to vote. "Just look for the people with 'D' beside their names." This is the same thing Obama's Acorn organization operated. They pretended to be a voter registration organization, but as soon as they had the poor, uneducated people sign their forms they told them to vote for Obama and Democrats only. (There are videotapes of this happening, but none of them were ever prosecuted.)

So when you try to understand why Democrats don't care that millions of illegals enter our country every year; why they are unconcerned that there are documented instances of murderers, rapists, drug traffickers and terrorists in the "caravans," and why they are willing to shut down our government to prevent the building of a wall that would protect our nation and our way of life - consider this formula. One illegal immigrant = one future Democrat voter.

Why Democrats Will Win Every Presidential Election After 2020
http://www.conservativetruth.org/article.php?id=7097

Yes, Democrats are the Party of Open Borders
https://www.investors.com/politics/editorials/illegal-immigration-democrats-open-borders/

There Are No Jobs that Americans Won't Do
https://cis.org/Report/There-Are-No-Jobs-Americans-Wont-Do

Europe to be Majority Muslim in Two Generations
https://www.washingtontimes.com/news/2017/sep/26/muslim-majority-in-france-projected-in-40-years/

How Do Members of Congress Get So Wealthy?
https://www.theatlantic.com/politics/archive/2014/09/how-did-members-of-congress-get-so-wealthy/379848/

Dual Citizenship in Congress? We Need to Know
https://www.foreignpolicyjournal.com/2018/12/10/dual-citizens-in-congress-we-need-to-know/