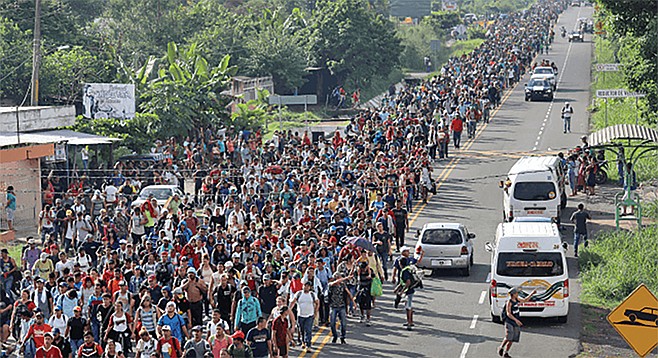 Imagine the absolute outrage you would experience if you found that the state that did this was your own. You would do everything you could to see that any state employee who was involved in such a dangerous move was fired. And you would make sure that every elected politician who supported such insanity was never elected again.

Well, it’s happening right now in your state – or rather, your country. Using the current average number of illegals forcing their way into our nation, we will easily see more than a million invade the U.S. this year. “But surely the Border Patrol will arrest and detain them!” you may say. It’s complicated, but you would be correct: Thousands are detained practically every day. But because the detention facilities are meant for temporary housing, the great majority are released within days or weeks. 12,000 were released to go anywhere they wish in our country just this week.

Here are some facts you need to know (facts you won’t see on most news channels) before you agree with Democrats that walls are “immoral” and that anyone who wants to immigrate to the U.S. should be allowed in with no conditions.

If a Mexican citizen crosses illegally, the Border Patrol can send them right back. But if they are from Central America and set one foot in the U.S., we are not allowed to turn them around. This is an insane policy. It is just one of the many foolish immigration policies that the Liberals in Congress won’t allow the president to reform.

Many of the illegals have contagious diseases when they arrive here. It costs the U.S. millions of dollars to take care of their health needs – while many tax-paying U.S. citizens can’t get proper health care. This is just one of the many reasons that almost every nation has strict border laws. Try to move into Mexico without proper documentation and see how fast you are arrested.

Most of the people who are released are not screened in any way because so many are crossing that there are not enough agents to process them. Many are convicted murderers, rapists, drug smugglers, and sex traffickers. There are close to a million illegals who have committed serious felonies and have been ordered to be deported. They remain in the U.S. because of “sanctuary” cities and states, and Liberal politicians who take the president to court every time he tries to enforce our laws. Yet an idiotic Chicago columnist recently wrote an article with the title, “Immigrants in the U.S. illegally make us safer.”

The overwhelming numbers mean that in most cases all the agents can do is issue an order for the illegal to appear in immigration court. Not surprisingly, 99% never appear; they just melt into the U.S. and live in the shadows.

More than half are repeat offenders who have already been deported. The first time an illegal crosses into our country it is a lower-level crime called a misdemeanor. The second (and in many cases, third, fourth, fifth and so on) time it is a felony. So when Democrats say they are “law-abiding citizens, they know they are lying. Every one of them breaks the law when they sneak through the places where there is no wall.

Almost every day the U.S. government drives busloads of these people into unsuspecting U.S. cities and drops them off for the local government to deal with. A few years ago the tiny town of Murietta, CA, blocked the road into their town and made the government turn around the busses that carried 140 illegals that were about to be “dumped” there – with no notice to the town.

“Open Borders” Democrats claim that these people just come here for jobs. But 63% of them end up on some kind of government assistance, at taxpayer expense. Compare that to 35% of native or legal naturalized citizen households. 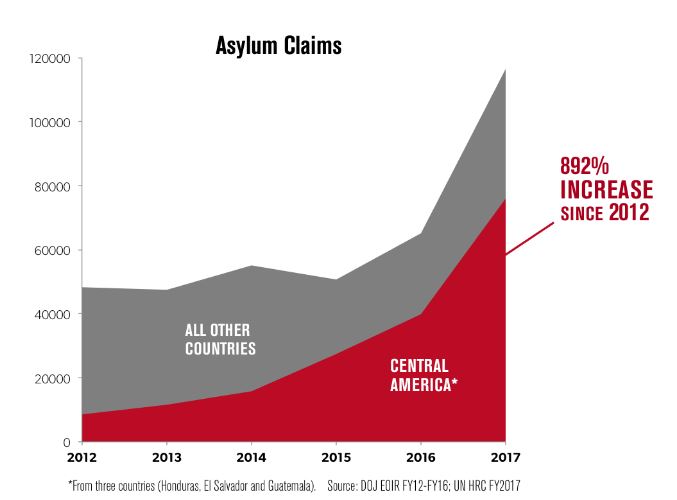 The ones from Central America supposedly come here to seek asylum. Asylum claims from Central America are up 892% in the last six years, since Democrat lawyers have started training them how to illegally enter the U.S. All they have to do is claim a “credible fear” and we open the door to them – even though 95% of these claims are eventually found to be false. That doesn’t matter, though. They’re here, they refuse to leave, and they become Democrat voters.

The long trek to America is dangerous. Thousands of people have been found dead in the deserts. Thousands more are never found. One of three women in the current caravans has been raped on the trip. One in four children is sexually abused. Entire truckloads of illegals have been found dead in the U.S., abandoned to suffocate in the heat by the “coyotes” (the human traffickers) they paid thousands to get them safely to the U.S.

Now the “coyotes” are getting more sophisticated. They hire huge buses which pick up the Central Americans as they illegally enter Mexico. Then they drive them across Mexico so that they can illegally enter the U.S. How can they afford to do this? The average charge is $5,000 to $7,000 per person. Which begs the question: How do these impoverished people pay these huge fees? In many cases, they are imprisoned in sweatshops and forced to exchange their labor for the fee.

America has a big heart. We do more than any nation on earth to help poor and suffering people all over the world. And we have an extremely generous legal immigration program that has made it possible for millions of refugees and other immigrants to make their home here. But, just as we cannot be the policeman of the world, we cannot be home to every person who lives in a lousy country and wants to live the American dream.

It’s just not possible. To put it into perspective, we have just 4.27% of the world’s population. We have only 6.1% of the world’s land mass. The very things that make this country so desirable to almost 7 Billion people would cease to exist if we allowed in even 5% of the people who want to come here. We would become just another third world, impoverished nation.

Why Do Democrats Want Open Borders?

Planned and Coordinated Attack on Border Patrol Agents by Illegals

26% of Federal Prisoners are Illegal Aliens

Illegal, but Not “Undocumented”

Asylum claims from Central America up over 800%, “Easy way to get in the door”