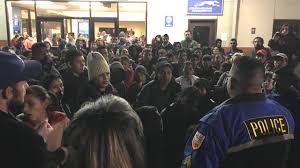 Some plans are good. Some are ingenious. But some are simply brilliant. The federal government has been dumping illegals in towns close to the border for decades, leaving the towns to support, educate, and provide medical care for them. It’s not fair that these towns and counties should shoulder the economic and social burden caused by the failure of Congress to pass real immigration reform.

Trump realized something many have missed. “Sanctuary” cities, counties, and states believe in open borders – so much so that they keep ICE agents from deporting even the most dangerous illegals, ones that have been convicted of violent crimes. Since these cities welcome illegal immigrants with open arms, and since many of the illegals know they will be protected there and want to go there – why not help the process along?

Instead of dumping the illegals where they are not wanted, why not take them directly to the “sanctuaries”? It seems like such a wonderful idea that I wonder why I didn’t think of it. But, shockingly, the Democrats who have professed such undying love for illegals are screaming with outrage. They don’t want these people flooding in and ruining their beautiful communities with their mansions and limousines and manicured lawns.

It’s like when all the politicians vote to build low-cost housing for poor people. The rich are avid proponents until the planners decide the perfect location would be one close to their gated communities. “Not in my backyard!” they cry in unison.

I was particularly amused when Trump mused about transporting illegals to Nancy Pelosi’s hometown. She’s perfectly happy to have hundreds of thousands of illegals dumped on the streets of El Paso and other border towns. But not one should be delivered to her precious San Francisco – a much larger city with far greater capabilities of providing food, shelter, schooling, and medical care for the illegals.

The reason this plan is so superb is that when the Liberals who insist on protecting violent illegals from deportation in their “sanctuaries” get a taste of what it’s like to care for tens of thousands of people who don’t speak English and need to have virtually everything provided for them, they will very quickly tell their Democrat Senators and Representatives to cooperate with the Republicans and pass legislation to take care of the current crisis at our Southern border.

The politicians who loudly proclaim that the crisis is “manufactured” would quickly change their tune if they did as many Republican politicians have done – actually go to the border and see for themselves. I haven’t been to the border lately, but I can tell from the photos and videos that there is a serious crisis that is growing by the day. The border patrol used to process 1,000 people each day. Now it’s 4,000 – and growing.

Apparently, Liberals aren’t smart enough to look at the news reports and see what’s going on. So perhaps it would be wise to pay for them to go to the border and see for themselves.

Or perhaps it might be better to bring the border to them. Use Trump’s plans to deliver hundreds of thousands of illegals to their front doors. I’m sure Pelosi has a few spare bedrooms in her mansion. Once they see the magnitude of the problem they will beg the president to use whatever means he can to stop the flow of illegal aliens that threatens to destroy the very fabric of our society.

The Democrats are crying “foul” and saying that it is illegal to transport illegals across the country and abandon them. These are the same Democrats who have torpedoed any attempt to change the ridiculous laws that allow Mexicans to be immediately returned to their country when the cross illegally – but which allow people from other countries to stay once they set foot on American soil. But the Democrats have remained silent about the overwhelmed border officials flying, busing, and then abandoning illegals at public bus stations.

Now that it looks like their own cities are about to be invaded, they are proclaiming that the very policies they enacted into law – including the law that says border agents cannot detain families for more than 20 days – are “racist.”

It’s not “racist” to prevent people from breaking federal law and entering our nation to overwhelm our limited resources. In recent weeks Border Patrol officials have captured illegals from over 50 nations – including China. These Illegals include not just Hispanics, but also blacks, Asians, Arabs, Caucasians, and other races. So how is it racist to say “enough is enough?”

Trump is a great negotiator. Just the threat of taking certain actions – like tariffs on Chinese goods – has brought his adversaries to the table. Hopefully, just the threat of having to take care of hundreds of thousands of illegal aliens in their precious “sanctuary” cities will make the Democrats realize that now is the time to negotiate and end this immigration crisis.

Illegals Flown to Several States across the Nation – and Abandoned

Illegals from Georgia and Texas Being Flown to Arizona by Government

Hundreds of Illegals Dumped on the Streets of Texas