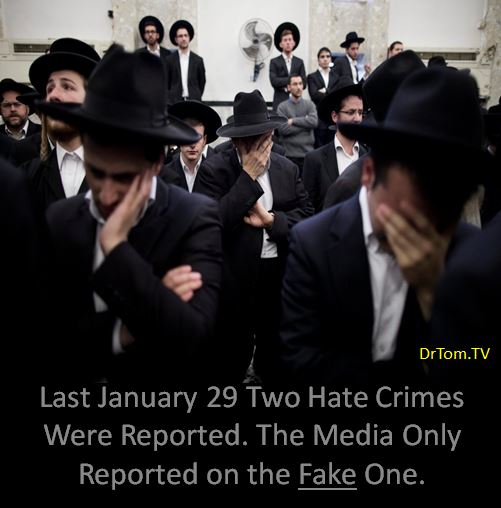 So why doesn't the media report hate crimes against Jews? Why did it, instead, give massive coverage to the January 29 hoax attack reported by a homosexual black, Jussie Smollett. (By the way, making a false police report is a felony, Jussie.) That same night, a Jewish man in New York was beaten by three thugs. Nothing was stolen, so the crime was clearly not a robbery. The attack was caught on video. But NY police have not made an arrest.

$30,000 was spent by Chicago police to investigate what they quickly saw to be a hoax. New York City quickly forgot the attack on the Jewish man – because the media wasn’t pushing for action. Crimes against Jews are apparently not newsworthy in New York City.

According to the Daily Wire, “This isn’t the only story of anti-Semitism in New York. Not by a long shot. Two weeks before that beating, a Jewish man, 19, was ‘violently assaulted’ as he walked past a local laundromat by a group of teenage black males. In December, a 16-year-old Jewish teen spent a week in a hospital after being beaten by two other teens; witnesses said that the teens screamed ‘Kill the Jew.’ The NYPD categorized the attack as “gang-related” rather than a hate crime, angering Jews in the area. This weekend, vandals shattered the window of a Chabad in Bushwick as the rabbi and his family slept inside.” Outside of the Jerusalem Post, the media was silent on these crimes.

Getting accurate statistics on hate crimes is difficult, partly because of police bias in the way they report. For instance, in large cities controlled by black and/or Democrat politicians, almost any crime against a black or a Muslim may be reported as a hate crime. A fistfight between a black man and a white man that had nothing to do with race may be classified as a hate crime due to “perceived bias.”

On the other hand, as reported in New York City, clearly anti-Jewish crimes are reported as gang violence or muggings. If a gang of young black men commits the crime, they will often not be charged with a hate crime because of the heavier penalties. Likewise, hate crimes by Muslims against Jews or Christians are deliberately under-reported because Jews and Christians are not “approved victims” by the politicians and the media.

In general, I believe “hate crime” legislation is flawed. In most cases, it requires police and prosecutors to read the minds of the alleged perpetrators. They decide whether there was a racial motivation – and their decisions are often motivated by their own prejudices. A case in point is the prosecutor in the Jussie Smollett case, a black woman named Kim Foxx. The police and most of her office knew that the case was a ridiculous hoax dreamed up by a young man desperate to create publicity.

He claimed that at 2 AM he was walking in a dangerous area of Chicago in 26-degree weather. Amazingly, two black men (to whom he had paid $3,500) painted their faces white, called him by racial and homosexual names (how would they have known he was homosexual in the dark?) and loosely wrapped a rope around his neck. Most amazing is that these black men were wearing MAGA hats in possibly the most dangerous city in the world for such headwear, and yelling, “This is MAGA country!” (which Chicago is most certainly not).

Some police detectives have stated they knew almost immediately that this was a hoax. But he was a rich movie star, he was black, and he was homosexual – all politically expedient reasons to thoroughly investigate the hoax. Their conclusion was that he should be charged with disturbing the peace and lying to police. The prosecutor decided on her own to drop all charges against Smollett. As a result, her two top aides resigned in protest, and both the extremely Liberal Mayor and the Police Superintendent of Chicago publicly criticized her. Now she may lose not just her job, but her license to practice law. And the city has billed Smollett tens of thousands of dollars for the police time spent investigating his lies.

What if a similar incident played out in Chicago, but the players were different? What if a poor Jewish man was beaten half to death by a gang of Muslim or black youth or by MS13 illegals? Would the police have bothered to locate the thugs? If found, would they have been charged? And if they were, would it have been with assault, or with a hate crime. Muslims and illegals are approved – not just as victims but also as perpetrators. Jewish people are not approved – so little or nothing would have been done – and the media would have ignored the incident completely.

What can we do? Start with electing honest politicians. Insist that hate crime laws be applied evenly and fairly. And stand up for the true minorities in this country – religious Jews.

Jews Are Still the Biggest Target of Religious Hate Crimes