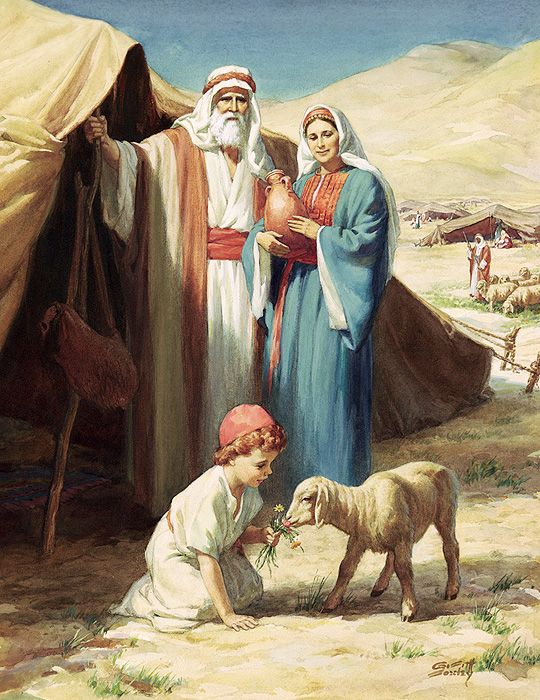 In 2014, as my wife Ana and I watched the videos of Palestinians firing thousands of rockets into Israel, she made one of her insightful comments. “I’ll bet the Israeli Jews are cursing Abraham and Sarah right now.” To understand why that is probably true, you need to hear a story.

We usually hear only good things quoted about Abraham from the Bible:

“Against all hope, Abraham in hope believed and so became the father of many nations, just as it has been said to him, ‘So shall your offspring be.’” (Romans 4:18)

Abraham sounds like a great man – and he was. He believed God for the miracle that had been promised to him – that his children and his children’s children would be uncountable. Even though all the evidence, everything in the natural, said that his faith was futile, he believed.

And God answered him because of his faith.“He did not waver through unbelief regarding the promise of God, but was strengthened in his faith and gave glory to God.” (Romans 18:20)

That was not smart. Sarah came to Abraham with a really dumb idea. Abraham was 86, and she told him that his only chance to bear a son would be to sleep with her servant, Hagar. Neither of them was willing to wait for God to fulfill his promise. Because of their impatience, Ishmael was born.

This was the Ishmael who would father the Arab nations that would devote all their energy to the destruction of Israel. Worse, Ishmael is the father of Islam. This is borne out by both the Bible and the Koran. The Koran says he was a prophet of Islam. He is also Muhammad’s ancestor.

Although Abraham loved Ishmael, he was born in sin. When Isaac was born, he became Abraham’s heir because he was lawfully born of his father and mother. Ishmael, who was born of a sinful union, hated Isaac and was jealous of him because he was their father’s rightful heir.

It is worth noting that even though Ishmael was born due to his father’s sin, Abraham prayed that God would bless him. As a result of that prayer, in Genesis 17:20 God told Abraham, “As for Ishmael, I have heard you; behold, I will bless him, and will make him fruitful and will multiply him exceedingly. He shall become the father of twelve princes, and I will make him a great nation.”

Through sin, that nation became the Islamic caliphate. The twelve princes were the twelve oil-rich Arab nations of the Middle East. If Ishmael and his descendants had chosen to follow God, who had given them such blessings, they would have prospered and been blessed. Instead, they made a conscious choice to follow a false God, the demonic Allah. And even though they have great riches, they are hateful, benighted, and blinded people.

By contrast, Israel has little oil and very few natural resources. But because they had God’s blessings upon them, they created what the world knows as the “Miracle in the Desert.” By hard work and ingenuity, they irrigated the desert land and made it among the bountiful on earth.

Israelis and all Jews are known worldwide for their intelligence and inventions. As a result, Israel is one of the most technologically advanced nations in the world. 22% of all Nobel Peace Prizes ever awarded have been given to Jews.

Back to our story: At Sarah’s insistence Abraham banished Hagar and Ishmael to the valley of Bakka. Their new home later became the city of Mecca, which of course is the seat of Islam.

Genesis 16:12 describes what the Angel of the Lord told Hagar: “This son of yours will be a wild man, as untamed as a wild donkey! He will raise his fist against everyone, and everyone will be against him. Yes, he will live in open hostility against all his relatives.”

You can see this today in the hatred between the various sects of Islam. Thus began the enmity between the Jews (and eventually Christians) and the Arabs (and eventually Muslims). Enmity is a strong word. It does not just mean opposition or dislike. It includes hostility, animosity, antagonism, antipathy, acrimony, bitterness, rancor, resentment, aversion, and hatred.

This division not just a family feud between two Semitic peoples. It is a powerful enmity that has existed for thousands of years, and which gets stronger by the day. I am frustrated when I see foolish but well-meaning people trying to force Israel to negotiate with terrorists.

I’m not just talking about the Hamas terrorists who run the Palestinian Authority. I'm talking about the majority of Arab nations and all Muslim-run countries - descendants of Ishmael - that hate Israel so much that they will not stop until every Jew is dead. You cannot negotiate with someone whose only irrational goal is to see you dead.

The only thing these thugs, these children of Ishmael, understand is strength. Strength is something Israel has today, and it is not afraid to display it. One of the first things Hitler did when he decided to exterminate every Jew was to disarm them. Then he took away their businesses and professions so that they had no money to buy weapons to defend themselves. Finally, he was able to slaughter 6 Million defenseless Jews.

Since then, generations of Israeli Jews have vowed, "Never again." And now they are strong enough, both militarily and financially, to back that up.The Jewish nation was born the same year I was born. I'm sure that is part of the reason why I feel a special connection to Israel. But the most important connection with Israel, one that is felt by Christians everywhere, is biblical.

In Genesis 12:3 God declares to Israel, “I will bless them that bless you, and curse them that curse you.”How can we as a nation bless Israel? We made a good start in November 2016 when we overwhelming elected Donald Trump - an avowed friend of Israel - to the presidency. He is doing a great job of eradicating the anti-Israel policies put forth by our most reason ex-president, who talked out of both sides of his mouth. When Obama spoke to Jewish or Christian groups, he talked about what a great friend he was to Israel. Yet his actions were in direct opposition to the safety and survival of Israel.

We can also elect Christians and conservatives who understand that Israel is our only friend in the Middle East and that if we want God to continue to bless America, we need to support Israel. Even though Arabs and Muslims have gone to war against Israel many times; even though Israel is hugely outnumbered; and even though every nation around it has pledged at one time or another to "drive them into the sea," Israel has never asked the U.S. to send troops to assist them. All they have ever asked is that we use the moral leadership of the US to protect them from the lies of the Arab League and the United Nations.

Under Obama, we didn't even do something as simple as that. Under Trump, the United States is once again a friend to Israel. Israel could well be the hammer that crushes Iran's nuclear capability before it can finish developing that capability that they can in turn use to attack us. Yet Obama told Israel not to act and threatened her if she continued down that path.

Trump hasn't spoken out on this publicly, but you can be sure the Israelis have had quiet talks about this with the U.S. And I feel quite certain that when Israel lets us know they are going after Iran's nuclear plants, they will do so with American "bunker-buster" bombs and Trump's blessings. Conventional bunker-busters are the only kind of non-nuclear bombs that can penetrate deep into the earth and destroy the underground reinforced bunkers where Iran builds and hides its nukes. They are also known as EPW's: Earth Penetrating Weapons.

Obama refused to sell them to Israel. Trump should give or sell them to the Israeli's immediately. First, because if Israel is willing to do the hard work of denying Iran nuclear weapons for us, we should be grateful and provide them all the help we can. Second, they are a far better alternative to Israel's other choice - their stockpile of nuclear bombs.

Hamas, which has been designated by the U.S. and almost every other civilized nation as a terrorist organization, hurls missiles into Israel on a regular basis. Since Israel withdrew from the Gaza Strip in 2005, terrorists have fired more than 11,000 rockets into Israel. Over 5 million Israelis are currently living under threat of rocket attacks. More than half a million Israelis have less than 60 seconds to find shelter after a rocket is launched from Gaza into Israel.

The policy of the United States has been to never negotiate with terrorists. Yet Obama's cowardly Secretary of State, John Kerry threatened Israel with the withdrawal of U.S. support for Israel if they don’t negotiate with Hamas. If Mexico were lobbing rockets into Texas or Arizona, we would immediately send F-16s to bomb the source of the missiles into oblivion. And I doubt very seriously that we would do as Israel has done by warning near-by citizens to evacuate the area.

So where do we as a nation get off telling Israel to “show restraint” and not respond when their homeland is bombarded on a daily basis? Under Obama the U.S. acted like the biggest hypocrite in history. We need to start acting like the great world power we were before 2008.