Most Americans believe that Firefighters support Joe Biden (and therefore the Democrat/Socialist agenda) over President Trump and Capitalism. They believe this for two reasons. First, the Union bosses (NOT the membership) gave Joe Biden the endorsement of the International Association of Firefighters (IAFF). Second, the Liberal "news" media has trumpeted the endorsment loudly and widely. But they didn't do what I did - they didn't ask the members who pay the dues that support the fat cat bosses and their luxury lifestyles what they thought.

I was a firefighter-paramedic when I was younger, and have maintained relationships within that community. And I still live in the County where I served. Also, firefighters are a friendly bunch. In most areas you can walk into a local fire staition and talk to the firefighters. I asked hundreds of them, by phone and in person, whether they supported the decision of the union leadership. Very few did, although some were Democrats who liked Biden. They thought that it was wrong to endorse one Party over another, because it has caused division among the members.

The Union's president felt the same way in the 2016 election. President Harold Schaitberger worried that a Clinton endorsement could deeply divide the firefighters, according to a union official who did not want to be identified because he was not authorized to speak about the endorsement decision. He acknowledged that the majority of members are Republicans, but the union management always endorses Democrats for president because of their stances on labor and other issues of importance to firefighters.

Schaitberger himself said at the time, "As a board we have discussed that deep and emotional divide in strongly held positions throughout our ranks. So we decided that endorsing a candidate for president in these circumstances would be devastating to so much of what we built and counter-productive to our members interests." 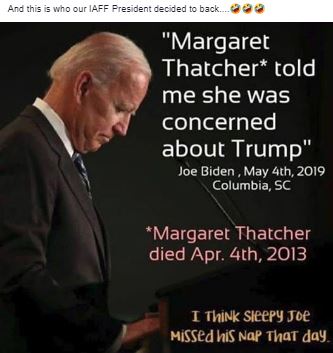 Surprise, surprise. Harold Schaitberger is still the president, and he and his fellow dictatorial board just endorsed Joe Biden. Why was he concerned about dividing the membership in 2016, but is OK with causing a much greater rift among members today? And he may have caused all that rancor for nothing, since Biden may not even get the nomination. If he keeps on having conversations with Margaret Thatcher, Democrats may decide they need a nominee who is more mentally stable.

Thousands of union firefighters are more than upset. Two weeks ago, on April 29, hundreds of them set up a Facebook public group called IAFF Union Firefighters for Trump. In less than a week, more than 18,900 people had joined showing support for Trump. As of today the membership has grown to almost 30,000. The founders of the group expressed frustration with the union boss' endorsement of Biden.

“Our movement evolved from dedicated IAFF members, frustrated with our leadership's exploitation of our political capital to promote a political candidate/party whose values run contrary to those of our own,” says the group description.

Biden loyalists set up their own Facebook page called IAFF Fire Fighters For Biden. As of this time is only being followed by about 800 people.

Here are just a few of the thousands of comments by firefighters on this divisive subject:

Mike R.: "Over Charging Union Dues Alert". How about Union leadership opening up books to the members so we can see how they can afford to give millions of dollars (of OUR money) to Biden?

Anthony Vera, a firefighter from Hollywood, Florida, said he is an American first, firefighter second, and a union member third. He said that a strong economy is one of the reasons he joined this movement: “I submit to you all that there’s no better issue for a firefighter than a strong economy and higher wages. They each bring more (not higher) tax revenue (which last time I checked, the majority of us depend on). More money in the economy means more security for our profession and stability for the municipalities that employ us. And that translates to more municipalities that are able to spend more on ‘our needs.'”

Edward Hannon, a firefighter from the Arlington County Fire Department and a member of the Facebook group, said he is an Independent voter but couldn’t agree with the union’s endorsement. “OK, stepping out of my comfort zone here to reply to this post. I am an Independent voter. Yes it troubles me that our union was sooo quick to endorse Mr. Biden."

David L Clark: "I'm here to back my Brothers even though im retired now. Love what Trump has done for the country. I back him and my brothers 100%."

Beth Vezzosi: "The endorsement was a mistake. It makes it seem that all US IAFF firefighters back Biden...The IAFF has an opportunity to financially support Biden without the ‘whatever it takes’ (to get Biden elected) fanfare. The public endorsement carries weight, and they know it. They should update their statement to reflect the fact that many IAFF members are NOT for Biden."

You may wonder, since all unions tend to be Liberal and support Liberal/Democrat/Socialist candidates, why Conservatives firefighters would join the IAFF. It's because in most cases they can't get a job unless they join. This issue is one of the best arguments for state right to work" laws, which mandate that Unions can't force, harrass or intimidate men and women to join them and pay huge dues for things they don't believe in. Currently workers in 23 states do not have this protection. Predictably, these are the Liberal "Left Coast" and the Northeast Liberal states.

Let's pray that when Biden drops out, as I think he may well do, the IAFF president will respect the members'views and refuses to endorse any candidate, as he did in 2016. Better yet, pray that he realizes how much he is dividing his members with his arrogance, and that he withdraws his endorsement of Biden.

Dan Bongino: NONE of the Firefights I Know Support Biden for President