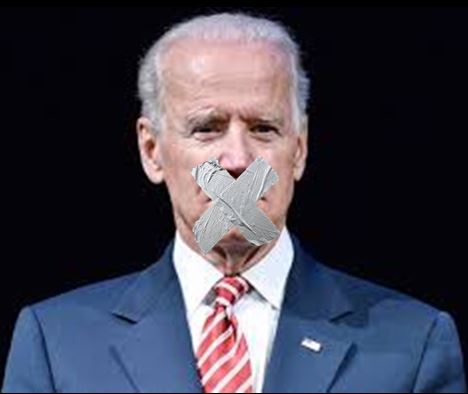 President Trump is not the only one who can pass out nicknames. Joe Biden’s new (and well-deserved) monicker shall be from this day forward “Hiden’ Biden.”

Why is Crazy Joe Biden hiding? Why didn’t he appear onstage with the other Dem candidates at the California Democrat Convention last week? Why is he afraid to do town halls or talk to the press? Why are his only public events carefully controlled to keep both the press and the public from asking him questions?

Actually, he has several very good reasons to be in the witness protection program…

First, he is the clear front runner in a huge pack of 24 Democrat candidates. At the moment the nomination is his to lose. He really can’t open his mouth unless his words are scripted, or he takes a very real risk of saying something stupid that would lose him the possible nomination. Why take the risk, when doing nothing is safer?
Second, he is well-known as a “gaffe machine.” He has made dozens, possibly hundreds (who can count them all?) of very dumb statements that have caused even his own party to ridicule him. These range from insisting that a man in a wheelchair stand up (this wasn’t at a healing service) to recently mentioning that Prime Minister Margaret Thatcher just told him that she was worried about Trump becoming president. Of course, Thatcher died years ago, so we must assume that he meant Theresa May, who just lost her job as Prime Minister.

Third, he can’t control his mouth. Ten days ago he made an off-the-cuff remark that he supported the Hyde Amendment, which makes it illegal for the federal government to fund abortions. Without having this amendment virtually no spending bill involving abortions could ever pass because Republicans wouldn’t vote for it. This has been true for more than four for decades, so Biden (and most other Dems) have voted for it many times. There was absolutely no reason to mention it, but he did. This created a firestorm of criticism that he couldn’t withstand. Within three days he reversed his position. This is why his staff doesn’t allow him to be within 100 feet of any microphone unless he is carefully scripted and controlled.

Fourth, interacting with the other candidates, as he would have had to do at the California Democrat Convention would put him on the same level as them. The same is true of the Iowa Democrat Convention, which he also recently skipped. At least four of the Dems running for the White House haven’t even gotten the requisite 1% in the polls that would allow them to participate in the first debate. As long as he is able to maintain his front-runner status, why should be bring himself down to their level?

Finally, he is making plenty of mistakes even while hiding. Twice in the last two weeks, he scoffed at the idea of China rising in economic power to challenge the United States. “China is going to eat our lunch? Come on, man . . . They’re not bad folks, folks . . . they’re not competition for us.” And: “No other nation can catch us, including China. I got criticized for saying that.” This, even though world-renowned economists are warning that China could pass the U.S. and become the world’s leading economic power within a decade.

Now he’s saying,it’s time for us “to get tough with China.” “China poses a serious challenge to us, and in some areas are a real threat.”He acts as if that’s now exactly what the President has been doing since he took office.
The irony is that his latest position (following the flip-flop) is the exact opposite of what he has stood for his entire career – especially as Vice-President. Obama and Biden allowed China to steal our trade secrets; cheat us by devaluing its currency; increase the U.S. trade deficit with China; and – most important – challenge us on the world stage in an attempt to take our place as the world’s leading economic power.

Biden says China is “not competition” for the U.S. But look at the facts. During the Obama-Biden reign of mediocrity, China surpassed Japan to become the world’s second-largest economy and overtook the US in manufacturing, exports, and power generation. In other words, China is already Number One in these three key areas. In 2013, according to Bloomberg, China surpassed the U.S. in purchasing power parity.

In a December 2018 article, Bloomberg declared, “Get Used to It, America: We’re No Longer No. 1.” So it might not take a decade for China to eat our lunch. China has already passed the U.S. in several important measures of economic superiority. That’s why we don't need a president like Hidin’ Biden - who doesn’t believe China is a threat.

With a president like that, we could be Number Two within a few months of his inauguration.