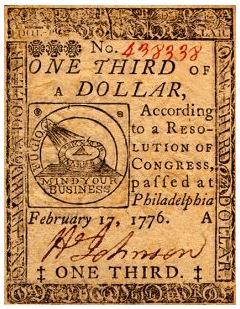 On June 22, in 1775, The Continental Congress issued its first paper money, The Continental Dollar. It was backed by nothing except a promise – a promise that the new government could not keep. And so, like all “fiat” currency, it failed.

A “fiat” is a government decree. So when a government decrees that a piece of paper is money, it is called “fiat money.” (Now, when people use that phrase you won’t have to nod your head and pretend that you understand what they’re talking about!)

In the spring of 1775, we were not yet a nation. We were still under British rule, but the 13 original colonies had formed a “Continental Congress” and sent representatives to attend its meetings.

The leaders of the Congress were concerned by British aggression against Colonialists who dared to express frustration with the heavy-handed policies of King George III. On March 5, 1770 a skirmish between British troops and a crowd in Boston, Massachusetts, became known as the Boston Massacre. Although the British were outnumbered, they were not in danger – but they had rifles. Although there was confusion about whether they had been ordered to fire on the crowd, or whether they had panicked, the result Was three dead Americans. The event was widely publicized and contributed to widespread mistrust and even hatred of the British troops.

This and other hostile acts, King George’s edicts that restrained trade, along with the declaration of martial law by the British, convinced the leaders of the Continental Congress to take action. They realized that they needed troops to defend themselves – and, as some argued for – to revolt against the Crown. There was just one small problem – they had no money. So they issued $2 million in bills of credit. These were backed only by the promise of future tax revenues.

The problem was that these bills were illegal under British law. The Massachusetts Bay colony had issued its own bills in 1690, but these were largely ignored by the British since they were not widely used. But the issuance of $2 Million in paper notes could not be ignored. (Over time, especially during the War, Congress issued another $124 Million of these worthless notes.) It seemed obvious to the British that the Colonies were preparing for war – even though many of the Colonists were not in favor of war, but simply wanted to protect themselves.

In any case - as even public school students who today receive practically no factual training in U.S. history know – there was a war. It is popularly known today as the American Revolution, but in fact it was our first civil war. All the Colonists were British citizens and subject to British law until they “severed the bonds” that bound them to the King. So when the tiny group of colonies issued the Declaration of Independence to King George III, they were actually engaging in treason. The signers risked hanging by putting their hands to the Declaration.

These were dangerous times. Most Colonists simply wanted to live peaceful lives; they wanted nothing to do with a rebellion. Many were active supporters of the British called Tories. We have this image of a widespread desire for freedom form the British among the Colonists. But in fact, only a small number of Patriots ignited the spark that became the Revolutionary War. Chief among them were the Sons of Liberty. That spark became a flame, which became a wildfire in which more and more Colonists participated.

What caused our Founding Fathers to take such drastic – and dangerous – actions? Most Americans point to the Boston Tea Party and the anger against “Taxation Without Representation.” Some say it all started with the Boston Massacre. Others credit Thomas Paine’s “Common Sense” (a small booklet that laid out the case for rebellion) for finally convincing the people who would become Americans to take violent action.

But one of our most respected – and likely the most intelligent – of our Founders begged to differ. Benjamin Franklin said, "The inability of the Colonists to get power to issue their own money out of the hands of King George III and the international bankers was the prime reason for the Revolutionary War."

Mackenzie King, the former Prime Minister of Canada, stated that, "Once a nation parts with control of its currency & credit, it matters not who makes the nation's laws. Usury, once in control, will wreck any nation. Until the control of the issue of currency & credit is restored to government & recognized as its most sacred responsibility, all talk of the sovereignty of parliament & of democracy is idle & futile."

When he made this statement it was in protest against Canada’s Central Bank, the equivalent of our Federal Reserve System. He was complaining about a nation that had once been financially free being taken over by a cabal of private banks. At this point in our history, the soon-to-be United States had never known economic freedom. So Franklin was right. Our biggest problem – and the “prime reason for the Revolutionary War" – was that we were economic slaves to the British.

On a side note, it is ironic that we fought so hard and shed so much blood to break the chains of economic servitude in 1776, only to once again put ourselves into economic serfdom in 1913 when we allowed Congress to give away its Constitutional power – and duty – to issue and oversee our currency to a cabal of private banks called the Federal Reserve System.

Back to the Continental Dollar. We were not the first nation to issue worthless money and watched it hyper-inflate. In fact most nations have done so at some time. And the average life-span of a paper fiat currency has been only 37 years. The Continental Dollar lasted only four years. As George Washington noted at the time, “A wagonload of currency will hardly purchase a wagonload of provisions.”

This is why I find it amusing when I speak to audiences all over the world and tell them that America is heading towards hyper-inflation. Someone always says, “That’s impossible!” When I ask why, they will typically say, “It’s America – the greatest economic power ever.” I tell them that it’s not only possible – it has already happened. I say that we have the greatest debt of any nation that has ever existed. And that our current currency – the Federal Reserve Note – is nothing more than a repeat of the Continental Dollar. It, too, is backed by nothing.

The new nation entered a deep economic depression following the Treaty of Paris and the cessation of hostilities in 1783. Some economists estimate that the United States lost 46% of it GNP (Gross National Product) during this period. During the Great Depression it lost a similar amount – 48%.

So the unstable Continental currency and the huge war debt caused a depression that nobody talks about. There’s a lesson in here somewhere. How about “Worthless currency and national debts are bad”? It sounds right, but just try to sell it to our representatives in Congress. They prefer to bury their heads in the sand, and raise their own pay.

For twelve years after the Revolution we were governed by the Articles of Confederation. The articles were poorly designed. I don’t fault those who wrote them because they were pretty busy at the time trying not to be killed by British soldiers. But by this time it was pretty obvious to everyone that they needed to be altered.

Instead of revising the Articles, those who were given the task of providing our fledgling nation with a useable governing document decided to totally scrap the Articles of Confederation and write an entirely new Constitution. I could write for days about the struggles and the triumphs that resulted in our Constitution, but I want to point out the one provision that is germane to today’s topic.

The Constitution provided that only Congress had the power to “coin money.” Some foolish commentators have stated that the Framers of the Constitution didn’t know about paper money, so they only mentioned coinage (Gold and Silver). They knew all about it – they just didn’t trust it. They had just been through the debacle of the Continental Dollar, and they insisted that our nation have real money – money backed by Precious Metals.

What about the provision that only Congress could issue money. Nowhere in the Constitution is there a provision for Congress to sub-contract its most important power. Yet they have done so, and even worse, they have given that power to a group of private banks euphemistically titled the Federal Reserve System. These criminals issue U.S. money at no cost – and then loan it to our government with interest.

That’s right friends. If the U.S. were to miraculously pay off our $22 Trillion National Debt, we would immediately be in debt again the very next day. That’s because Congress has given the Federal Reserve the power and authority to issue the New Continental Dollars (known as Federal Reserve Notes). They produce them out of thin air, and then charge us interest when they transfer them to us.

In a message to Congress, Andrew Jackson (whose image, ironically, appears on our $20 Bill), proclaimed: "It is maintained by some that the Central Bank is a means of executing the constitutional power ‘to coin money and regulate the value thereof.’ Congress has established a mint to coin money and passed laws to regulate the value thereof. The money so coined, with its value so regulated…are the only currency known to the Constitution."

But our legislators, ignoring his message and the Constitution itself, continue to issue Monopoly money backed by nothing. If you think that’s immoral, disgusting and downright evil, watch my video below to see how the “Fed” performs its magic.

So there you have it. The criminal banking system of the United States that makes bankers and politicians rich while impoverishing “We, the People,” started at the very beginning of our nation – a year before the Revolutionary War began.

Sir Josiah Stamp, once the President of the Bank of England, said, "The modern banking system manufactures money out of nothing. The process is perhaps the most astounding piece of sleight of hand that was ever invented. Banking was conceived in iniquity and born in sin…If you want to continue to be the slaves of bankers and pay the cost of your own slavery, then let bankers continue to create money and control credit."

Our Presidents certainly knew what was going on. After vetoing a Central Bank bill, President Andrew Jackson said, "The Bank is trying to kill me - but I will kill it! If the American people only understood the rank injustice of our money and banking system - there would be a revolution before morning!"

Abraham Lincoln was equally irate at the evils of modern banking. "The government should create, issue and circulate all the currency and credit needed to satisfy the spending power of the government and the buying power of consumers. The privilege of creating and issuing money is not only the supreme prerogative of Government, but it is the Government's greatest creative opportunity. By the adoption of these principles…the taxpayers will be saved immense sums of interest. Money will cease to be the master and become the servant of humanity."

So why does the Federal Reserve System exist? Why has Congress never exercised its oversight power to audit the Fed? Because it refuses to be audited. Tell your representatives what you think about that. And vote for Senators and Congressman who will pledge to return our nation to sound, gold-backed money – before it’s too late.