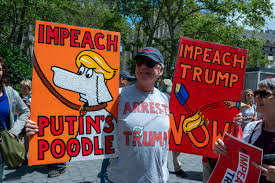 I believe the Democrats in Congress are the dumbest group of humans ever assembled in one place. They think that impeaching our President would guarantee Democrat control of the White House - and probably both Houses of Congress.

In fact, this is the first time I have agreed with Socialist Senator Bernie Sanders about anything: “If for the next year and a half, going right into the heart of the election, all that the Congress is talking about is impeaching Trump, and Trump, Trump, Trump and Mueller, Mueller, Mueller. What I worry about is that works to Trump’s advantage.”

Of course, that's not their only issue. They want to increase the number of babies aborted by passing laws that allow them to kill babies after they are born. The call it "post-birth" abortion."

They want to repeal the tax cuts that have revived our economy - and raise them even higher than the Obama levels. That's a surefire vote-getter for middle class Americans.

They want to turn us into a Socialist nation. Here's a tip: Take a vacation in Venezuela before you vote. Nearly 60 percent of 18 to 26 year-olds believe Socialism is the "most compassionate system"; proof that Democrat brainwashing in our schools is working.

They demand open borders. They don't care that drugs, sex-traffickers, guns, MS-13 gang members and other violent criminals cross those same borders. And now they want to dismantle ICE, whose only job is to capture the criminals who have already been ordered by the courts to be deported.

Now that we are finally energy independent for the first time in decades, they want to destroy the energy industry. If they win, expect to see windmills everywhere; gasoline selling for $10 a gallon; and a doubling of your electricity bill as they destroy the coal producers.

Of course, all their wonderful plans will take us from the lowest unemployment rates in decades, and back to Obama's 10% unemployment. But that's a small price to pay to save the purple-eyed horned toad (or whatever their favorite creature of the month may be).

But most of their effort will focus on the Impeachments of President Donald Trump. And it will be their undoing.

I hope Nancy Pelosi will impeach our President. No, I beg her; I implore her to do so. Far from hurting him in any way, it will guarantee his re-election. The hordes of Democrats running for their nomination will magically disappear. No one will want to the Democrat candidate that loses 48 states to Trump.

Here's how it would go. Most of the House Dems would vote to impeach. Contrary to what most Americans (and all Democrats) think, impeachment means nothing. It is like being charged by a prosecutor for a crime he knows you didn't commit, and knows he has no possibility of winning - just to make a political statement. Far from staining his reputation, he would bear impeachment by this pack of loons as a badge of honor.

Then it would go to the Senate for the trial. No Republican will vote to impeach, so that's that. But wait. I believe the President's lawyers will ask the Senate to delay the vote so that he can subpoena witnesses for his trial. That's where the fun will begin.

For almost three years, after interviewing hundreds of witnesses and spending $40 Million, after the President handed over 1.4 Million documents, Mueller and his merry band of Democrat Trump-hating lawyers haven't been able to lay a glove on the President. Now it's his turn.

He will be able to compel public testimony from all those who started the false Russia-Trump narrative; those who presented false documents to the secret FISA courts; Hillary to testify about all of her obstructions of justice, including destroying 33,000 emails that were under subpoena; and Obama to find out why the intelligence services he controled (including the CIA and the FBI) actively worked for the Democrat party to help Hillary win and defeat Trump. And that's just the appetizers.

The main course will be the millions of documents, emails, and memos the Democrats will be forced to turn over. They will show that Obama and Hillary gave stand-down orders to our military assets who were poised to rescue our American heroes at Benghazi. They will show how Obama's foolish policies resulted in the creation of ISIS, resulting in an Islamic Caliphate that covered much of several Middle East nations. You get the idea. All the stuff that the Democrats have colluded to keep secret from the American people will finally see the light of day.

The impeachment of President Trump would result in a triumph of transparency that will do more to clean up the Swamp of Washington, D.C. than everything Trump has done so far.

So, Nancy, I double-dog dare you to start impeachment proceedings immediately. It will make my day, and the days of tens of millions of patriotic Americans that are sick of the Democrat-Socialist lies that you spew every day.