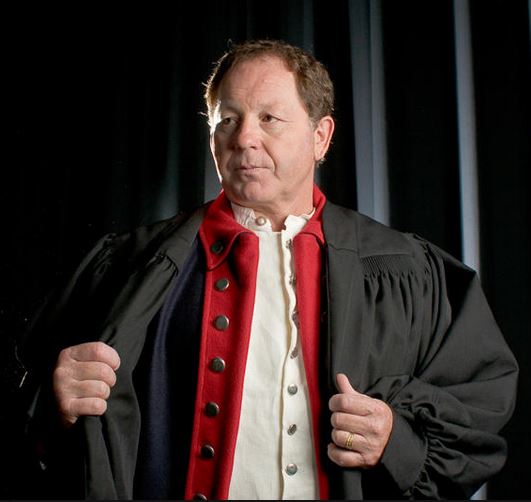 Several years ago I wrote an article called "The Forgotten Holiday" and another called "The Black-Robed Regiment," which described the key role that Colonial churches and ministers played in the American Revolution. My research led me to make this bold statement: "I do not consider it a stretch at all to say that were it not for the pastors and churches of colonial America, our land would be a British colony today."

Those articles came to the attention of Wendy Griffith, a producer for the Christian Broadcasting Network (CBN). CBN was planning a series on the Christian foundations of America, and one of her researchers brought them to her attention. This led to an invitation to me to be interviewed for the series.

The series in which my interview appeared have been aired several times, usually around Independence Day, on The 700 Club on Monday. If you can find them archived, make sure your children watch them. They need to know the truth about the foundations of this great nation to counteract the lies they hear every day in school.

My interview was taped at a South Florida TV station near me, and in the interviewer was in a studio in Virginia. Through the magic of television production, it seemed like we were in the same studio. Altogether they taped me for about 35 minutes. But they also interviewed other historians and professors, so, as is normal, only about 6 minutes of my taping made it into the final production. I thought you might like to see all of the questions they asked and my answers...


Q. What role did the churches and Christians play in defending and founding what was to become the United States of America?

A. First, the pastors preached against the tyranny and injustice of the British. They laid the moral foundation, based on the Word of God, for rebellion against ungodly authority. Second, the pastors, elders and deacons of the protestant churches organized church members as "Minutemen". The Minutemen were farmers and workmen who were ready at a minute's notice, when they heard the church bells toll, to lay down their tools and take up their muskets.


Q. What was the Black Robed Regiment? Why did the English, and those loyal to England, fear them and their supporters?

A. The Black Robed Regiment was not a military unit at all, but it had more effect on the revolutionary war than any actual regiment. It was a disparaging name first given by a Tory (British loyalist) named Peter Oliver to the ministers who were the moral force behind the Revolution. They were called the Black Robed Regiment because of the black robes all pastors of that time wore when they preached. Oliver complained that the preachers were always at the heart of revolutionary disturbances. This term was later used by the king of England to refer to these ministers who led their congregations against the redcoats. The king feared the ministers because they refused to acknowledge the divine authority of the king. Their cry was, "No king but King Jesus!!" Many of them wrote passionate pleas for freedom, which spread throughout the colonies.


Q. Why was Reverend Jonas Clarke significant to the Battle at Lexington?

A. Lexington, Massachusetts, was where what Ralph Waldo Emerson described as "The shot heard 'round the world" was fired. John Hancock and Samuel Adams were staying at the home of Reverend Clarke just before the British first attacked our forefathers. Most Americans don't know this, but three days before his famous ride of April 18, 1775, Paul Revere made another ride to Lexington. This was to warn Hancock and Adams that the British were coming to capture and execute them. Rev. Clarke was the founder, organizer, and the Captain of the company of brave men who had the honor of being the first to defend their fledgling nation in front of his church in Lexington, Massachusetts. He swore he would never run from the British guns. "Old Jonas", as his parishioners called him, was felled by a musket ball, but continued to shoot at the British from the ground until he was run through by a British soldier's bayonet.


Q. The monument that honors the Minutemen who died on the Lexington Green that day says, "The blood of these martyrs was the cement of the Union of these states, then colonies, and the peace, liberty and independence of the United States of America was their glorious reward." These Minutemen really were martyrs for the cause of freedom and were obviously willing to give their lives. What should people know about these men?

A. Almost all of the Minutemen were Christians. They believed that all authority is subject to the authority of God and the Bible. They knew that they were doing the will of God by fighting oppression. They realized that the British had abused their authority and virtually enslaved the colonists. And they knew that if they did not fight their oppressors, no one else would.


Q. Sometimes, the ministers themselves left their pulpits to join in the fighting. There's quite a dramatic story about Pastor John Muhlenberg joining the Continental Army. Tell me about that.

A. I love this story. General George Washington asked John Muhlenberg, a Lutheran pastor, to raise a regiment of volunteers to fight the redcoats. Muhlenberg did so, but before he led them into battle he preached a powerful sermon from Ecclesiastes 3:1-8 that ended with these words: "The Bible tells us there is a time for all things and there is a time to preach and a time to pray. The time for me to preach has passed away, and there is a time to fight. Now is the time to fight!" With that, he took off his robe to reveal the uniform of a Virginia colonel. He took his musket from behind the pulpit, put on his colonel's hat, and marched off to lead his men to war.


Q. You wrote that you did not consider it a stretch at all to say that if it were not for the pastors and clergy of Colonial America - this land would be a British colony today?

A. Wayne Sedlack, an expert on the Christian heritage of our nation, once wrote: "Without the outspoken, tenacious and courageous leadership exhibited by the pastors of the 'Black Regiment', it is doubtful whether American independence could ever have been achieved." My research confirmed this, which is why I wrote the article that brought me to your network's attention. Most of the colonists were angry at the brutality of the British, which included burning the town of Falmouth, Maine; starving Boston by closing its port; and leaving an executed man's body on public display for years as a warning to revolutionists. (All of this occurred before the American Revolution began.) The colonists were angry, but they were unorganized, unfocused and undisciplined. The pastors and church leaders organized them into a fighting force that defeated a well-trained, seasoned army 10 times its size. According to historian J.R. Sizzo, at the time of the ultimate surrender of the British at Yorktown, all of the colonels of the colonial army except one were church elders. More than half of all the soldiers and officers of the American army were Presbyterians, and most of the rest were members of other Christian denominations.


Q. Why is the role of the churches and Christians in our nation's beginning downplayed so much today?

A. It's not just in this area that America-haters are rewriting history. Middle school children are being taught in our public schools that America was the aggressor in World War II. Pearl Harbor, the reason why we were forced to go to war, is not even mentioned in many of their textbooks. As I said in the article "The Forgotten Holiday" on www.ConservativeTruth.org, there are powerful people in this nation trying to rewrite the history of our nation's founding. If we allow these historical revisionists to succeed, it won't be long before we start "learning" that Muslims founded our nation. We will be surprised to "discover" that the pilgrims actually came here to gain freedom to practice homosexuality. And the truth about how Christians came to this land to form a Christian nation will be written out of our history.


Q. What would you like Americans to know about the role Christians played in the birthing of our nation?

A. The truth is that there was no freedom of religion in England. King George III of England tried to force preachers to be licensed by the crown. There was a State church which many wanted no part of. So thousands came to America with the specific purpose of founding a Christian nation. The people who founded this nation left their homes to gain freedom to worship according to the dictates of their consciences. They were not about to allow their freedom to be taken from them again. Those same preachers who refused to be licensed by England led the fight to throw off the chains of oppression. If it were not for those ministers and their congregations, there would be no United States of America today.


NOTE: If you'd like to see the video as it was produced, please clock below, or go to the link at http://www.conservativetruth.org/article.php?id=6215