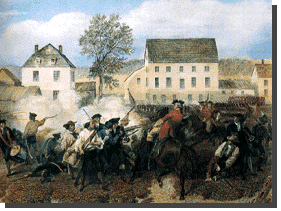 On April 19, 1775, an event took place that marked the beginning of the American Revolution. It has come to be known as “The Shot Heard ‘Round the World.” Yet no holiday commemorates this momentous moment in our nation’s history. I think I know why.

Paul Revere made his famous midnight ride on the night of April 18, 1775, warning all in his path, “The redcoats are coming!”

The “redcoats”, British regular soldiers, were coming to the tiny village of Lexington, Massachusetts, because they hoped to find and capture or kill two of America’s greatest patriots, Samuel Adams and John Hancock. Adams and Hancock were staying at the home of Rev. Jonas Clark, pastor of the town’s church.

This was the first battle of the American Revolution. This was the first time shots were fired in the conflict that would determine whether America would be free or forever be enslaved to the British Empire. All this is well known to students of history. What is not known to most is the crucial role that churches and Christians played in defending and founding what was to become the United States of America.

Pastor Clark, like many other pastors of that time, was a member of the Black Regiment, so named because of the color of the robes the clergy wore. This was not an actual regiment of soldiers, but was instead a collection of ministers who believed that God was on the side of freedom. In 1760, royalist colonial Governor Pownall of Massachusetts warned that once the ministers of the colonies joined in the resistance against the power politics of Great Britain there would be no stopping the colonial movement. "The spirit of their religion...will, like Moses' serpent, devour every other passion and affection," he said. So influential were the pulpits that it was said by Prime Minister Horace Walpole in Parliament, "Cousin America has run off with a Presbyterian parson." (See LINK below, “The Black Regiment Led the Fight in Our War for Independence.”)

The American company was composed of farmers, merchants and ministers with an assortment of firearms. They were up against a well-trained force of British professional soldiers who outnumbered them ten to one. These brave men, along with the men from other churches in the British colonies, came to be known as the Minutemen, because when the church bells tolled “danger”, they arose to the occasion in a minute, dropping their shovels and picking up their muskets.

The battle took place in front of the church, where the Minutemen had drilled in preparation for this day. The Minutemen were told by their officers not to fire the first shot. A British officer called out, “Lay down your arms, you #@&# rebels!” But before the colonists could respond, the British fired the first shot, and the battle was on. When the smoke cleared, six Minutemen and one British soldier were dead.

The colonists had lost the Battle of Lexington, but the unprovoked attack served only to arouse the colonists to arm and defend themselves. Towns that had not yet organized a militia began to do so with haste. In most cases the organization was provided by churches and their pastors who were the natural leaders of the towns. And of course the Minutemen eventually won, driving their British oppressors into the sea.

Read this excerpt from the article, “Pastors, Join the Black Regiment” (see below):
“The Black Regiment was a group of clergy who were fierce opponents of British tyranny and a driving force in the decision of the colonies to seek independence. King George had provoked many of these men to leave England by demanding that they submit to licensing by the crown. He called them the Black Regiment because of the black robes they wore when preaching.

“These men of God staunchly opposed the divine right of kings. Their cry was, “Restore the crown rights of King Jesus!” Many of them wrote impassioned pleas for freedom, and some even joined the Continental Army. When George Washington asked Lutheran pastor John Muhlenberg to raise a regiment of volunteers, Muhlenberg gladly agreed. Before marching off to join Washington’s army, he delivered a powerful sermon from Ecclesiastes 3:1-8 that concluded with these words:

“Then Muhlenberg took off his clerical robe to reveal the uniform of a Virginia Colonel. Grabbing his musket from behind the pulpit, he donned his Colonel’s hat and marched off to war.”

Without the outspoken, tenacious and courageous leadership exhibited by the pastors of the Black Regiment, it is doubtful whether American independence could ever have been achieved.

So why do we celebrate stupid holidays like Halloween, and ignore one of the most important days in the history of America? I think I know why.

I do not consider it a stretch at all to say that were it not for the pastors and churches of colonial America, our land would be a British colony today. This country was founded by Christians who left Britain and Europe to gain freedom to worship according to the dictates of their consciences. They were not about to allow their freedom to be taken from them again.

But there are people in places of power in this country that don’t want the world to know the crucial role Christians, churches and pastors played in the birth of the nation. It was mostly Christians who died in the American Revolution. Most of the Minutemen were formed into companies based in churches. The Black Regiment, the pastors who fought alongside the men of their churches, was the driving forces behind the effort to prepare for the attacks by the British.

Just as our children are being taught revisionist history regarding World War II, the revisionists are hard at work to erase the role Christians have played in the forming of our nation. If you read the textbooks most children are given to study WWII, you will discover that the U.S. is portrayed as an aggressive nation that used two nuclear bombs on poor, defenseless Japanese citizens. Not one mention is made in these textbooks of Pearl Harbor, the sneak attack by the Japanese which killed thousands of U.S. servicemen and civilians, the attack which forced the U.S. to become involved in the war. Nor do they relate that the bombs stopped the war, saving millions of lives on both sides.

If we allow the historical revisionists to succeed, it won’t be long before we start “learning” that Muslims, Hindus and Buddhists (with perhaps a few African pagan religions thrown in) founded our nation. We will be surprised to “discover” that the Pilgrims actually came here to gain freedom to practice homosexuality. And the truth about how Christians came to this land to form a Christian nation will be entirely written out of our history.


PUBLISHER’S NOTES:
1) This article was first published on April 26, 2006, and is reproduced here exactly as written then. It seems appropriate, since we celebrate our Independence in July. But the first overt act of the Revolutionary War took place on April 19, 1775 - a fact that is remembered only by a few patriots and historians.
2) Our thanks to Rev. Earl Adams who sent us a reminder of the significance of April 19, 2006 which caused us to research and write this article.