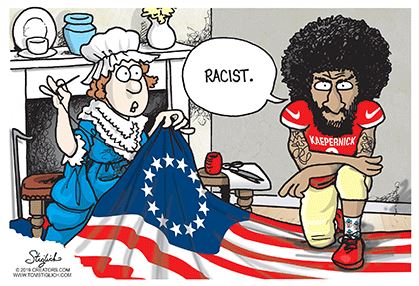 It is a shame that Liberals did everything they could to destroy the joy and pride of Patriots as we celebrated Independence Day.

First, an anti-American washed-up football player, who seems to have made it his second career to destroy patriotic expression, told NIKE that they couldn’t distribute a patriotic shoe on Independence day. To the horror of Colin Kaepernick the shoe displayed our first American flag, commonly known as “The Betsy Ross Flag,” and Kaepernick found it “offensive.” Note that no civil rights group or other organization opposed it (although I predict that they will all now jump on board the Colin “offense” train). It was just Kaepernick showing off his power as the new darling of the anti-American Left.

As a NIKE endorser, Kaepernick knew about the planned shoe well in advance. But he didn’t object until after NIKE had spent millions designing the shoe, having it manufactured in China, and then shipped to the U.S. in time for it to be first sold on Independence Day week. Then, two days before its release, to show his power and stroke his huge ego, he blackmailed NIKE into halting its distribution.

Of course, NIKE couldn’t admit that they had allowed a punk like Kaepernick to dictate company policy, so they lied. The first lie was that no one at this multi-million dollar company had realized that the shoe bore the design of “the old flag.” Really? Of all the dozens of executives who reviewed and approved the new design, not one noticed that the flag had thirteen rather than 50 stars? No, the design was deliberate. Since Independence Day celebrates – that's right, our Independence – they chose to use the first official U.S. flag to be used following our Independence.

Later, NIKE changed its tune. No longer did they claim they accidentally chose the “old flag” over the current flag. Now they claim that they didn’t want to “offend” Americans by displaying their flag. Translations: “We’re cowards, so we allowed one disgruntled America-hater to dictate our policy, and deny the millions of Americans the opportunity to show their patriotism by buying our over-priced, made-in-China Independence Day special shoe.”

In its third, most recent lie, NIKE blamed Social Media for halting the distribution of the shoe: https://www.businessinsider.com/nike-faces-social-media-backlash-pulling-us-flag-shoe-design-2019-7

What will happen to all those hundreds of thousands of shoes? Will they destroy them, since they’re so offensive? Probably, since they can’t release them after stating that they would offend some anti-American Americans.

Prediction One: On their way to be burned, a few cases of the shoes will “fall off the truck.” Eventually you will see the few surviving pairs being sold on eBay. The combination of their rarity and their provenance (the spectacle of Kaepernick’s hatred for America and NIKE’s cowardice) will result in them selling for thousands of dollars a pair.

Prediction Two: Since the shoes had already been shipped to outlets, NIKE has requested that they be returned. Some of the retailers will hold back some of the shoes and claim they were lost. After a decent interval, they will auction them anonymously (so as not to lose their license to sell NIKEs) and make millions.

Prediction Three: (This one is more of a hope than a prediction.) Another shoe company with guts will quickly put out a patriotic shoe with Old Glory on it. I don’t happen to need a new pair of shoes right now, but if an American company (one that makes it products in America) produces such a shoe, I pledge to buy the first three pairs for my family. (I hope you’re reading this, New Balance.)

NOTE: Days after writing this, but prior to its publication, eBay announded that so far the highest bid on a pair of these shoes that they had sent to a distributor prior to NIKE's cowardly cave-in to Kaepernick, was $15,000 per pair. Bonus prediction: They will go much higher.

In summary NIKE lost millions of dollars and the respect of millions of patriotic Americans. That’s fine with me. Our family has boycotted NIKE for years because most their shoes (as well as those of almost all of other athletic shoe makers) are made in Communist China – and none are made in America. We, along with many of our patriotic friends, buy our shoes from New Balance, which proudly makes its shoes in America – and contributes to American jobs and prosperity.

You can buy New Balance shoes online or at their many stores
https://www.newbalance.com

FALLOUT:
Millions of Americans are boycotting NIKE. The governor of Arizona has withdrawn financial support for a NIKE plant in his state that would have made NIKE clothing. Sales are plummeting. And the company is being trounced on Twitter and other social media.

@Andrew Long
As a loyal customer for over 30 years of @Nike I will no longer be part of the Nike family. I was looking forward to these shoes coming out, but because one man had a problem with a symbolic part of our American history you chose not to release them. #nikeboycott#NikeHatesAmerica

@PeppoGlen
My family has made a collective decision to not purchase Nike products any further. We will support American companies that are not driven by politically motivated initiatives. #nikeboycott

@michaeljohns
Years ago, when the @Kaepernick7#TakeAKnee campaign first drew @Nike's endorsement, I decided I would never again buy any of their products - and I haven't. Looking for an alternative for #sneakers? I highly recommend USA-made @newbalance
#NikeHatesAmerica#nikeboycott#MAGA