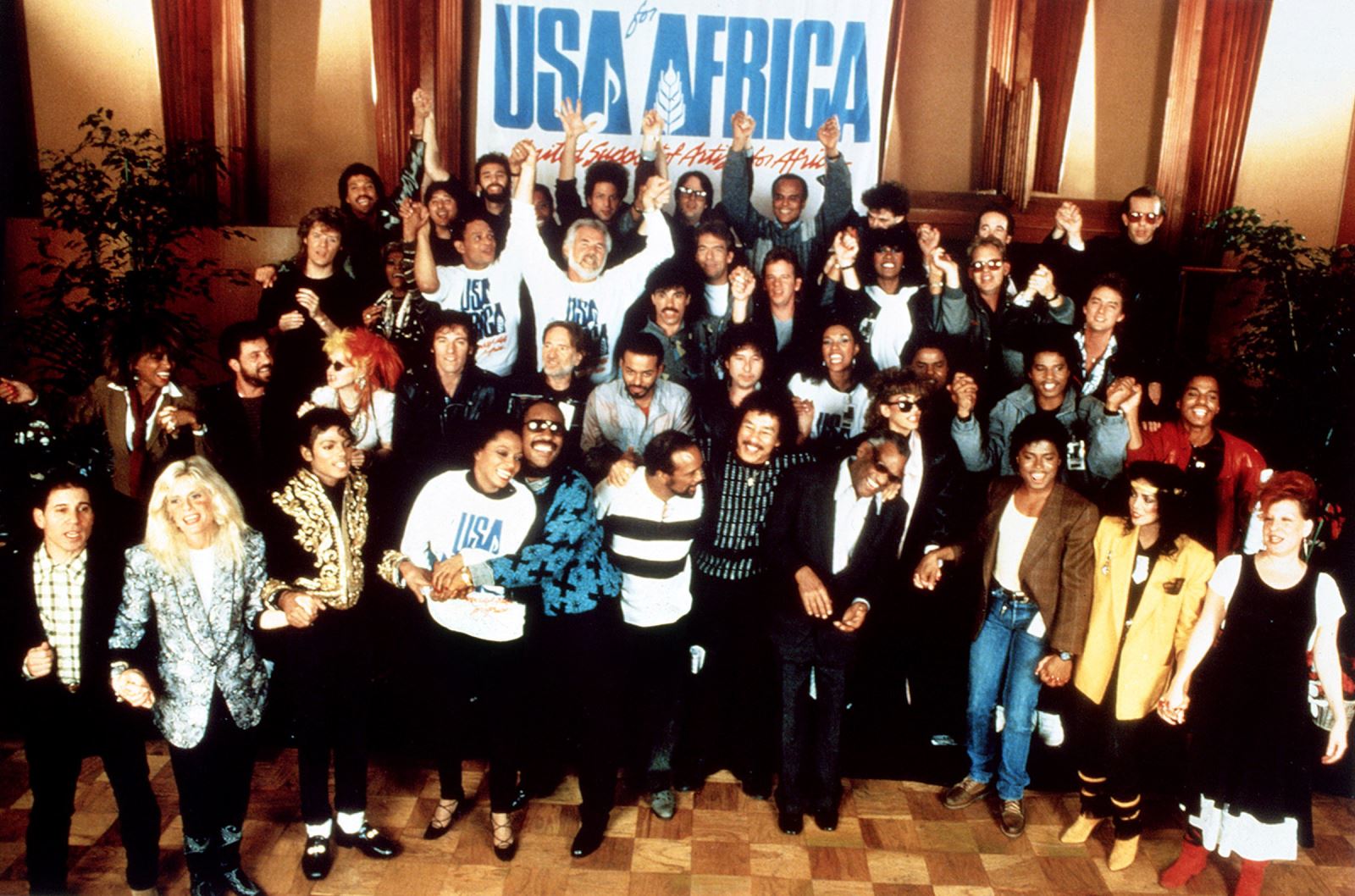 Live-Aid, Which Inspired “We Are the World” was First Performed 34 Years Ago Today

Everyone remembers the wonderful song, “We are the World,” the face of the USA for Africa project that sold 20 million singles. Along with the money raised from promotional items like T-shirts and posters, the project raised $63 Million for famine relief in Africa. In today’s dollars that would be $163 Million.

But few remember what inspired “We are the World.” Live-Aid was the brainchild of Bob Geldof, the singer of an Irish rock group called the Boomtown Rats. In 1984, Geldof traveled to Ethiopia after hearing news reports of a horrific famine that had killed hundreds of thousands of Ethiopians and threatened to kill millions more. After returning to London, he called Britain’s and Ireland’s top pop artists together to record a single to benefit Ethiopian famine relief. “Do They Know It’s Christmas?” was written by Geldof and Ultravox singer Midge Ure and performed by “Band Aid,” an ensemble that featured Culture Club, Duran Duran, Phil Collins, U2, Wham!, and others. It was the best-selling single in Britain to that date and raised more than $10 million.

On July 13, 1985, at Wembley Stadium in London, Prince Charles and Princess Diana officially open Live Aid, the FIRST WORLDWIDE ROCK COCERT. It continued at JFK Stadium in Philadelphia and at other arenas around the world. This 16-hour Super Concert was linked by satellite to more than a billion viewers in 110 nations. In 40 of those nations, fundraisers were held for famine relief. In a triumph of technology and caring hearts, the event raised more than $125 million in famine relief for Africa.

“Do They Know It’s Christmas?” was also a No. 1 hit in the United States that inspired Harry Belafonte to gather U.S. pop artists to come together and perform “We Are the World,” a song written by Michael Jackson and Lionel Richie. “USA for Africa,” as the U.S. ensemble was known, featured Jackson, Richie, Geldof, Harry Belafonte, Bob Dylan, Cyndi Lauper, Paul Simon, Bruce Springsteen, Tina Turner, Stevie Wonder, and many others. Phil Collins amazed everyone by performing in England, then flying by Concorde from London to Philadelphia to perform there. The single went to the top of the charts and continues to raise money for humanitarian relief even today.

This was the beginning point for the world's largest-ever Super Concert. And it was the inspiration for USA for America and the powerful song "We are the World."

"We Are the World" was conceived of by Harry Belafonte, who, along with fundraiser Ken Kragen, was instrumental in bringing the vision to reality.  The charity single record (remember records?) was originally recorded by some of the most famous musicians of its time, assembled by United Support of Artists (USA) for Africa in 1985. It was written by Michael Jackson and Lionel Richie and produced by Quincy Jones.

In order to get the most stars to participate, the taping started at 10PM, following a music awards ceremony attended by most of them. Since he would be dealing with some of the highest paid musicians in the United States, Jones sent all of them a message prior to the taping: “Leave your egos at the door.” The taping proceeded smoothly, with no one trying to hog the spotlight. It was finished by dawn the next day. With sales in excess of 20 million copies, it is one of fewer than 30 retail singles to have sold at least 10 million copies worldwide.

Following Band Aid's 1984 "Do They Know It's Christmas?" project in the United Kingdom, an idea for the creation of an American benefit single for African famine relief came from activist Harry Belafonte, who, along with fundraiser Ken Kragen, was instrumental in bringing the vision to reality. Several musicians were contacted by the pair, before Jackson and Richie were assigned the task of writing the song. The duo completed the writing of "We Are the World" seven weeks after the release of "Do They Know It's Christmas?", and one night before the song's first recording session, on January 21, 1985. The historic event brought together some of the most famous artists in the music industry at the time.

The song was a worldwide commercial success. It topped music charts throughout the world and became the fastest-selling American pop single in history. The first ever single to be certified multi-platinum, "We Are the World" received a Quadruple Platinum certification by the Recording Industry Association of America, and was awarded numerous honors—including three Grammy Awards, one American Music Award, and a People's Choice Award.

But most important, like Live Aid, it raised millions of dollars that saved millions of lives. For all the criticism the entertainment elite (and particularly Michael Jackson) for the selfish and self-centered lives many of them lead, the music industry really came through in 1985. Though all who participated were famous and hit the tops of the charts, I will remember them for the good they did by coming together without pay to produce memorable music that relieved human suffering in Africa.

Now sit back, click below to LISTEN TO THE music, and Like it so that those who were involved will know that we still love and appreciate them.