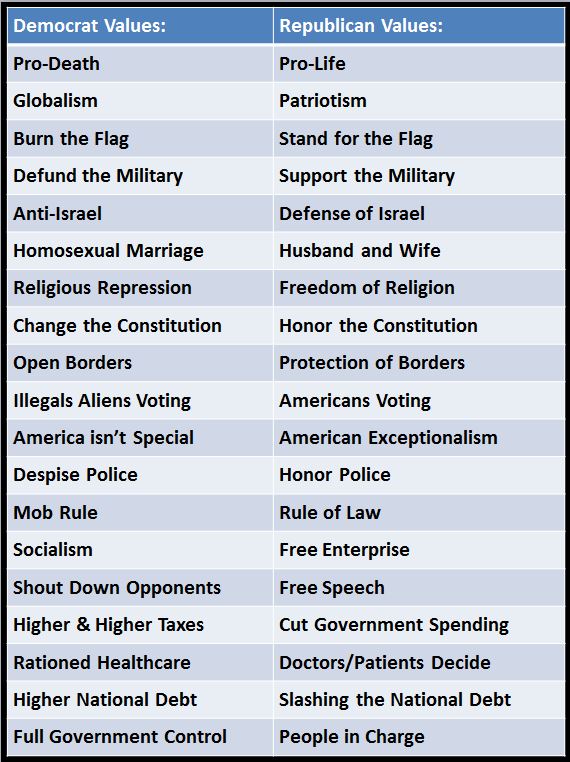 Is it too early to start thinking about the next presidential election? It used to be. In fact, here at Conservative Truth, only a percentage of our articles focused on politics except every four years in what we called "election years." The other three years more of our articles were about social and moral issues, such as abortion, the sorry state of our public schools, and the hoax of global warming. But the time to focus on presidential politic keeps being pushed back to the point where it seems that every year is an "election year."

So I thought I would publish my own special Voter Guide early, on the premise that it's never too early to learn about our enemy. Are the Democrats our "enemy?" Well, Conservative Christians are at war with at least the leaders of the Democrat Party. That makes them our enemies. We want to uphold the Godly values that made this nation exceptional among all thenations of the world. They want to destroy those very values. If they can't totally destroy them, the want to ridicule them as "old-fashioned" or "puritanical."

When I was in high school, if a girl was not a virgin it was shameful. Today if a girl hasn't slept around by the time she is a teen, she is shunned as thinking she's better than others. If a boy smoked weed in the bathroom, we was immediately expelled. Now teachers are lighting up during school hours.

These and other major changes in our nation's morals are a direct result of the Democrat Liberals taking charge of our school systems, the media, and the courts. The only way to fight the battle for the soul of our nation is to know our enemy. If we continue to lie to ourselves by pretending that the evil Democrat National Committee is composed of patriotic Americans who really want the best for our nation, but are just misguided, we will lose the battle.

If we recognize that they are the mortal enemies of the Constitution and the America that our founders gave us, we are not being intolerant. We are being truthful. In the Book of Luke in the Bible, we are told that when we go to war, we are to count the cost. If the cost of truth is being ridiculed and reviled, we have to accept that. If our goal is to be liked by everyone - including the Democrats whose goal is to beat down this nation until we are willing to submit to a one-world government - that can only happen if we fail to stand up for Biblical truth.

By the way, the Bible says to "Beware when all men speak well of you."

NOTE: This is just a summary of the values of the two parties. There are more detailed Voter Guides available, which I suggest that you review, print and distribute in your churches and other organizations. Don't believe the lie that non-profit organizations are not allowed to do this. We have been doing it for decades, and not one 501(c)3 has lost its status as a result.

One excellent source (among many) is www.VotingInfo.net. This shows the two parties views on vital issues IN THEIR OWN WORDS.

You can also see the full platforms of each party at: