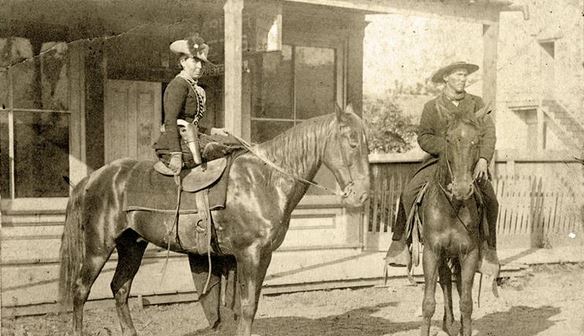 When faced with solid arguments for the use of guns for self-defense and other pesky facts like the Second Amendment to the Constitution, Liberals often respond: “We can’t go back the Wild West, when everyone carried a gun." Really? Why not? They never explain why that was bad.

In fact, after a decision by the Supreme Court affirming the right of individuals to own guns, then-Chicago Mayor Richard Daley sarcastically said, “Then why don’t we do away with the court system and go back to the Old West? You have a gun and I have a gun and we’ll settle it in the streets?”

In a 24-hour period this week we saw 29 people die in two mass shootings in two states. Earlier in the week there was a shooting in California in which 3 died. (Technically, that didn’t qualify as a “mass shooting” because at least four have to die. Who makes such stupid distinctions?) But taken together, aren’t those shootings prime face evidence that all guns should be forcibly taken from U.S. citizens?

Most of the myths that we believe about the Old West are just that – myths based on popular Western movies and pulp fiction books. The supposedly frequent shootings made a lot of money for the producers of the legends, but there was very little truth in them.

WAS THE OLD WEST REALLY SO WILD?

Let’s look at the “Wild West” and see if the Liberals theories hold up.

A lot of the false information about life in the West in the early days of America comes from false narratives in the old Western movies, and is used to the advantage of Liberals in their obsession to overturn the Second Amendment. For instance, why are Jesse James and Billy the Kid so widely known? Simply because the bank robberies they committed were so rare. In fact, during the 1800’s only eight bank robberies were committed. This is because the bank and the Sheriff’s office were downtown, close to one another. But if you are a fan of old Western movies, you would think that there was at least one bank robbery every week in every town and village of America.

The Democrats and Liberals seize on the false impressions and claim that crime was rampant in the old West – because there were so many guns. In fact, the exact opposite was true. There were very few crimes because of the very real threat that the person committing a violent crime would be shot by a citizen long before the Marshall could amble down the street to take charge.

“It is true that gunslingers were ubiquitous. Nearly everyone had a gun. But you were safer to live and work in Abilene, Kansas in 1878 than in Southside Chicago in 2018. Between 1870 and 1885, the murder ratewas roughly one murder per 100,000 residents each year in numerous towns. Oregon maintained a murder rate of 30 per 100,000 adults. Some cow towns did not even experience a single killing in 1869 or 1870, like Abilene or Wichita. Many places only reported 45 murders in a 15-year period.”
From “Was the Wild West Really so Wild?” By Andrew Moran

“If, as many popularly assume, much of America's crime problem is a consequence of a heritage of frontier violence and lawlessness, then it is ironic that the crimes most common today—robbery, burglar, theft, and rape - were of no great significance then, and, in the case of rape, seemingly nonexistent in Aurora, Nevada and Bodie, California.” (Statistics on Aurora and Bodie, two of the major cities of the time, were cited often by the author of this scholarly three-volume study because they kept good records.)
From “Violence in America” by Roger D. Mcgrath

“Another injustice that movies did to those who lived in the west all through the 19th century was the fact that they were all portrayed as either gunslingers, land grabbers or mere sheep who worshipped the powerful. In reality, the situation in the old west was not that bad, actually less violent than the other parts of America. The rate of homicide was significantly low; there were no choreographed gun-bouts, no mass hangings; to put it in one term ‘west was never the way you may remember from the western movies’.”
From “Myths About the Wild West that Westerns got Absolutely Wrong” by Ian Harvey

SO, WHAT’S THE ANSWER?

In a short article, it would be impossible to discuss all the factors that contribute to mass shootings. A short list of these would include the emptying of mental health institutions by the government that began in 1965. Most of those patients are now homeless, and many are violent. Then there’s the prevalence of violent games and movies that desensitize viewers to violence. Another factor is permissive parents who believe their precious child can do no wrong – even when warned by school authorities of violence committed by their little darlings. And, of course, there are the Democrat-controlled cities who won’t let the police do their jobs, and are now reaping the fruit of their stupidity.

However, chewing on what got us here doesn’t do any good, except insofar as it guides us to change our policies. We need solutions that we can implement today. There are only three that can be rolled out swiftly and that would guarantee that fewer would die in mass shootings. Note that these would not stop mass shootings totally, but would greatly decrease the number that take place, and would ensure that the killer would be taken down before he could fire many shots – in many cases before he could even fire one shot.

At first I was confused by the fact that during the six minutes it took for the police to arrive, not one citizen fired a shot at the murderer. There are probably more legal guns per capita in Texas than any other state. Then I discovered that the Walmart in El Paso was a “Gun Free Zone.” I WILL NEVER SHOP AT A WALMART AGAIN.

In my mind, and in the minds of many astute political observors, President Trump's re-election is a forgone conclusion. There is not a Democrat in the race, nor one waiting in the wings, that can lay a glove on him. In other words, this is Trump's race to lose. Unless...

There are rumors that, in the wake of this week's shootings, Trump is considering siding with the Democrats and some left-wing Republicans to further reduce the rights of U.S. citizens to keep and bear arms. Fair warning, Mr. President: If you do that, a very large portion of you base will desert you, and "Sleepy Joe" may well become the next U.S. president.

Bring Your Gun to Church Week

How the Release of Mental Patients Began