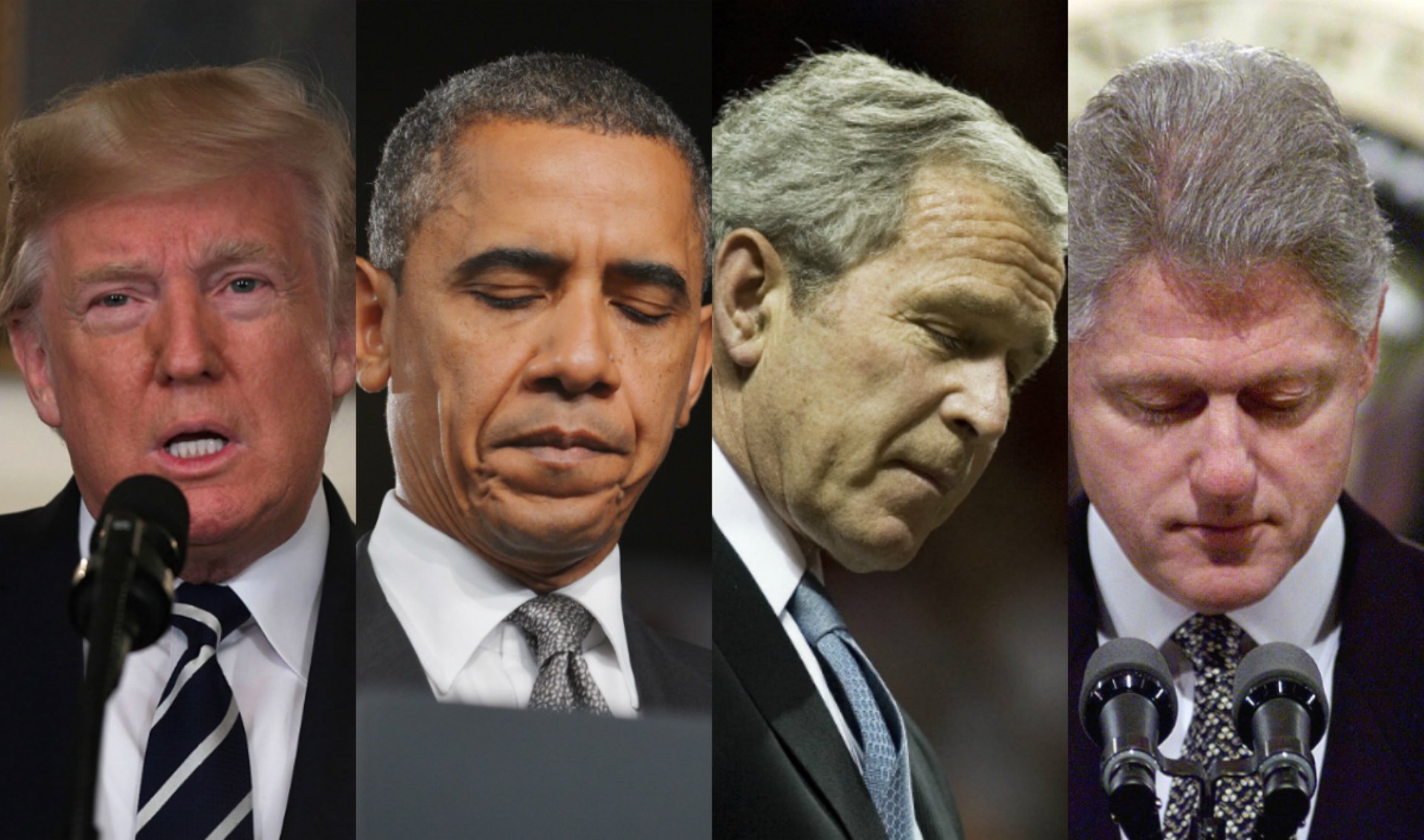 Every president since Lyndon Johnson has had at least one mass shooting on his watch. In a study of “America’s Deadliest Mass Shootings,” (see article link below) 52 of the worst were studied. Interestingly, 24 of those – almost half – occurred during Obama’s presidency. But until this week, not once have the media and the Democrats been so vile and evil as to blame any president for such an incident.

Every one of the twenty plus Democrat presidential candidates have tried to place the blame for both the El Paso and the Dayton shootings squarely on President Trump. Some of the worst, including Robert Francis O’Rourke and Cory Booker went so far as to call the President a “White Supremacist” and say that his “hateful” rhetoric had caused the shootings.

When I first wrote about this, I expressed hope that the Democrats would wait a decent amount of time before making it political. Unfortunately, the first victim was not even buried before they started trying to make political points from the tragedy. Elizabeth Warren and several other candidates even used the killings to raise funds for their hopeless campaigns. Even Joe Biden, the supposed “moderate,” irresponsibly attacked the president as a “White Supremacist” – even though there has never been anything in the president’s words or actions to support such a disgraceful lie.

But here’s where this all gets interesting. The Democrats and their media lackeys think we are stupid. They think we can’t read or do research. They think we will take their hateful sound bites at face value, and that they will be able to use these two shootings to help them win in 2020. But we are not stupid and we do know how to read (no matter how many times they call Conservatives “deplorables” and, in Joe Biden’s words, “the dregs of society.”

Here is what his deplorable has discovered:

First, they always talk about the shootings as if they were the same, and the motivations of the shooters were identical. If they can fool us into thinking that, and convince us that Trump is a racist, they can lay the blame for both shootings on the President. Sorry, Democrats, that dog won’t hunt. The two shootings (and the two shooters) are worlds apart.

The El Paso shooter died on the scene, so he’s not talking to anyone but Satan. However, he was kind enough to leave behind a “manifesto” explaining his twisted logic and reasoning. The Democrats have cherry-picked parts of it that they think make their case, and have ignored the majority of it that tells and entirely different story. And guess what. Instead of taking parts of it out of context as the Democrats have done, I have provided the entire unedited “manifesto” below in the Internet Research section.

This is what he said regarding his motivation and the fact that Trump played no part in his decision to shoot up the El Paso Walmart:

“My opinions on automation, immigration, and the rest predate Trump and his campaign for president. I am putting this here because some people will blame the President or certain presidential candidates for the attack. This is not the case. I know that the media will probably call me a white supremacist anyway and blame Trump’s rhetoric.”

His own words show how the Democrats and the media have deliberately misled America (that’s a nice way of saying they lied through their teeth). You can be sure they read the entire manifesto, including the paragraph I just quoted. But did you hear anything about that on the news or out of any lying Democrat’s mouth?

But here is where it gets really interesting. Much of what he wrote could have been written by the Democrat and environmental wackos themselves. It turns out he had a lot more in common with them than with the president. Again, you won’t hear this on the news. They love to talk about freedom of speech, but they engage in censorship as much as any dictator in history. If it doesn’t fit their narrative, it doesn’t get printed.

One interesting this is that he blames both Democrats and Republicans for the problems he perceives in America. He speaks favorably of “Achieving ambitions social projects like universal healthcare…”He decries the fact that, “Recently, the senate under a REPUBLICAN administration has greatly increased the number of foreign workers that will take American jobs.”

He goes on to state, “Our lifestyle is destroying the environment of our country. The decimation of the environment is creating a massive burden for future generations. Corporations are heading the destruction of our environment by shamelessly overharvesting resources. This has been a problem for decades. For example, this phenomenon is brilliantly portrayed in the decades old classic “The Lorax”. Water sheds around the country, especially in agricultural areas, are being depleted. Fresh water is being polluted from farming and oil drilling operations. Consumer culture is creating thousands of tons of unnecessary plastic waste and electronic waste, and recycling to help slow this down is almost non-existent. Urban sprawl creates inefficient cities which unnecessarily destroys millions of acres of land. We even use god knows how many trees worth of paper towels just wipe water off our hands.”That sounds like it could have been written by Alexandria Ocasio Cortez, who believes the world will end in twelve years unless we do exactly as the thirty-something bartender tells us to do.

So, the El Paso shooter makes it clear that he came to his anti-immigrant position before Trump even came on the scene. (By the way, Trump is anti-ILLEGAL immigration. This crazy dude complains about Congress allow legal immigrants into the country.) And his views on universal health care, stopping oil drilling, and extreme environmental views come straight out of the Democrats playbook. Did they forget to mention these things or did they censor them. I’ll report, and let you decide.

A last thought of the El Paso shooter’s manifesto. Unlike others I have read, his is remarkably cogent and well-written. His logic (considering that he is crazy) tracks well, and he builds his case more skillfully than those of some college student’s papers I have graded. So while he was evil and mentally ill (you have to be crazy to murder people), he was not stupid. He made one statement that has stuck with me, because it is absolutely true: “Remember: it is not cowardly to pick low hanging fruit. AKA Don’t attack heavily guarded areas to fulfill your super soldier COD fantasy. Do not throw away your life on an unnecessarily dangerous target. Attack low security targets.”The media would have us believe that he just went to the Walmart because he was hungry, and then he decided to start shooting. They want us to believe that the target was random; but his own words refute that.

He picked the Walmart because it had big signs designating it was a “Gun-Free Zone.” That sign was an open invitation to mass killers to “come on in and shoot our customers.” When this first came out on the news, I thought, “This is Texas. Out of the reported three thousand people in that store, hundreds must have been armed.” Later it came out that, even though Texas allows citizens to carry weapons concealed on their persons, Walmart chose to negate that law with their asinine policy. Had it not been for that sign, the shooter would have gotten off only a few rounds before a patriotic citizen would have dropped him.

I predict a massive class-action lawsuit against Walmart. I hope it turns out to be one of the most costly in our nation’s history.

Now it gets really interesting. Remember that the Democrats have done everything in their power to conflate the two shootings. But, as I said, they are nothing alike except that people were killed in both incidents. The Dayton was killed by police within 30 seconds of firing his first shot. But his social media posts, his friends, his voting record, and school records all demonstrate his extreme Leftist ideology. But have you heard the Democrats say one word about his political leanings? Nope, and you never will.

It turns out the Dayton shooter is totally on the Democrat side of the aisle, and has voted numerous times in Democrat primaries. Like most Democrats he was anti-Semitic and hated Israel; he once showed videos of the Pittsburgh synagogue shooting while on a date. Also like his fellow Democrats, he hated ICE. According to a former friend, he was definitely anti-Second Amendment. He was a big fan of Elizabeth Warren, crazy Bernie Sanders, and Antifa, the extremely violent left-wing organization that has been protected by the Democrats. Congressional Democrats are the only reason Antifa has not been designated a Domestic Terrorist Organization.

The Democrats say the way to stop mass shootings is to watch for disturbing actions, and make sure mentally ill people don’t get guns. “Universal Background Checks!” they cry. This sicko had a “kill list” and a separate “rape list” of his classmates. Is that disturbing enough? No background check would have picked that up. But school officials knew about it, and apparently did nothing. Friends were so disturbed by him talking about shooting up bars that they reported him to police – who also did nothing. And he bought his weapons legally.

So, let’s compare the Dayton shooter’s views (from his own posts) with those of the Democrat party, and see if he checks all the boxes:

If anything about this terrible serious event can be funny, I find it hilarious that now that the Dayton shooter’s politics are becoming known, the Democrat media outlets are furious that readers are drawing the same conclusions from his clearly leftist words that they have tried to draw between the El Paso shooters very mixed messages. “It’s beyond irresponsible to use the Dayton shooter’s lefty Twitter to assign a political motive,” wrote NBC News reporter Brandy Zadrozny. “The far-right would like to equate Dayton to El Paso. Don’t let them.”

Finally, one of his last Tweets implored his followers, to "Vote blue for god’s sake!" And the Democrats say he was not political. And there was no racist component to this shooting. He didn’t hate minorities. He just hated Republicans and Conservatives. He “condemned conservatives as ‘Nazis’ and ‘fascists’ who deserve to die.”

I’ll let Townhall (see article link below) wrap this one up for me. “Now, CNN has finally admitted Betts supported Antifa, though its reporters did everything they could to marginalize the development. It’s beyond absurd. Political convictions matter when it can be weaponized against Republicans and the Trump White House, as in the case of El Paso. But when it’s a left-winger killing people—don’t you dare bring up his or her social media history and political views.”

2020 Candidates Blame Trump for the Shootings; Which One of Their Proposals Would Have Prevented These Attacks?