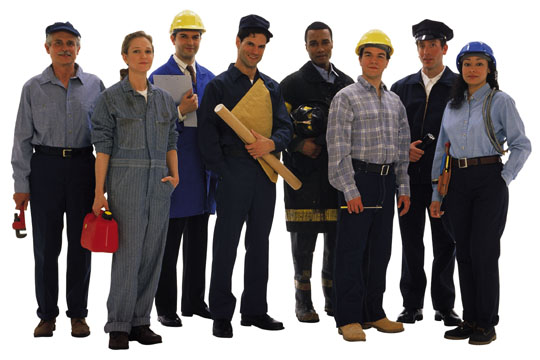 When I was a young man (about 100 years ago) I was working on a construction job when a friend saw me and stopped to say “hi.” He asked me why I was working on the Labor Day holiday. I told him I was glad that I had work to do, since at that time jobs were scarce in the construction industry.

Today, thanks in large part to President Trump's economic policies, we have record low unemployment. The unemployment numbers are so low that economists consider us to be at full employment. This is because some people don't want to work for a variety of reasons. It's safe to say that almost anyone in this nation that wants a job can have one.

That has been true at various times in the past, but the amazing thing about the Trump economy is that it benefits minorities who have been traditionally left behind. We have the lowest-ever unemployment rate in national history for blacks (7%, down from 17% under Obama) and Hispanics (4.5%, down from 13% under Obama). Unemployment for women is at near-record lows. Why any American would even think of voting for any of the 24 Democratic clowns who want to take up where Obama left off is amazing to me. They would take us back to the bad old days of the failing Obama economy.

Remember when Obama told us that 2% GDP growth was the "new normal," and we'd better get used to it? We've already hit 3.5% under Trump, and senior economists are confident that will increase to 4%.

Remember when Obama told us construction, coal, and oil sector jobs were gone? They were - while he was president. But under Trump, those jobs are increasing every quarter. American labor is back!

Obama claimed that he “created or saved” 4 million jobs. Let’s set aside his ridiculous allegation that he “created” or “saved” jobs because that means nothing. If it actually were a legitimate claim, then the supposed 4 million jobs could be in either of those categories. Since there is no way to demonstrate that a single job has been “saved” (in other words that it would otherwise have been lost if Obama hadn’t spent almost a trillion dollars of our money on his failed “stimulus”), his words are nothing more than an attempt to fool non-thinking people.

As far as the number of jobs supposedly “created,” that too is questionable. The fact is that the claim of “4 million jobs” actually falls short of the number that should have been created in the normal course of events - in other words just keeping up with population growth. So, in truth, the nation lost jobs under Obama.

It is true that there were net gains of jobs in one particular sector under Obama – government jobs. But those have been far out shadowed by the loss of jobs in the private sector. You may ask, “What’s the difference? A job is a job, isn’t it?” No, there is a huge difference.

Public sector jobs, or government jobs, produce nothing. Worse, they drain resources (in the form of taxes) from productive, private-sector jobs. So the addition of government jobs actually weakens our economy.

Then there is the cost of job creation. Using Obama’s own propaganda on his website, each job “created or saved” cost the U.S. taxpayer well over $200,000. The average cost of a job created in the private sector is about one-tenth of that - $20,000.

So the far more expensive government jobs drain the economy, while the relatively inexpensive private sector jobs help improve the economy. Do the math.

But that is not the point. The point is that bureaucrats produce nothing of value. They add nothing of substance to our economic health. Of course, a small number of bureaucrats are necessary to run the constitutional functions of government. But 75% of what government does today is not constitutional (and that number is generous). The more government employees are added, the more crippled our economy becomes.

President Trump understands all this, because he has spent his whole life meeting payrolls, building businesses, and balancing budgets. Obama's entire resume included community activist, a politician in one of the most corrupt states in the union, and claiming to be a Constitutional law professor (he was only a part-time lecturer - never a professor).

Here are some sobering facts. Obama claimed he was the great champion of the middle class. But the majority of jobs that were lost on his watch were middle-class jobs. And – with the exception of high-paid government employees – most of the new jobs are low-wage, entry-level positions.

Presidents can only create government jobs. These are not the kind of jobs America needs, but those were the jobs Obama produced. He focused on the government as the solution, because he believed that would gain him more votes. It did, but it is also why he failed abysmally in his role as Economist-in-Chief.

President Trump understands that the job of the Economist-in-Chief is to create a climate in which job growth can take place. That means a business-friendly climate. The Obama administration was rabidly hostile towards job creators. The Trump administration has encouraged the growth of small businesses, which create more than 70% of all new private-sector jobs.

The President's plan to make our economy roar is simple - and it's working. It includes...

1) Developing our own energy resources to make the U.S. independent of foreign oil. In addition to starving terrorists of money (yes, most of our oil dollars under Obama supported terrorist regimes), this has put billions of dollars into our economy by creating hundreds of thousands of jobs. Obama blocked the Keystone pipeline to make his “green” voters happy, losing at least 20,000 jobs. Trump approved it.

2) Trump is making foreign trade fair for America for the first time in decades. He's cracking down on cheaters like China. China’s unfair trade practices, theft of American intellectual property, and manipulation of their currency stole American jobs. Europe, Mexico, and Canada, our friends, have also been ruthlessly taking advantage of America because we have had wimps as president. Yes, Trump's tough trade negotiations have caused a lot of heartburn. But they're working. And in the long run, even the Socialists in Congress will have to admit that having a businessman in the White House has greatly improved our economic standing on the world stage. Trump stands up for America; Obama apologized for America.

3) Obama doubled our National Debt during the eight years of his Reign of Terror. (No president in history has even come close to such an appalling betrayal of the American people.) Obama’s budget was rejected 99 to 0; it was so terrible that not one Democrat voted for it. Trump will fight for a balanced budget because that's what business people do. The community organizer never recognized that there are consequences to spending twice as much as you take in.

4) Obama plan was to raise income taxes from an already unbearable 35% to a crushing 40% rate. Under him, we had the highest corporate tax rates in the world. Trump has lowered taxes, reduced the regulations that strangled business growth, and is closing to repealing the monstrosity called Obamacare. Business owners said the reason they didn't hire new employees was the enormous burden Obamacare placed on them. Trump is turning that around.

In the 233 years before Obama became president, our nation grew into the strongest economy in the world. Obama managed to diminish us to the point where the average family income was actually $4,000 per year less when he finally left than it was when he took office. His brand of “leadership” almost destroyed our country. If we elect one of the Obama clones who will eventually run against Trump, we could devolve into a third-world banana republic.

By contrast, Trump knows has turned our economy around and is making America strong again. Trump is a patriot who is also a billionaire. He donates his salary to charity. I mention this because, unlike Obama, he doesn’t need to become president to live in a nice house, ride in limos, and fly around in private jets. (Obama came to the White House broke - according to his own wife - and left a multi-millionaire.) Any of Trump's houses are nicer than the White House. He became president to serve our nation, a concept that was foreign to Obama - and is foreign to all the Obama wannabes who would follow his disastrous policies.