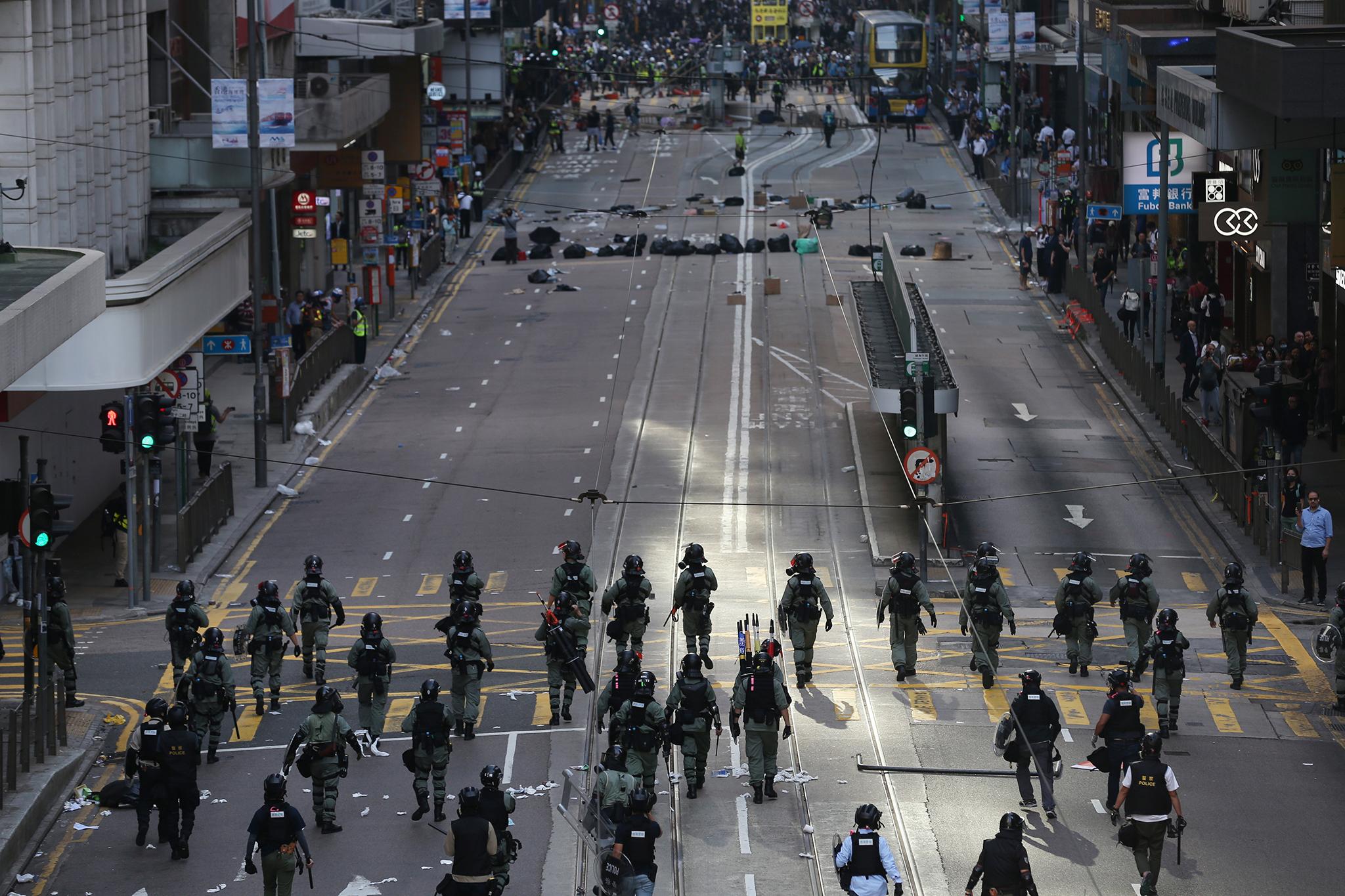 In a speech, a politician says, "Some of my friends are for this issue, but others are against it. I want to make it very clear that I stand with my friends."

One of the main reasons people love President Trump is that he's not a politician. But this morning I heard him say something that makes him sound a lot like a politician.

"I stand with the people of Hong Kong." So far, so good. But then he said, "I also stand with President Xi." Not so good. In fact, terrible.

You can't have it both ways, Mr. President. You can't "stand with the people of Hong Kong" who are being beaten, tortured and imprisoned by a brutal Communist dictator - and in the next breath say, "I also stand with President Xi."

Obviously I am not the president, and I can't know all the stress and demands from all quarters that you experience every day. But I am a citizen of this nation, and I have the right - no matter what pressures you face - to expect that my president not speak out of both sides of his mouth.

I realize that your style of negotiation involves making personal connections with your opponents. I understand that it's difficult to tell the truth about an awful person in public, and then expect him to concede to your demands in private negotiations. Xi has a 'YUGE' ego, just as you do. But the truth is he is not your friend. I know you say he is in public for diplomatic reasons, but the fact is he is a major enemy of the United States, and therefore he is your enemy.

I also realize you are involved in important trade negotiations with Xi and China, but as one of your key advisors (I know you read Conservative Truth every week), I feel obligated to remind you that China has made innumerable promises and signed many treaties with the U.S. They have never honored one of them unless it was in their interest. You have to deal with the reality that your charm and negotiating skills are not going to turn a treacherous man into an honorable man.

Xi only respects strength. You have proved yourself capable of being tough and even brutal when the situation demands it. You told the little weasel dictator of North Korea that you would annihilate his nation if he didn't back off. Xi respects you less when you make statements like you did today. He knows you can't both stand with the oppressed people of Hong Kong and at the same time stand with their oppressor. He was not impressed with your claim that you stand with him. I guarantee you that he is laughing at you with his cronies right now.

Mr. President, I am one of your most vocal supporters. But I fear that you have forgotten the trillions of dollars China has stolen from the U.S. through theft of intellectual property, unfair trade practices, illegal currency manipulation, and forcing U.S. companies to reveal their trade secrets and formulas in order to be able to do business in China. You were railing against these very things not many months ago. Have you forgotten already?

A brief history of Hong Kong. According to Wikipedia, Hong Kong was originally ruled by China up to the Qing dynasty in 1842 when the Treaty of Nanking ceded the island to the British Empire and later expanded to include the Kowloon Peninsula in 1860 after the Second Opium War and later by the Convention for the Extension of Hong Kong Territory in 1898 to lease the New Territories.

What led to this? Two U.S. presidents (not surprisingly, both Democrats) betrayed the free people of China in favor of the Communist dictatorship of the so-called "People's Republic of China."

In 1972, after the change of the Chinese seat in the United Nations, the People's Republic of China, established in 1949 after the lengthy civil war, requested that Hong Kong be removed from the United Nations list of Non-Self-Governing Territories, thus depriving Hong Kong of its right to independence. A Chinese-British Joint Declaration of December 1984 laid out the terms for the transfer of sovereignty of Hong Kong from the United Kingdom to the PRC, which concluded with a special handover ceremony on July 1, 1997.

The “handover” ceremony should have been named the “Betrayal Ceremony.” After promising Hong Kong democracy and independence, the not-so-Great British Empire betrayed Hong Kong and condemned thousands of Hong Kong residents to death or expulsion. Between the time of the 1984 agreement and its implementation in 1997, many thousands of Hong Kong citizens fled, knowing they would be marked for execution by the Communists due to their strong pro-democracy stands.

Bill Clinton also participated in the betrayal. He sent his Secretary of State to the 1997 ceremony, signaling to the Communists that he wanted their trade more than he valued the lives and freedom of the citizens of Hong Kong.

An article published in the Wall Street Journal by Senator Jesse Helms at the time of the handover begins, "At the upcoming ceremonies marking the return of Hong Kong to China, the most important participant will not be China's President Jiang Zemin or Britain's Prime Minister Tony Blair, but U.S. Secretary of State Madeleine Albright.

What about the unrest in Hong Kong in the past few months? Most of the world (including almost every legislator in both houses of Congress) call the demonstrations that started out peacefully “freedom of speech and expression.” The Communists – and now President Trump – say they’re “rioters.” What is the truth?

The truth is that the demonstrations started out peacefully. The two main issues were a new law that would allow Communist China to extradite any Hong Kong citizen they considered a criminal to the mainland, where they would face the draconian “legal” system of the regime. Under Beijing’s laws, a citizen of Hong Kong could be deemed a criminal for speaking out against the Communist government or simply speaking in favor of democracy and self-determination. Sentences could be life in prison or even execution.

Also, simmering below the surface since 2000 has been the desire of the citizens of Hong Kong – a desire shared by every person on earth – for freedom. They want to vote for their own government officials, make their own laws, and enjoy what we in the United States enjoy – independence and self-determination. The Communists have put up with this since Hong Kong makes them so much money. But the extradition blew the top off the discontent.

So how did the peaceful demonstrations become “riots?” Simple self-defense. The Hong Kong police, who are controlled by the Communists, started using violence against the protestors. And the protestors defended themselves. They are not allowed to have weapons (take note, U.S. citizens) so they have used whatever they had to defend themselves against the heavily armed and armored police, including sticks and bats. The picture that accompanies this article was taken right after the police murdered a 14-year-old boy. His body is one of those you can see on the ground.

What is unfortunate is that our president has now adopted the rhetoric of the Communists. By calling the protests “riots” he gives cover to the brutal dictators, who have used his words in their propaganda newspapers to defend their atrocities.

Worse, he has backed off the position of the vast majority of Americans and almost everyone – Democrat or Republican – on Capitol Hill. Instead of expressing support for these poor people, he now says, “It’s China’s problem. They don’t need advice.”

In the Hong Kong District elections just held, the pro-democracy candidates overwhelmingly defeated the pro-Communist officials capturing 90% of the District seats. That has to concern Beijing. But the problem is that Communist China controls the office of the Chief Executive – similar to a president or prime minister. Unless that changes, the pro-democracy legislators can gain every seat – but Beijing will continue to call the shots.

In a time when bipartisanship is almost as scarce as honest politicians, Congress has come together to pass a bill supporting Hong Kong. Almost everyone in the House and 100% of the Senate has voted for it. If President Trump is foolish enough to veto it, it is almost certain that Congress will override his veto, which would be very embarrassing for him. If he doesn’t either sign or veto it, it will automatically become law.

“There’s overwhelming support for this as you know, 100 [votes] in the United States Senate. I would imagine there would be an override of this. I would encourage the president to sign it,” Senate Republican Conference Chairman John Barrasso, R-WY.

Just think. If it weren't for the treachery of Jimmy Carter and the cowardice of Bill Clinton, our stores would not be full of cheap Chinese junk. We would still be doing trade with free people in Hong Kong and Taiwan. Mr. President, please don’t continue to propagate this farce. China is not our friend, and they will never be a reliable trading partner. Sign the bi-partisan bill condemning the Communist aggression in Hong Kong, and show President Xi that you are not afraid of him.

Is Hong Kong a Nation? Yes and No