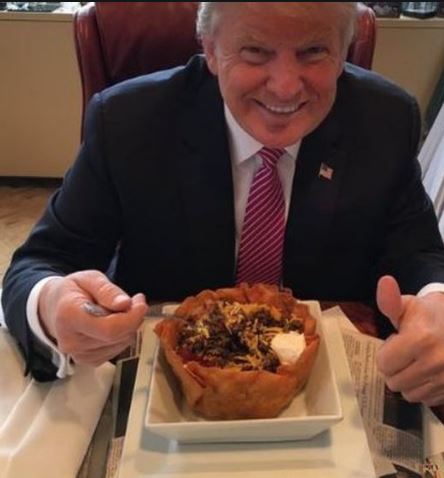 Don't worry. That’s not shredded Democrat that the president is enjoying in his taco bowl. But according to the newest Democrat presidential candidate, Michael Bloomberg, President Trump may soon be eating Democrats.

How did this strange state of affairs come about? Bloomberg was asked why he decided to run so late in the game. After spouting the usual self-serving mumbo-jumbo about the amazing groundswell of support from people who insisted that he run because of his amazing acumen and leadership skills, he finally got real.

By the way, until he made those claims, has anyone heard anyone begging Bloomberg to run? I certainly haven’t. Perhaps it was a figment of his imagination, or maybe a dream when he was in a drunken stupor. I can’t imagine anyone except his family and people on his payroll who would encourage someone with a zero personality quotient to run for president. He is as stiff and wooden as a totem pole, with all the personality of a cockroach.

Perhaps his decision was made based on the huge number of donors to his campaign, usually a very reliable indicator of a candidate’s viability. No, that’s not it. He hasn’t gotten a single donation. He has decided to use his mega-billions to buy the presidency. This follows his policy when he ran for Mayor of New York. He spent $70 Million back in 2001 – approximately $90 per voter. To put that in perspective, in a city race he spent more than Ross Perot did on his presidential run. In his first week in this race he spent $34 Million on ads – more than all the other Democrats together.

OK, so his decision was probably made based on his poll numbers. No, that can’t be it. In the latest Democrat 2020 Preference Poll, the only ones he beat were Kamala Harris (who has dropped out) and the crowd who couldn’t qualify for the debates. Even “Unsure” beat him.

Well, it must be due to his strong support in his political party. Which party? In his younger days he was a very Liberal Democrat. Then from 2001 to 2007 he decided he was a Republican (mostly because the Democrats didn’t want him to run for mayor and wouldn’t support him). Then he flip-flopped yet again, this time emerging as a registered Independent. Finally, in 2018 he became a Democrat again, just in time to run for president. Since he changes parties as often as he changes socks, I imagine it will be hard for the Democrats to trust him. Who knows? If he manages to get elected, he may decide to register as a Communist just to spite the party bosses who hate him.

What about the debates? No one in recent history has earned his or her party’s nomination without participating in the debates. He has already missed most of them. And with current rules, which require a large number of individual donations and a decent standing in the polls, he cannot qualify. But when he ran for Mayor of New York, he made massive political donations to the five Republican parties in the city, as well as to the Independent Party. I have a sneaking suspicion that a few million given to the Democrat National Committee might make them change their rules.

It sure worked for Hillary. The DNC was in serious financial trouble. Hillary donated with millions, and basically took over the party apparatus. And poof! Bernie Sanders, who had been giving her a run for her money, was shut out and had no access to donor rolls or the email lists of the party, assuring that Crooked Hillary would get the nomination.

Discussing his reasons for entering the race, he said he worried that if other Democrats took on President Trump in a general election, Mr. Trump would “eat ’em up.” I wish he had said, “Beat them up.” Making the president sound like a cannibal is not good politics.

What Bloomberg Said about his Democrat Rivals on TV
https://www.nytimes.com/2019/12/06/us/politics/mike-bloomberg-cbs-interview.html

How Bloomberg Could Win
https://www.politico.com/news/magazine/2019/12/02/michael-bloomberg-win-new-york-mayor-race-074060