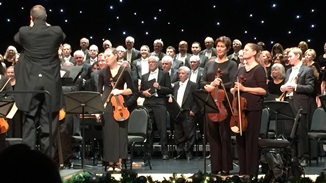 I don't believe there has ever been a "Flash Mob" in a private residence. The one that took place at our "After-Christmas Party" last Friday may well be the first in history!

A "Flash Mob" is when a group of people suddenly emerge and start to perform. Usually they sing, but sometimes they dance or act out scene from a play. These take place in public squares, malls, downtown areas - any place where people gather. The surprise and joy are contagious. Cell phone cameras start clicking and the audience often joins in on the singing. My favorite flash mob of all time can be seen here: Mall Flash Mob.

We had forty people at our party. But eight of them were plants. All but one of them were members of the Masterworks Chorus of the Palm Beaches and friends of mine. Two were my daughter Sarah and myself. Every year for the last 41 years the Masterworks Chorus (the fine people you see depicted above) have performed Handel's Messiah. They just keep getting better and better as the years go by. This year we had one lady who had performed every year for 41 years, and one gentleman who had performed for the last 40.

If you live in South Florida, visit www.MasterworksPB.com and come to one of our two performances next year. They're usually held around the middle of December. If you live elsewhere, most towns of any size have a performance of this most beautiful of all Christmas music. It is performed tens of thousands of times around the world at Christmas time.

Back to the party. We had the usual great food and fellowship seen at such events, plus a fire pit outside for quiet conversations. (40 people, including lots of kids, brought the inside sound level up quite a bit.) And then we had what people thought was the high point of the party - lots of Christmas carols accompanied by piano and guitars.

But then we had the real surprise. I told the moving story of how Handel, under the influence of the Lord, wrote the Hallelujah Chorus, the most popular (and powerful) part of the Messiah. That was the signal for a double quartet of the great members of the Masterworks Chorus to stand and sing the Hallelujah!

The whole evening was fun. It was great to see friends that we had not seen in a long while. But for me the high point was when Jesus was honed and exalted as we sang the Hallelujah Chorus live in our own home.