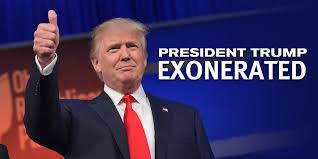 Nancy Pelosi, the wicked witch of the House of Representatives, pretended to be sad about impeaching the President of the United States and causing the great divide in our nation to become even wider. She said the impeachment was a “somber and sober” occasion, and claimed she prayed long and hard about it. But when she signed the articles of impeachment, she was absolutely gleeful, smiling broadly while she handed out souvenir ballpoint pens engraved with her name in celebration.

She had nothing to celebrate. Everyone in the nation knew from the beginning that impeachment by a Democrat-controlled House of Representatives was a waste of millions of our tax dollars, and hundreds of hours of time when the House could have been working on real legislation that would help Americans. This was nothing more than purely partisan political stunt with not a prayer of success. The only aspect that was bipartisan was that three Democrats voted against one or more of the Articles. Not one Republican voted for them.

HE HASN'T WON YET - OFFICIALLY

My headline is a few days early. The president has not yet been fully exonerated and acquitted of all changes. That will happen in a few days. This is certain because Republicans control the Senate, where the real decisions will be made.

“But Tom,” you may say, “Isn’t that unfair? The Democrats are saying that the Republicans won’t be ‘impartial jurors,’ that they have already made up their minds.” That’s at least partially true. It is also true that the Senate Democrats will most likely not be impartial. Months and even years before the impeachment proceedings began, most of them have stated publicly that our president is a criminal, a traitor, and an agent of a foreign government.

The same is true of the Democrats in the House. Their leaders decided three years ago to impeach Trump for the crime of beating Hillary in a humiliation electoral landslide. Since the day he was elected they have been desperately searching for something they could claim was an impeachable crime.

WHY THE KANGAROO COURT IN THE HOUSE?

So why go through this entire charade at all? If this had been a legal proceeding, the judge would have thrown out the flimsy “evidence” presented by the Democrats as unverifiable hearsay. He would have considered this a “frivolous prosecution,” and likely sanctioned (punished) the prosecutor who dared to bring him such a biased case. There would have been no Senate trial.

We need to understand that impeachment was never intended by the framers of the Constitution to be a legal proceeding (even though the Democrats have been trying to make it appear so). The men who wrote our Constitution designed it to be a purely political exercise.

Allow me to break it down. If the Democrats were in control of both chambers, the president would have been impeached, probably found guilty (of something) and removed from office. If the Republicans were in control of both houses, he would never have been impeached. It’s that simple, because the Founders designed it that way. If they had wanted real impeachment trials, they would have required a dozen impartial jurors to be empaneled. They would never have allowed partisan senators to serve as the jury.

WHAT DID THE FOUNDING FATHERS HAVE IN MIND?

So why does the Constitution require a purely partisan proceeding wherein almost every case the voting is on party lines? They believed that if a president or other high federal official had committed an overt and obviously egregious crime, members would cross party lines, as some Republicans did when they voted with Democrats to find Slick Willy Clinton innocent. Literally everyone in the nation knew that Clinton was a serial adulterer, rapist and sexual predator who abused his office (along with lots of payoff money) to satisfy his sexual urges. One wag stated humorously that it would have been easier to count the women in Little Rock, Arkansas when he was that state’s Governor and in Washington, D.C. whom Clinton had not slept with than those he had.

I believe the Republicans who voted to acquit this man with zero morals had two reasons. They believed it would tear the country apart for what most of them believed was not a serious crime. (Boys will be boys, after all.) And the ones who voted to acquit were likely adulterers who had also abused their offices to get women into their beds. (The same motivations are why we will probably never have strong and effective drunk driving laws – because so many state lawmakers are alcoholics.)

The bottom line is that the Framers wanted to make it very difficult – actually, almost impossible – to remove a president from office. I mentioned above that if Democrats controlled both chambers of Congress, the president would “probably” been found guilty. It’s all about the numbers. It would take two-thirds of Senators (67 of 100) to find him guilty. So the Democrats would have to hold 67 seats (also almost impossible) or convince enough Republicans to vote with them. This would only happen if the president had committed a crime so horrendous and so easy to prove that they would be forced by their consciences or their constituents to vote to remove a president of their own party from office.

So why would the men who wrote the Constitution make it possible – however improbable – to remove a president from office? Keep in mind that there have only been three presidential impeachments in 244 years, and none of them has been found guilty. (Nixon resigned to avoid impeachment and removal from office.) I believe it was because they envisioned a time when a president was so terrible (Obama comes to mind) that a mechanism for removal would be required. These were wise men, some of the wisest our nation has ever been blessed with.

Nancy Pelosi has stated that, even if Trump is acquitted, he will be “Impeached forever! It will be a stain on his character and his presidency,” quoth she. These sentiments have been echoed by numerous clueless Democrat leaders and pundits. (See my last article, “Democrat Pornography.”)

I have news for you, Ms. Pelosi. By conspiring to impeach the president, even though you knew for certain he would be acquitted of all charges, you have:

HOW DOES IMPEACHMENT WORK?

Impeachment is very similar to an indictment from a grand jury:

A SHORT HISTORY OF IMPEACHMENT

Here’s a brief history of impeachment in the U.S. Impeachment proceedings have only been initiated against four presidents: Andrew Johnson, Richard Nixon, Bill Clinton, and Donald Trump. Nixon resigned before he could actually be impeached. Three presidents had Articles of Impeachment sent from the House to the Senate. All were acquitted, assuming the likelihood of this outcome for Trump. Most impeachments were against 59 federal judges. Only eight were found guilty.

What can we learn from these facts? There is no real appetite for impeachment among legislators, except for the mentally deficient Democrats afflicted with Trump Derangement Syndrome, and the other Democrats who must obey them or be punished. There’s a much easier way to get rid of a president; it’s called an election. Why get half the nation mad at you for impeaching the person they elected when you have to be re-elected every two or six years.

Judges have life tenure, so the only way to get rid of them is to shoot them (which is frowned on by law enforcement) or impeach them. The public doesn’t really care a lot about judges, particularly corrupt ones. To my knowledge, not one political hack has ever lost an election because he or she voted to impeach a judge.

THE DESPERATION OF THE DEMS

The only reason the Democrats were stupid enough to impeach Donald Trump is that they are desperate to win the White House, and hoped a trial would damage him in the upcoming election. None of the losers currently running for their nomination has a prayer of beating Trump – not “front-runner” Bumbling Joe Biden; not Liberal Mike Bloomberg, who despite spending more on ads than all the others combined trails most of them; not Lying Liz Warren; and certainly not the homosexual Mayor Pete who claims to be a Christian. If I were a Democrat I would refuse the nomination. Which of them is enough of a masochist to voluntarily be crushed by Trump, and then cast into a dumpster, dazed and bleeding?

My prediction that President Trump will be fully exonerated of all charges will be proven correct in the next few days. The “prosecution” (the hateful House hypocrites who presented their ludicrous “case” against the president) was allowed 24 hours to present their flimsy evidence – none of which proved that any crime had been committed. They used almost every minute allowed. Since they only had two Articles, they had to repeat themselves over and over. It was more of a filibuster than a presentation. This shows how desperate they are. The president’s lawyers have stated they will use little of the time they have been allotted, making it clear that they have great confidence in their facts and the persuasiveness of their arguments.

The Democrat’s final reckless accusation comes as it becomes clear that they don’t have a chance of persuading even one Republican to vote Guilty. They have taken to calling a probable acquittal a “cover-up.” Imagine any professional prosecutor frantically claiming in the midst of a trial that the jury will be guilty of a “cover-up if it doesn’t vote to convict. Way to win friends and influence Republicans to vote your way, Nancy.

The vast majority of indictments never go to trial, much less result in convictions. So being indicted (or impeached) doesn’t “stain the character” of the accused. The public doesn’t remember the accusation. The “Not Guilty” verdict is what goes down in history. Sorry, Nancy.

Trump’s impeachment trial and exoneration will become a badge of honor that will win him the 2020 election, and place him in that small group of truly great presidents our nation has enjoyed. To be impeached by a desperate bunch of lying hypocrites will not stain the president in any way. To the contrary, false and flimsy accusations by losers despairing of winning their elections just make the president stronger and more respected in the nation’s eyes.

Democrat Schiff’s Lie Angered Every Republican, Making it Highly Unlikely that Any Will Vote with Him
https://www.nytimes.com/live/2020/impeachment-trial-live-01-24

Trump's Exoneration Is Inevitable, but His Impeachment Will Be a Stain on His Record Forever
https://www.newsweek.com/donald-trump-acquittal-inevitable-impeachment-trial-laurence-tribe-says-1483255