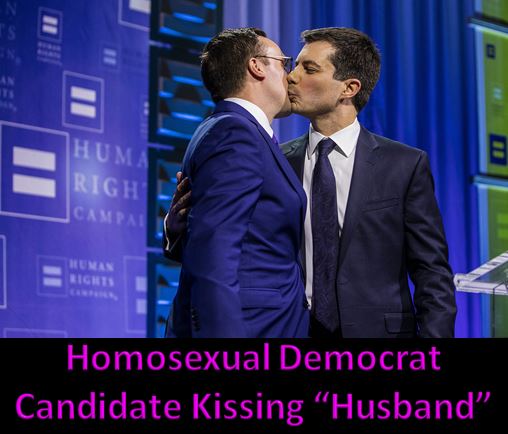 Can you imagine this in the White House? The very thought is repugnant. Pete Buttigieg, currently at the bottom of the top five Democrat candidates for president, is “married” to another homosexual. They’re planning on starting a family – in the White House.

Buttigieg has claimed that, if elected, he would not be the first homosexual president. He hints that James Buchanan and Abraham Lincoln were also perverts. That is as false as it is stupid. In the times of Buchanan and Lincoln it would have been impossible for two such public men to have kept such a secret. But it’s not surprising that “Mayor Pete” would claim such a thing. It’s common for people to excuse their sin by claiming that someone famous or beloved shared their sin.

I continue to be mystified by the fact that the media is so silent about Pete’s sinful lifestyle that many are not even aware that he is a homosexual. As I said in my article, “Why Isn't Anyone Talking about the Pink Elephant in the Room?”…

“When John F. Kennedy ran for president, the news media always preceded his name with ‘the first Catholic US presidential candidate.’ When Obama first ran, we were always breathlessly reminded that, if elected, he would be ‘the first black president.’ The same was true with Hillary and all the excitement about her possibly becoming ‘the first female president.’”

Buttigieg will never become president. There are many reasons why this is so, beyond the obvious - that he’s a homosexual. These include…

*** “Mayor Pete,” as he likes to brand himself, is an atrocious mayor. He claims to have “revived” South Bend, Indiana where he is the mayor. But many in South Bend disagree wholeheartedly. As one of his constituents, Shawn White asked, “How are you gonna run the whole country if you can’t get your city right first?” White and other residents were interviewed for the article below, “Pete Buttigieg is a bad mayor, so how could he be a good president?” From rising crime, to unchecked racism in his police force, to causing asbestos contamination, to huge failed city projects he initiated, Buttigieg is anything but a popular mayor.

His constituents are particularly upset about him running around the country campaigning for president on their dime, while ignoring his duties as mayor and lying about the huge problems in South Bend. At a recent town hall concerning racism in his police department, these exchanges were caught on video:

A presidential candidate telling a group of Blacks that he doesn’t care about their vote? Add stupid to his list of disqualifying factors.

*** Buttigieg claims to be a Christian, while living a lifestyle completely antithetical to the commands of the Bible. The fact that he has sex with another man (even though they claim to be married) condemns him according to the Word of God. The Bible is clear that God forbids such sin in I Corinthians 6:9-10: “Do you not know that the unrighteous will not inherit the kingdom of God? Do not be deceived: neither the sexually immoral, nor idolaters, nor adulterers, nor men who practice homosexuality, nor thieves, nor the greedy, nor drunkards, nor revilers, nor swindlers will inherit the kingdom of God.” Many similar scriptures can be found in the article, “Is Homosexuality a Sin?” linked below.

He also tries to justify abortion by using false claims about scripture. “Pro-life people hold everybody in line with this one piece of doctrine about abortion, which is obviously a tough issue for a lot of people to think through morally. Then again, there’s a lot of parts of the Bible that talk about how life begins with breath. Even that is something that we can interpret differently.”

Make note that while claiming “there’s a lot of parts of the Bible…” he gives not one biblical reference. The fact is that there are no “parts of scripture” that say what he says. Genesis 2:7 does say, “Then the Lord God formed the man out of the dust of the ground and blew into his nostrils the breath of life, and the man became a living being.” If that verse is the “lot of parts of the Bible” he’s referencing, Buttigieg needs to understand that there’s a big difference between the creation of the first man and the fact that babies are human from conception, not after they take their first breath.

It is frightening how many Christians believe he is a Christian. They’re obviously people who don’t read and study the Bible. But this is also a sad commentary on how the church has allowed the world’s lust for “tolerance” of sin to invade our congregations. Many Christians, including some pastors, are so afraid of being called “intolerant” that they fail to preach the pure Word, and sometimes even go along to get along. Trust me on this: Jesus is not tolerant of people using His Word to call darkness light. Those who do so, like “Mayor Pete”, will pay an enormous price for their deceitful words.

*** The main reason we will never have a homosexual is international relations. Homosexuality is illegal in almost half the nations of the world. We’re not just talking about Muslim nations. Many Asian countries, almost all African nations, and five European governments ban homosexuality. In a number of nations not only is homosexuality illegal – it is punishable by death. Just think what this would do to US diplomacy.

Not only would most of these governments refuse to negotiate with a homosexual president. He would not be allowed to even enter many of them. What is worse, these nations would look down on the United States for being foolish enough to put a pair of homosexuals in the Nation’s House. We lost tremendous respect when we elected Socialist Obama as president. Imagine what this would do to our standing in the community of nations.

Sadly, our nation has fallen further and further morally over the last five decades. The fact that the Democrats would be so insensitive to the will of the people and so ignorant of our Christian heritage that they would even consider a candidate like Buttigieg is shocking. As the old saying goes, “If our Founding Fathers were alive today, they would turn over in their graves.

Pete Buttigieg is a Bad Mayor, So How Could he be a Good President?

Buttigieg’s Bible is Missing a Lot of Pages

What Does the Bible Say about Homosexuality?

Is Homosexuality a Sin?