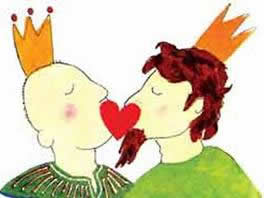 Last Wednesday night during the Democrat Party debate, John Edwards effectively talked his way out of any chance of being his party's nominee. When he was asked a question about a perverted book, "King and King," that parents complained about being read to their second-grade children, Edwards said, "I want my children to be able to make that decision on behalf of themselves, and I want them to be exposed to all the information, even in - did you say second grade?" Yes, you idiot!

I saw Edwards' lips moving, but I couldn't believe the man would say such a stupid thing on national television. Second-grade children can't process that kind of information and "make that decision...themselves." That kind of talk might go down well with die-hard Democrats, but Edwards destroyed any chance he might have had in the national election with those words. His Party will would be stupid to nominate someone they know can't win the general election.

"King and King" was published by Tricycle Press in 2002. Since then it has made its evil way into hundreds of elementary school libraries and thousands of classrooms. It is a fairy tale (no pun intended) about a prince who rejects princess after princess before finally settling on another prince to "marry". The children's picture book ends with a picture of the two men "marrying" and kissing one another on the mouth. Just what American parents want their seven-year-olds to see.

Incidentally, the book, which was written by two Dutch women, has sold about 15,000 copies in the United States since it was translated into English in 2002. That's not a lot of books. Obviously the general public is not interested. So who has bought the few copies which have been sold? Just as obviously (since we continue to hear complaints about schools exposing children to it), it is mainly being purchased by schools.

According to the American Library Association, 'King and King' has been ranked in the top ten of books Americans requested to be removed from libraries. They have good reason. The book promotes a lifestyle which most Americans (and everyone who believes the Bible) see as abhorrent and disgusting. Homosexuals and lesbians make up far less than one per cent of the population. Yet, though their numbers are small, they have used militancy and intimidation to force schools and libraries to promote their perversion.

Why is it that schools and libraries feel they know so much better about what our children should be taught than we do? As we discuss this issue, the State of California is considering introducing school textbooks highlighting the role of homosexuals in its history.

America's parents need to realize that homosexual activists are very serious about taking over our schools and brainwashing our children. They want to indoctrinate our kids with the lie that homosexuality is normal and healthy, and that anyone (including their parents) who believes differently is a homophobic bigot. If you want to get scared into action, check out the website of the Gay Lesbian Straight Education Network (see LINK below). They conduct seminars promoting the teaching of homosexuality to children as young as kindergarten age.

Of course, the National Education Association (the national liberal teacher's union) and liberal politicians like Edwards also support this kind of indoctrination. (By the way, the other front-runners in the Democrat race, Hillary Clinton and Barrack Obama, also supported the use of the book in grade schools. They just weren't as dumb in their choice of words as Edwards.) That's why books like "King and King" are available in elementary schools across America - most likely in your child's school.

According to an Associated Press report, Michael Hartsell of Wilmington, North Carolina, was flabbergasted when his little girl brought the book home from the library at Freeman Elementary School. He says his child is "not old enough to understand something like that," especially when the book is clearly promoting something that goes against his and his wife's beliefs. Hartsell's daughter was in the first grade when she received the book.

Parents, no one cares about your children the way you do. You cannot allow people who do not share your values to choose the books your children are exposed to. Just like television, books have a powerful impact on young minds. The homosexual activists know this, and they are exploiting it. You need to get involved in determining the books to which your children are exposed. Find out who chooses the books for the school library and for classroom use. Visit your school (take some other parents with you) and ask how the books are selected. If "King and King" is in the library, ask who made that decision.

The question asked of Edwards, Clinton and Obama was prompted by a lawsuit brought by parents Rob and Robin Wirthlin and David and Tonia Parker against their town and School Superintendent. They had the courage to do something besides just complaining. Most Americans believe as they do that the State has no right to attempt to repudiate the values they teach their children by brainwashing them with filth disguised as sex education. But few Americans are willing to do anything more than talk about it to one another.

The Wirthlins and the Parkers sued the town of Lexington, a wealthy suburb about 12 miles west of Boston. In addition, they named Lexington Superintendent of Schools Paul Ash and several other school and town officials in their lawsuit. Good for them!

Homosexual activists have long used the courts to gain "rights" dreamt up by out-of-control judges and justices who insist on legislating from the bench. These imagined "rights" exist nowhere in the Constitution. Why shouldn't people who believe in the values upon which this nation was founded use the courts to protect real rights based on the Constitution and codified by law?

In this case, the Wirthlins and the Parkers charge that the school broke a 1996 Massachusetts law requiring that parents be notified of sex-education lessons. They also accuse the town and school officials of violating the Massachusetts civil rights code.

The suit began when Robin Wirthlin complained to the school's principal after her 7-year-old son told her about the reading of the book to his class of about twenty mostly seven-year-olds. Since Lexington is in the Socialist State of Massachusetts, it should come as no surprise that the principal ignored her complaint.

The Superintendent of Schools, dreamed up a novel defense of the town's actions. He claimed that this was not about sex education at all. Ash said, "I see this as a civil-rights issue. People who are gay have a right to be treated equally." Isn't that sweet? Ash is not a loose cannon school superintendent who brainwashes young children too young to even be thinking about sex. He is the champion of the poor, down-trodden homosexuals, who interrupt church services by screaming obscenities if they disagree with a church's (and the Bible's) teaching.

(For instance, a common tactic of the homosexual activist group, Act Up, is to send large groups of homosexuals to churches where the pastor teaches what the Bible has to say about homosexual sin, in order to disrupt the services and intimidate the ministers by shouting them down. The group describes itself on one of its websites as "an activist group, a lobby and a militant group.")

After being ignored by the principal and the town, the Wirthlins were joined by another family whose child was exposed to the homosexual propaganda. David Parker had already been in conflict with the town since his son, then five, brought home a "diversity bag" that included the book "Who's in a Family." The book was a homosexual propaganda intended to make children believe that homosexual "marriages" were just as normal as heterosexual ones.

In an online chat room on this subject, I came across this anonymous comment that says it well: "Kids need to be kids as long as possible, to give them time to mature emotionally. Then they will be better equipped to deal with whatever the world eventually places in their path."

These parents had every right to protect their children from attacks on the values and religious education they gave them at home and in church. The town and the school had no right to undermine those values, in essence teaching the children that their parents were stupid and intolerant.

I'm proud that these parents stood up for their rights. I only wish more Americans would stand up and be counted. Unfortunately, most are willing to sit back and let others do the fighting for them.

According to Bob Knight of the Culture and Family Institute (see LINK below), "This should be a wakeup call to parents all across America who think 'It can't happen in my school.' Well it can - and it can happen in very subtle ways, like books being introduced into the school library without parents or even teachers knowing they're there and kids stumbling upon them."

Whoever the Democrats nominate will be someone who believes that this filth should be forced on our children. That alone should be reason enough for anyone who believes in the Bible and supports family values to vote for a Republican or for any third-party candidate who might emerge that supports their values.