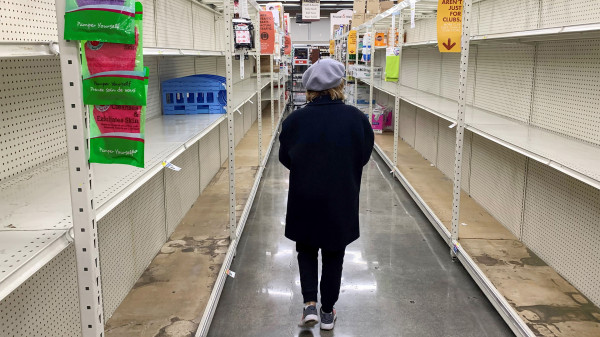 From now on I will call it what it is: The China Virus. Not COVID-19 or any of the other combinations of letters and numbers that have been used to disguise the fact that China created this virus, and then unleashed it on the world. Whether the release was accidental (which is likely the case) or deliberate (a possibility, but unlikely), the one fact that is undisputed is that it is a dangerous virus created by China in their highest level Bio-Warfare Laboratory in Wuhan, China.

This is a follow-up to my article published last week, "Why All the Fear About the Cononavirus?" I recommend that you read that before this article. I will make certain statements today but will not back them up since they were backed up last week. Today I want to give you an update on the Virus, and clear up some of the myths and lies that have caused people to panic and strip store shelves of toilet paper, water, and food staples.

First, while I do not want to downplay the significance of the spread of the China Virus, I continue to believe that the Johns Hopkins MD quoted last week in a March 8 statement, that “Influenza (the flu) and COVID-19, the illness caused by the new Coronavirus, are both infectious respiratory illnesses. Although the symptoms of COVID-19 and the flu can look similar, the two illnesses are caused by different viruses. As of today, the flu is showing much more of an impact on Americans than COVID-19.”

Of course she was talking about the relative medical dangers of the two viruses. The disruption to our nation and the huge financial costs caused by unnecessary panic are obviously greater than that caused by the flu. This is not helped by the nation’s chief spokesman on the China Virus – Dr. Anthony Fauci – using scare tactics on national television this morning. He stated that the Virus kills at a rate ten times that of the flu.

The first reason that was wrong is that the death rate for both is extremely low. For instance, in the past the death rate from the flu has been .5% (one half of 1%). He claimed that in this flu season it is .1%, and that the rate for the Virus is 1%. That is a very small difference, but stating that it is TEN TIMES greater makes it sound much worse than it is.

The second reason that his statement was irresponsible is that no one knows – with even a slight degree of accuracy – the death rate from the China Virus. At one point the government told us that it was 6%. That was based on early numbers from China which were later found to be inaccurate. Then they said it was 3.4%. The data they used to arrive at this percentage were accurate, but the logic was faulty. The only counted as “cases” people who were hospitalized – not the number of confirmed cases nationwide. Well, of course people who are ill enough to be hospitalized are far more likely to die than people with mild symptoms in their homes. Now they’re saying the death rate is 1%.

The point is that no one knows, no can know currently, and in fact we will probably never know the true death rate – or the infection rate, or that matter. The only way we could know that would be to test all 327.2 Million people in the U.S. We can’t even get near that number to fill out a census form, much less take a medical test.

The fact is that the death rate from the Chinese Virus is very likely to decrease as time goes on. This is not because the actual percentages of confirmed infections compared to deaths will change. It is because the majority of people who contract the Virus will never know they had it. Most heal spontaneously in about two weeks – the period of time people with confirmed infections are quarantined. Such people cannot be counted in the mortality rate if it cannot be known that they had the Virus.

Last week I included this table in my article:

Now look at the screenshot below from a briefing by NY Governor Andrew Cuomo: 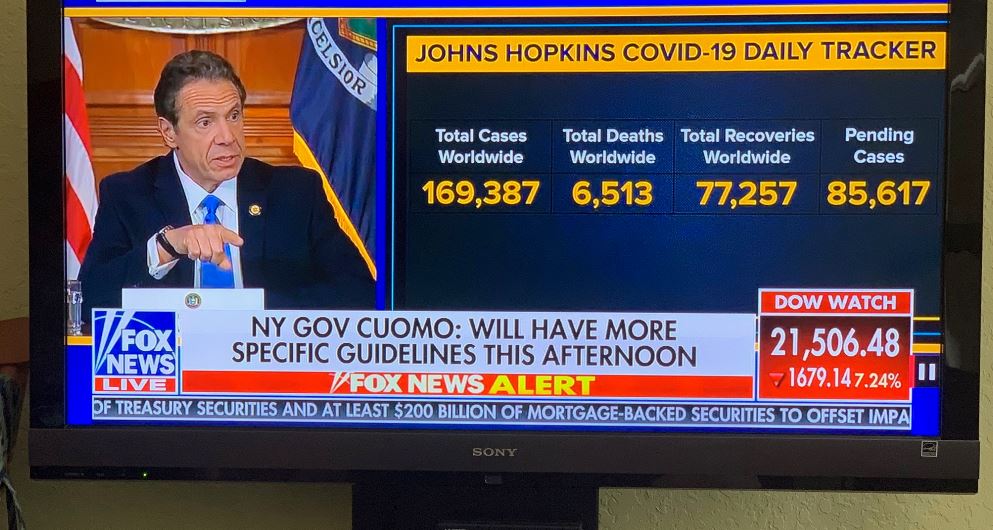 Of the known 169,387 cases worldwide 77,257 – almost half – are already known to have recovered. The other half (85,617) are “Pending Cases,” meaning their outcome is unknown at this point. Some of them will undoubtedly die. But based on our experience so far, the vast number of those will recover.

Eight days ago in my previous article I published the following table concerning Flu vs the China Virus. Let’s update this, as well:

What can we learn from the progression of the two illnesses? The Chinese Virus is spreading more quickly than the flu. That is to be expected, since the flu season is almost over. But the number of deaths as a percentage of new reported cases is almost identical – 50% for the flu, and 55% for the Chinese Virus.

So why has the CDC (US Centers for Disease Control) issued such frightening (and frankly ridiculous) projections as this:

“Between 160 million and 214 million people in the United States could be infected over the course of the epidemic, according to a projection that encompasses the range of the four scenarios. That could last months or even over a year, with infections concentrated in shorter periods, staggered across time in different communities, experts said. As many as 200,000 to 1.7 million people could die.”

They’re saying that between half and two thirds of US citizens could be infected before this is over. That’s as many as 5% of our entire population could die. And that this emergency could last as much as a year. Fortunately these are “projections,” meaning they have no hard data to back them up.

There are some bright spots in the midst of all of the gloom and doom on the news. First, small children seem to be immune. Not one child worldwide has dies of the Chinese Virus, and only one in the age group of 10 to 19 has died. No one seems to know why, but it is certainly wonderful compared with the fact that there is a very high mortality rate among babies and small children with the common flu.

Another is that the number of cases reported in China has only increased by 329, a tiny percentage of .4%. Remember that in mid-January 99% of all Chinese Virus illnesses and deaths were in China. Last week 74% were in China. Today, 8 days later, only 48% are in China.

“Why is that good news?” you may ask. “They started it. Why is it good that the rest of the world is suffering more while they suffer less?” Several reasons. It indicates that the Virus has peaked in China in about two months, so the dreadful projections of the CDC for the US are much less likely to be accurate. It also means that the measures taken by China and adopted by other nations are working. And it likely means that the early guesses about the rate of communicability may have been exaggerated. If they had been correct, the number of cases in China would probably have doubled by now.

The following is anecdotal, but true. We can’t read too much into this, but it is certainly encouraging. I attended CPAC (a Conservative gathering) in Washington, DC, two and a half weeks ago. I was in a room with President Trump in an intimate setting with about 10,000 other Conservatives packed together like sardines. This was in the largest event venue in the area, The Gaylord National Hotel. You could not walk down any hallway with being shoulder to shoulder with other people, having constant body contact.

A few days after the conference all attendees were notified that one person who attended became symptomatic and tested positive for the Virus. That means that in all likelihood he had the virus while he was at the conference. Most people are sick and can infect others for at least several days before they have any indication of being infected.

CPAC has been kind enough to keep us informed of the patient’s progress. He is now almost fully recovered, with no long-term effects. More important, not one other person out of the 10,000 has reported any problem. This doesn’t sound like a raging pandemic to me.

In fact, last week, when there were 110,000 cases worldwide, the CDC stated clearly that this was not a pandemic. But the very next day, after a few thousand more cases had been reported, they suddenly reversed course and called it a pandemic. This was almost certainly a political move to:

Make it easier for Congress to allocate more money to fight the Virus.Make it harder for the President to win his re-election. It meant that he had to cancel his most effective campaign method, rallies with tens of thousands of people. And it gave the Democrats an opportunity to claim that he has not responded to the Virus appropriately.Let’s look at the president’s response. It started long before the first Chinese Virus case was revealed, when he recognized Jerusalem as the capital of Israel. No other country has had the courage to do so. Israel is the only nation in the world that ha had other nations tell them where they could have their capital. Many presidents before Trump had promised to do what he did – but he was the only one who had the guts to do it.

What does that have to do with the Chinese Virus? God told Israel in Genesis 12:3 and other verses, “I will bless those who bless you, and whoever curses you I will curse; and all peoples on earth will be blessed through you.” I believe that because we as a nation, through our president, have blessed, protected and supported Israel, God has protected us. We have suffered far less than other nations from the Virus, particularly on a per capita basis.

Of the ten countries that have reported more than 100 confirmed cases of the Wuhan coronavirus each, the United States as of Thursday continues to have the smallest number – by a significant margin – in proportion to its national population.

President Trump also acted decisively in closing our borders to travelers from China and Europe. No one in the Congress or the media was calling for this. He simply assessed the situation and decided that the most effective way he could do his primary job – protecting our nation – was to prevent possible carriers of the Virus from coming to America.

The Democrats called him a racist when he cut off travel from China. The Europeans, our allies, howled in protest when he did the same with them. But he had the courage to listen to advice from some of the best scientists in the world and likely saved thousands of lives.

The final thing he did to protect us was the most important. Do you remember the account in Jonah the third chapter when the prophet told Nineveh that He was going to bring judgement on them? The King proclaimed a fast and God relented.

That’s basically what President Trump did when he proclaimed a National Day of Prayer regarding the Chinese Virus to take place on Sunday, March 15. There has been a general National Day of Prayer every year since Harry Truman. But I can’t remember any president who had the courage to stare down the atheists and the ACLU and proclaim a day of prayer for a specific emergency. I believe the impact of this will be felt for years to come.

If you are afraid, please follow this simple prescription. Read Psalm 91 out loud to yourself, and to your family if possible. Meditate on the powerful promises God gives us. And then trust the Lord your God.

US Has Lowest Per Capita Rate of Chinese Virus Infections

CDC Estimates of US China Virus Cases and Deaths

Don’t Buy the Media Hype Over the China Virus