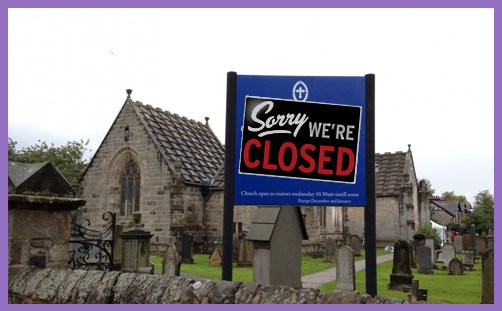 The short answer is "No!" No government has the authority to force a church to close or stop holding services. I am sure that some would argue that in the case of a national emergency our president could order such closures, but they would be on very shaky ground constitutionally. Here in Florida, Governor DeSantis ordered the closing of numerous businesses and events - including the beaches. But he was careful not to include churches or synagogues. The Democrat Governor of Michigan ordered schools and other public venues to be closed without a qualm. But when asked by a reporter why she had not closed houses of worship she answered that she did not have the authority to do so because of "the separation of church and state."

Now if the question is "Should churches suspend services?" my answer would be "Yes."

I was in a church service Sunday before last when the pastor announced, "We will keep having services until they padlock our doors." As more information came out, he wisely reconsidered and this week had services online.

One pastor said, "I will close down our services when the government shuts down the abortion mills." He had a good point. More babies are murdered in their mother's wombs every day than have died in the entire United States of the China Virus in almost three months. But there is no philosophical equivalence here. If the church members demonstrate in front of an abortion clinic they may be beaten up or arrested. But if they meet for church on Sundays, they may kill each other unknowingly if one or more has the Virus without symptoms.

I believe that if every member of any church "vaccinated" themselves against the Chinese Virus by reading and believing Psalm 91, they could meet together and suffer no ill effects. I have exactly zero fear of contracting the Virus because I completely trust the Word of God. But I am not naive enough to believe that every church member of any church has that complete trust, and this that complete protection. I would like to believe that many churches do, but I know that most churches have believers that are very young in the faith. And almost all churches have visitors who are not born again. So (as they say on Shark Tank), for those reasons I am out.

I have pastored in seven churches over the last 45+ years, but I am not an elder or pastor in any church today. Instead, I am an overseer, so I pastor pastors. That means I don't have to make the decisions my pastor has made, but I do counsel other pastors.

Here is what I tell them. The government can't make you stop having services. But I think you should. I am a Dean and Professor at a local Bible College where my fellow Professor and I have voluntarily taken our classes online. Here is my reasoning. Our president has requested - not ordered - Americans not to congregate in groups of more than ten. I don't have to comply with his suggestion. But I can see that he has worked hard to do everything he can - both physically and spiritually - to protect our nation. This is a short quote from my article last week:

The president’s response to the Chinese Virus started long before the first Virus case was revealed. That was when he recognized Jerusalem as the capital of Israel. No other country has had the courage to do this. Israel is the only nation in the world that has had other nations tell them where they could have their capital. Many presidents before Trump had promised to do what he did – but he was the only one who had the guts to do it. What does that have to do with the Chinese Virus? God told Israel in Genesis 12:3 and other verses, “I will bless those who bless you, and whoever curses you I will curse; and all peoples on earth will be blessed through you.” I believe that because we as a nation, through our president, have blessed, protected and supported Israel, God has protected us. We have suffered far less than other nations from the Virus, particularly on a per capita basis.Of the ten countries that have reported more than 100 confirmed cases of the Wuhan coronavirus each, the United States as of Thursday continues to have the smallest number – by a significant margin – in proportion to its national population.

President Trump also acted decisively in closing our borders to travelers from China and Europe. No one in Congress or the media was calling for this. He simply assessed the situation and decided that the most effective way he could do his primary job – protecting our nation – was to prevent possible carriers of the Virus from coming to America. The Democrats called him a racist when he cut off travel from China. The Europeans, our allies, howled in protest when he did the same with them. But he had the courage to listen to advice from some of the best scientists in the world and likely saved thousands of lives.

The final thing he did to protect us was the most important. Do you remember the account in Jonah in the third chapter when the prophet told Nineveh that He was going to bring judgment on them? The King proclaimed a fast and God relented. That’s basically what President Trump did when he proclaimed a National Day of Prayer regarding the Chinese Virus to take place on Sunday, March 15. There has been a general National Day of Prayer every year since Harry Truman. But I can’t remember any president who had the courage to stare down the atheists and the ACLU and proclaim a day of prayer for a specific emergency. I believe the impact of this will be felt for years to come.

Some Churches Refuse to Close
https://reason.com/2020/03/20/these-churches-refuse-to-close-over-covid-19-does-the-constitution-protect-their-right-to-remain-open/

Can the Government Close Churches in Response to and Epidemic?
https://aclj.org/religious-liberty/can-the-government-close-churches-in-response-to-an-epidemic

The Establishment Clause of the Constitution
https://www.mtsu.edu/first-amendment/article/885/establishment-clause-separation-of-church-and-state