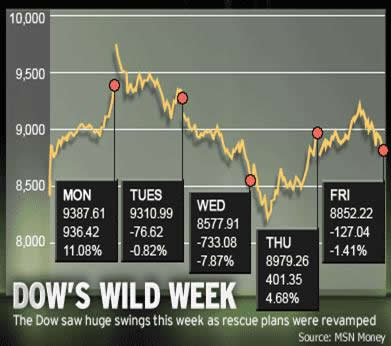 Some of you may know that I have made my living in the stock market (both as a Stock Brokerage Branch Manager and National Vice-President, and as a private investor) for most of my life. For the last two years I have been the CEO of www.iDayo.com, a website that has had a phenomenal record of helping people succeed in the stock market for the last ten years. It has never had a losing year, even during the Bear Market from 2000 to 2002.

I have written articles for many financial sites, but have never written about the markets on this site before. I felt that, since the majority of our readers own stock (either directly, or through mutual funds and retirement accounts), some perspective and encouragement was in order. After this week's positive close, with the biggest gains in a single week for the last five years, we may well be in for better days.

Before we discuss the future, let's look at the recent past. For several weeks prior to the big drops of the last month, the iDayo software had been indicating negative sentiment on the part of institutional investors. Then, almost a week before the fateful meetings between government and financial industry leaders (and the first huge market drop) it clearly told us, "Stop buying!"

Since then, it has not reversed itself. Basically, the system has not selected stocks for the last several weeks because the conditions that cause it to do so (significant accumulation of individual stocks by key institutions, along with price appreciation) have not been triggered.

The last three weeks have closed in the red, and during that time we experienced six days in which the Dow lost 4% or more. Fortunately we also had two days in which it gained between 3% and 4%; two days with gains of almost 5%; and of course Monday's phenomenal 11%+ gain (which was almost 30% larger than the worst down day).

On Monday, when the average gain of the key indices was an incredible 11.5%, I received an email from an iDayo Subscriber who wondered why the system had not selected stocks on Monday morning, since there were such huge gains that day. (I imagine that on Tuesday he was glad there had been no selections.) Monday was the biggest one day percentage gainer in the history of the markets. But, as we know (and as we all observed this week), one day does not a trend make.

Monday evening, based on 37 years of experience (including going through some of the century's most serious crashes, corrections and bear markets), I gave several friends who called looking for direction, my probable scenario for this week. I repeated my thoughts on our weekly Subscriber Webinar. I told them that, although many were hoping for a follow through day on Tuesday, I was sure that after such huge gains on Monday, we would see profit taking for the next day or two. I also predicted that we would end the week in positive territory, IF we had at least one more strong, profitable day and one day that was at least flat. If that happened, we could expect a good week next week, and possibly look back on this week as the turning point in this market.

Monday was huge, with the Dow gaining almost 1,000 points. Tuesday was our flat day. It started strong, deteriorated rapidly, and then came back strongly at the end of the day to leave the broad market indices at about 0.5% down (The Nasdaq Composite Index didn't fare as well on Tuesday, but on Monday it beat the Dow and the S&P 500, and the Nasdaq 100 gained over 12.5%.) Wednesday was brutal, with the markets giving back almost three quarters of Monday's gains. Thursday was great, with the averages gaining almost 5%. Friday we were down across the board about 1%.

Now, I'm not claiming to be some sort of prophet. My predictions were simply based on observing market actions for close to four decades, and studying market events that occurred long before I was born. Although there are different reasons for market downturns, they tend to resolve themselves in fairly predictable ways.

So I will predict that if we get my expected up week next week, although we will see churning, choppy markets for several weeks or months, we will start to see a gradual rise that will help us end the year with the indices well up from the current levels. By the way, the important news from this week is not the 11.5% gain on Monday. The key fact that could well turn this market around is that, after three negative weeks which culminated in an unbelievable eight consecutive down days, the Dow closed this week not just in positive territory (which would have been good), but with a whopping 4.7% gain from last Friday's close (which was fantastic). That is the largest one week gain in the last five and a half years.

Let's examine some market history regarding strong downturns. In the 70's we had a serious crash over a period of two years that seemed to investors at the time like the end of the world. But in just about the same time period, the indices were back where they had been, and seven years later they had doubled. In the Crash of 1987, the Dow lost almost 1,000 points in less than three months, but gained almost all of them back in a year and a half. The Bear Market that started in 2000 saw the S&P 500 lose 40% in three years. A few years later it was back where it had been. In all three of these instances, smart people made billions by buying stocks at discount prices. Warren Buffet started doing that this week, according to an article he wrote for the Wall Street Journal.

Some people have said to us, "I thought iDayo made money in all types of markets." Yes, iDayo picks stocks in all types of markets. But it does not pick stocks every week in every type of market. If you peruse the ten year track record, you will see that there have been many times that the system stood aside in extreme market conditions (sometimes for weeks at a time), and we were all the better for it. This has been one of those times. It would have been suicidal to buy stocks the last few weeks.

iDayo's main value to investors is its defensiveness. I was apologetic about this year's returns when a gentleman called me about iDayo early last week. He replied, "I've lost so much money with 'professional' money managers this week that I'd say your system was great if it just broke even this year!" In fact, with the benchmark S&P 500 down 20.4%, the closed iDayo positions are up 7.1%. (Both percentages are Year to Date, and have been annualized.)

It looks like things are starting to turn. We will start buying stock again very soon, and we'll be buying them at bargain prices. There will be huge profits made by investors of all types when the markets start back up. But, as I mentioned earlier, it will be choppy, and many people will not get back in until a strong uptrend is in place. By that time they will have missed much of the profits others will make in the recovery.

People who have never bought a stock in their lives have been calling me and saying, "I want to get in on the market now. I know people who made a lot of money after the last crash, and I want to be in on it this time." Many people did make money then, using a "shotgun" approach (in other words, buying any stock that looked good to them). They would have done much better, however, using iDayo's "rifle," which targets the best stocks available. And remember, the best time to invest in any system is following a market downturn.

I know most of you have taken some big hits, especially those of you who have long term stock holdings which are down 40% to 50% over the last twelve months. Many retirement accounts are in the pits. But take heart. If you look at a hundred year chart of the Dow, you will see that there has always been a strong overall up trend. Even the three events I mentioned above appear to be mere blips in the upward progress when you look at the big picture.

A word of caution. Don't jump in right away. If this week does not close up, we will probably have several more weeks of choppy market action. But if this week closes on a positive note, we should be hearing sweet music in the weeks and months to come.