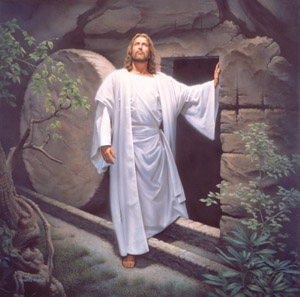 As I write this early on Easter Sunday morning, dawn has not yet broken on the most joyous day of the year. Some who do not know Him wonder why Christians are so happy on Easter, since it commemorates the death of our Lord. They don’t understand. Good Friday marks the crucifixion of Jesus for the sins of the world. Easter Sunday celebrates his victory over death, hell and the grave. It is a day of joy even greater than that of His birth. It is the day He arose!

Normally churches around the world would be filled with the year’s largest crowds of His people celebrating together. The pastors would be crying out, “He is risen!” And the saints would be answering with great joy, “He is risen indeed!” But a plague has descended on our land. Most people in our nation will not be allowed to enter their churches on this Easter. And this has made many sad.

Listen carefully. Gathering together as the Body of Christ on any day of the year is a great privilege and joy – one which too few Christians take advantage of regularly. The Bible says, “Let us not neglect our meeting together, as some people do, but encourage one another, especially now that the day of his return is drawing near." Hebrews 10:25, NLT.

I would love to assemble together physically with my brothers and sisters today, hug them, and celebrate our Risen Christ with them. But we shouldn’t forget that there have been many times in our history when this has not been possible. Wars, dangerous weather, and other plagues are just a few of the barriers that have kept the church from assembling on the day when they most wanted to join together.

Those who truly understood the meaning of the Resurrection did not allow such physical separation to dismay them. And we should not allow it today, for three reasons.

First, He is still our Risen Lord. Nothing can change that fact – for all eternity. He is Triumphant and Victorious! He has defeated death and the grave. His is forever our glorious Champion and Conqueror. How can we be anything but joyous when we remember these truths?

Unfortunately, I sense sadness among some because they look forward to this day of celebrating together. Instead, most are under “house arrest.” No matter the reason for the separation, they feel it deeply – particularly on this day.

So here is the second reason why we cannot allow unhappiness over our current circumstances to steal our joy.

“In Christ Jesus you are all children of God through faith, for all of you who were baptized into Christ have clothed yourselves with Christ. There is neither Jew nor Gentile, neither slave nor free, nor is there male and female, for you are all one in Christ Jesus.” Galatians 3:26-28 NIV.

A friend in Bible College used to ask people, “How are you doing?” Some would answer, “OK, under the circumstances.” He would ask, quite reasonably, “What are you doing down there?” If you are focusing on the current – and temporary – circumstances, why are you down there? Why are you not instead rising above them and standing victorious upon them – as Jesus did?

Whether we are in a church with dozens or thousands of others, or isolated in a house or apartment, there is one thing Satan cannot steal from us. Look at the last four words of the passage above: “…one in Christ Jesus.” Whether believers are across town or across the world from one another physically, we are still one.

This attack from Satan – and never doubt that the China Virus that has impacted the planet came directly from hell at Satan’s order – cannot keep us apart. Just as Jesus rose victorious over death, we – His body on earth - are victorious over every attack of the enemy.

The Prophet Isaiah tells us that no weapon formed against us can prevail. He goes on to say that “This is the heritage of the servants of the Lord.” Isaiah 54:17 NKJV. Heritage means inheritance. The truth that no weapon can defeat us is our promise, birthright, and inheritance. We may have temporary setbacks, such as this virus from China. But this is just a skirmish. The battle belongs to the Lord. He is always victorious!

Finally, in Romans 6:5 God says, “For if we have been united with him in a death like his, we will certainly also be united with him in a resurrection like his.” The worst Satan has to throw at us is death. But as believers we cannot die. Our bodies, the vehicles that carry our spirits here on earth, may die. But our spirits, the real “we” cannot die. We will live together with Christ for eternity.

Now that’s something to shout about!