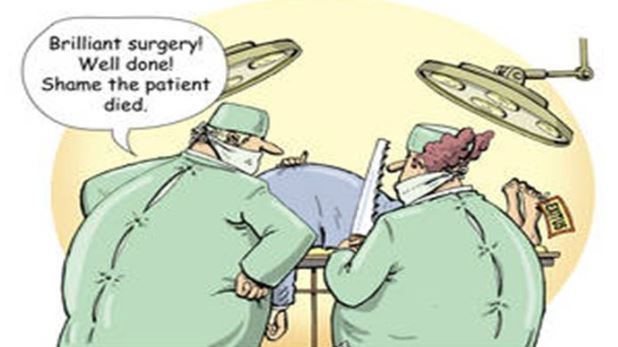 This is not a joke (although it is often used in a joking manner). Doctors have performed surgeries that were considered “successful” – even though the patient died, either on the table or in the Recovery room. This happens when a surgical procedure, such as a heart valve replacement was performed perfectly. But the patient died either from anesthesia difficulties, or because he or she was simply too weak to endure the surgery.

The doctor had the best of intentions. He or she felt the patient was strong enough to have the surgery. And the surgery was needed – sooner rather than later. Yet the patient died.

Many of the people who have provided the “guidance” on preventing the spread of the China Virus also had the best of intentions (although I believe that some of them had other nefarious intentions that had nothing to do with the safety of Americans). However, I believe that when all the statistics are in, we may well find that more people died because of the “guidance” than died from the virus itself. (That is, of course, if the powers that be don’t fake the statistics, changing some and hiding others, as they are doing now.)

For instance, have you heard on the Democrat-controlled media that tens of thousands of people have died as a direct result of the house arrest their state’s governors have placed them under? I doubt you have – this is the kind of story that the Liberal media either completely censors, or mentions in a fleeting manner. Check these facts out…

Roughly 300 million Americans are under some sort of “House Arrest.”

This isolation has caused a host of mental health problems.

People who live alone are impacted more than anyone.

Suicide rates are up, and suicide hotlines are being overwhelmed.

New and worsening depression cases are on the rise.

Alcohol abuse and alcoholism are up.

Anxiety attacks are much more common than when people could socialize.

Millions of Americans have no way to pay their rent or mortgages.

Calls to crisis hotlines have increased by hundreds of percent.

Millions report fear of becoming homeless due to the economic crash.

Many Americans see the draconian measures taken by some governors as unconstitutional, and fear they are a precursor to martial law being imposed.

Massive demonstrations against what many citizens consider violations of their constitutional rights are taking place all over the nation. But you wouldn’t know it if you watch the Liberal media. They either ignore the fact, or they mock them.

Space doesn’t allow deep analysis of all of these negative effects, but we will examine several of the most serious – and deadly – results of the Governors’ stay-at-home orders. We normally place the research links at the end of our articles, but since there are so many we will include them


SUICIDES DUE TO SOCIAL ISOLATION

In a March 27, 2020 report, just one Tennessee county saw more deaths by suicide than all the 94 other counties combined experienced deaths by the Virus. “That number is completely shocking and makes me wonder if what we are doing now is really the best approach,” said Knoxville, Tennessee Mayor Glenn Jacobs. “We have to determine how we can respond to COVID-19 in a way that keeps our economy intact, keeps people employed, and empowers them with a feeling of hope and optimism – not desperation and despair.”

Mental health experts are coming to grips that suicide due to isolation may be more of a risk to some than the China Virus itself. "There are ramifications, sometimes fatal, with events like these that are not just related to getting infected or dying from infection or consequences of infection," said Eric Caine, co-director of the Center for the Study of Prevention of Suicide at the University of Rochester Medical Center. It is important "to honestly and openly consider the  adverse events that occur in the midst of social distancing."

As the total number of 911 calls in Portland, Oregon have decreased by 10% since the declaration of the pandemic, suicide calls have more than doubled to 23%. Emergency service centers and suicide prevention call lines have seen similar increases.

“It’s so scary, it’s almost like...I would rather be dead,” says Danielle Sinay, a writer in New York City with a history of suicidal thoughts, USA Today reports. “I mean, I wouldn’t be, but sometimes I get so scared it feels like that.”

The actual number of suicide that have occurred as a direct result of the Virus won’t be known for some time. And the media, which generally supports the draconian orders of the states, won’t report on the known suicides. But most experts agree that as the economy worsens the nation will lose thousands of people to suicide.

The worst aspect of this is that far too many suicides are murder-suicides. As discussed in the Domestic Violence section of this article, domestic violence – particularly against women and children – is on the rise due to the isolation. Unfortunately, many who decide to kill themselves first murder a family member – sometimes entire families.


More People Died From Suicide Than Coronavirus In Tennessee This Week

‘Isolation is a big trigger.’ Feelings of suicide are amplified amid a pandemic.
https://www.usatoday.com/story/news/nation/2020/03/23/coronavirus-pandemic-isolation-fear-job-loss-triggers-suicide/2871949001/

Police nationwide are reporting lower crime rates as mobility is creased. At the same time, they are seeing historic increases in the number of incidents of domestic violence and murder.

Victims of domestic violence in the past have been able to escape by calling police when their abuser was away from the house. Often they would wait for the abuser to go to work, then they would pack a few belongings and flee to a shelter. Now they are forced to stay in the same small space - 24 hours a day in many cases – with their abuser.

Domestic violence victims feel victimized by their states today. Governors’ Executive orders limit their ability to escape beatings and death at the hands of their abusers. Many abuse shelters are closed due to China Virus fears, and can only provide phone support. While this may be helpful in some cases, it doesn’t allow them to be in a safe place.

Crime rates plummet amid the coronavirus pandemic, but not everyone is safer in their home

An example of a crisis call: “This virus might make my family homeless. My husband’s job might cut hours or close, and I’m disabled. It’s all too much to deal with.”

80% of people calling crisis hotline mention “virus” when they talk about feeling anxious. While callers initially were more concerned about dying from the China Virus, they now realize that their chance of dying from the disease is far less than 1%. Now they are concerned about economics, including job losses, business closings, inability to pay bills, losing their homes, and even not being able to afford food. The top five words used in calls to the crisis hotline are:

Thousands are dying as a direct result of government-ordered isolation. The liberal media don’t report about this, because they generally support Democrat efforts to legalize drugs.

Addiction (particularly to opioids) and alcohol addiction are on the rise among those ordered to stay at home. Boredom and isolation are “the devil's playground” for these people. Instead of going to work, meeting, or therapy, isolated addicts, and alcoholics.  As more people order food delivery, creative drug dealers have been caught delivering drugs in pizza boxes.

"Treatment and recovery may be on hold, but addiction and drug use is not."
~ Brian Corson, founder of MVP Recovery Services

"One of the biggest things substance abuse is triggered by is isolation."
~ Kirsten Freitag Murray, Creative Health Services

"The opioid crisis is still front and center. There are people dying every day."
~ Louis Tovar, President of Kacie's Cause

Child abuse and domestic violence as people will be in restricted locations with abusers.

MENTAL HEALTH ISSUES DUE TO ISOLATION

Crisis call lines are overwhelmed nationwide. Callers have extreme levels of anxiety – more about losing jobs and homes than about getting the China Virus.
https://www.crisistextline.org/data/bobs-notes-on-covid-19-mental-health-data-on-the-pandemic/

The U.S. Shut Down Its Economy. Here’s What Needs to Happen in Order to Restart.
https://www.nytimes.com/2020/03/22/us/politics/coronavirus-economy-shutdown.html

When Civil Authorities Take over, Are You Covered?
https://www.irmi.com/articles/expert-commentary/when-civil-authorities-take-over-are-you-covered

Of course they are! However, what's even more of a lie is the mortality rate being spewed by IGNORANT LIBS! When 7 out of 8 cases of Coronavirus go unreported( the media's own numbers) due to lack of tests available, the mortality rate is skewed by the lack of HONEST DATA. I heard on the radio the other day in a state I was driving through, that 100% of their confirmed cases had been hospitalized. Laughing followed, as ANYONE WITH A BRAIN knows better. Since when did, "since we can't test you, you don't have it" become believable? Only in the ignorant libs' (empty) minds!

Nearly 99% of Minnesota deaths were patients with underlying conditions.
https://www.msn.com/en-us/health/medical/covid-19-nearly-99percent-of-minnesota-deaths-were-patients-with-underlying-conditions/ar-BB12CCVC