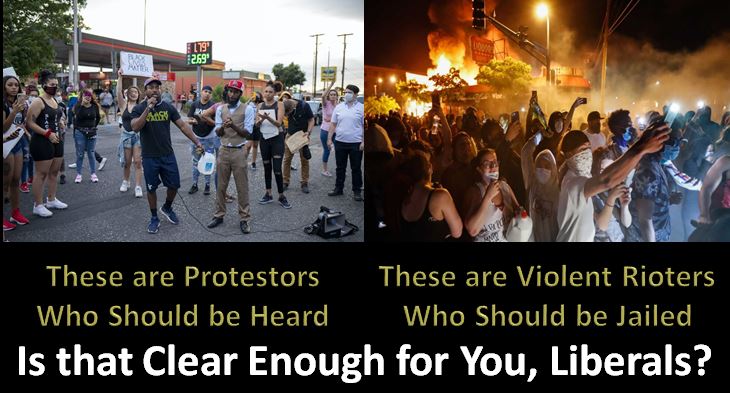 First, get a clue, Mayor Braindead. These aren't protesters. Protesters walk around, wave signs, shout, and make their views known - peacefully. Rioters injure innocent bystanders, kill people, steal, destroy buildings, set fires, blow up cars, destroy minority-owned neighborhood businesses, and attack police - all felonies. As mayor of one of the largest cities in the world you should know this. But you will treat them as innocent protestors, since most of them were stupid enough to vote for you.

Neighborhoods are being destroyed, millions of dollars in damage being done, people being injured and killed by these rioters - but your concern is "social distancing"? Are you insane, or are my lying ears deceiving me? These are not protestors - these are violent rioters. Inciting a riot is in itself a crime. But you are concerned they might sneeze on each other.

How about the almost 6,000 elderly New Yorkers you and your governor condemned to death by using an Executive Order to force nursing homes with healthy populations to take in China Virus infected people. You even told them they weren't allowed to test the new patients, so that they could possibly isolate them from the healthy people. The result was predictable. It was like throwing a burning, gas-soaked rag into a pile of dry leaves. The infection spread like wildfire in these nursing homes. One fourth of all the Virus deaths in the entire State of New York occurred in those nursing homes you turned into death traps. One fourth! The blood of those who died is on your hands, Mayor Grim Reaper.

Florida Governor Ron DeSantis did the opposite of what you did. He issued an Executive Order that no hospital could send a China Virus patient to a nursing home - even if they had no symptoms. As a result of this and other sensible measures, the death rate in Florida is miniscule compared to New York - and Florida has not just a larger elderly population (twice as big), but a larger total population (50% higher) than New York. The population density of the two major cities in each state is quite different, with twice as many New York City residents per square mile as there are in Miami, but the overall population density of both states is about the same.

So what is the major difference between New York and Florida? New York State is run by a publicity-hungry DEMOCRAT Governor, backed by one of the most Liberal DEMOCRAT legislatures of any state. New York City is run by a disgrace of a DEMOCRAT Mayor who orders his city's stores to serve smaller "sugary drinks" and bans plastic straws while his city burns. Florida's Governor is a Christian first, a REPUBLICAN second, and he uses something Cuomo and DiBlasio seem never to have heard of - common sense. He is backed by a REPUBLICAN House and Senate who understand the dangers of the Virus China sent us, but who supported sensible guidelines that have made Florida one of the safest states in the union.

New York has been under Democrat control since 1988 - 38 long, devastating years for the economy, the lifestyle and the safety of New Yorkers. It ranks at the very top of the 50 states in taxation of its citizens, with a Personal Income Tax of 11% on top of the federal income tax. Florida has been under Republican control since 1996. It is almost at the bottom - number 47 - of the 50 states in terms of taxation, with ZERO income tax and 50% lower property taxes. No wonder almost half a million New Yorkers fled their state last year, while a half million people moved to Florida. 67,000 of the New Yorkers moved to Florida (HINT: It wasn't just for the sunny climate).

New York is one of the most anti-cop states in the nation. In a national poll of police officers, New York was determined to be the third worst state in which to work in law enforcement. When the mayor visited a wounded cop at a NYC hospital, several hundred cops turned their backs on him as he walked down the hall. New York is a "Sanctuary State." This means that not only do they break the law by harboring illegal aliens; they also prevent federal agents from safely arresting dangerous felons with federal warrants against them when they're released from city jails. This forces the agents to serve the warrants in neighborhood, endangering the agents and innocent bystanders. New York has protected rapists, murderers and other violent criminals in this way. And since the China Virus is spreading rapidly in South and Central America, the fact that they know the state will protect them from deportation is one of the reasons that New York has one of the highest Virus infection rates.

Florida honors its police and military. In fact twice as many veterans choose to make Florida their home over New York. Police, including local, state and federal office, know that Ron DeSantis has their back. Although it’s a border state with many illegals entering, it fully cooperates with federal authorities whose job it is to ensure the safety of America. Primarily, it is a state run by people with common sense – REPUBLICANS.

The differences are stark. New York is run by DEMOCRATS. It is the highest taxed state in America, and its citizens are among the most highly regulated and bullied by their government. It has been the hardest-hit state by the China Virus, primarily because of the ridiculous, politically-driven, inept and frankly criminal actions of its governor and the mayor of New York City. Florida is run by REPUBLICANS. The Governor cooperated with the state legislature, instead of playing dictator. Together they implemented sensible rules that kept Florida safer than New York. It has a much bigger overall population than New York, and twice the elderly population – the most likely group to contract the China Virus. Yet New York has had 23,282 China Virus deaths compared to Florida’s 2,259. New York’s Virus death rate is TEN TIMES GREATER than that of Florida.

You decide: Would you rather be ruled by Democrats, or governed by Republicans? Think about that when you vote next November.

Best and Worst States to be a Police Officer
https://wallethub.com/edu/best-states-to-be-a-cop/34669/