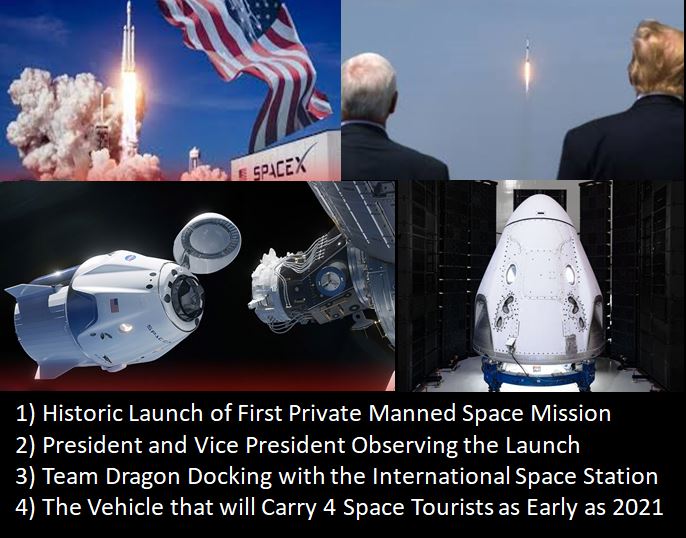 We've had enough bad news in the past few months to last us for years. First, China sent us the gift of a pandemic that has killed over 100,000 Americans. As a result, in just a matter of months the fear and panic induced by the pandemic destroyed all the economic gains President Trump and his team have made since he was elected. We are now officially in the worst recession since the Depression. Then a terrible cop in Minneapolis killed a black man, George Floyd, sparking week-long riots in 30 Democrat-led cities around the nation

Finally, I can report some good news. After 12 years on the sidelines, watching other nations launch space missions, on May 29 the United States completed a successful manned rocket launch from American soil. This is great for several reasons: Why is space exploration so important? God created man with a great curiosity to know and to learn. Men risked their lives crossing oceans, not knowing what they might find. Explorers have braved nature and the elements to discover what was over the next mountain or across the next valley. In our country we pushed West over many years, led by Daniel Boone, Lewis and Clark, Zebulon Pike, Jim Bridger and Kit Carson. Wagon trains of ordinary folks followed the trails they blazed, even though were attacked by Indians, beset by tornados and blizzards, and many died from starvation.

Another reason is that great good has resulted from space exploration. These are just a few of the benefits that have come as a result of our space program…

Many products and ways of using various technologies wouldn’t exist today, or would not be nearly as sophisticated, if not for the space program…  Why would Obama want to kill a program that has created so much good, and was a great source of pride to our nation? He was a globalist who believed that the United States was nothing special, and should just be a part of the great Global World Order. He did everything he could to undermine our status in the world and – in his thinking – “level the playing field.” This was just another example of his philosophy of “redistributing the wealth.” The bottom line is that his actions proved that he was a Socialist who despised America.

One of the first things President Trump did was to rebuild our military, which Obama – as he had promised – had reduced by 50%. Then he quietly went about doing what he does best – he made deals. The reason private companies have joined in the space effort is that their CEO’s know they can trust Trump – something that never could be said about Obama. Trump is making America great again – in space.

The President and Vice President were there when Team Dragon was launched. They have made revitalizing the space program a top priority, including returning humans to the moon, reforming federal regulations to help unleash a new space economy, and establishing the U.S. Space Force, a new military branch dedicated to space.

The historic SpaceX/NASA launch Saturday of the first manned private space vehicle changed the face of space in a way we haven’t seen since the program began. More great scientific discoveries will be made as private enterprise makes profits and invests them in space. Eventually space tourism will be possible. “Delta, I’d like to book a seat on next Thursday’s flight to the moon. Make it First Class.”

One major improvement made by Elon Musk’s SpaceX is the reuse of millions of dollars’ worth of equipment. Government programs have never been very concerned about wasting money, so during NASA launches the different rocket stages were allowed to sink into the ocean. SpaceX, which is responsible to its investors, has designed their rockets so that the stages that are jettisoned during launches can be retrieved and reused.

The public/private partnership that made this possible are a result of Trump realizing that government has its place, as does the private sector. The government has made all the knowledge gained through the NASA efforts available to private companies. It has also made infrastructure and funding available.

The private sector provides what government can never produce – innovation, imagination, and a profit motive. Private companies have also invested billions of dollars in this great enterprise, saving tax money that the politicians will inevitably use to line their own pockets.

Liberals like to question the cost of the space program. “We could use all that money for our imaginary Climate Change Emergency, or to protect the red-toed tree frog.” Actually, the space program has returned $8 to $10 dollars in benefits to our economy for every dollar spent. See the article below, “Exploring Space Is Still Worth the Cost, Says UT Expert.” And that doesn’t include the billions of dollars in intangible improvements to our lives mentioned above.

Why Obama Rejected John Glenn's Plea to Save the Space Shuttle Program
https://www.csmonitor.com/USA/Society/2011/0516/Why-Obama-rejected-John-Glenn-s-plea-to-save-the-space-shuttle-progam

Hijacked! How Obama and the Left Killed NASA: The Journey from the Moon to Radical Activism
https://capitalresearch.org/article/nasa/