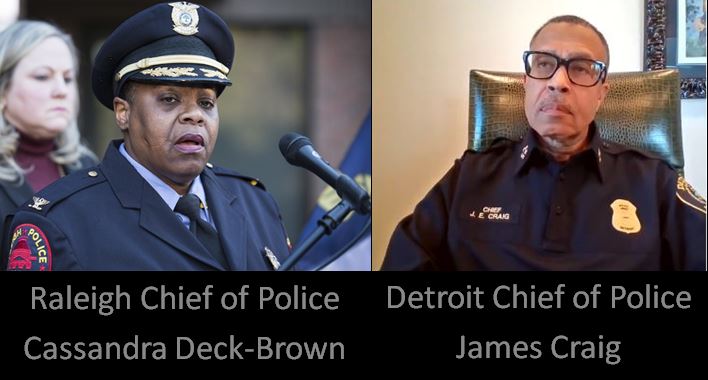 Having been a Deputy Sheriff I know first-hand what power in the wrong hands can do. Fortunately the number of police officers who abuse their power is very small. But the murder of George Floyd has made Americans very aware that power can go to the heads of cops – just like it does to politicians, professors who sexually abuse their students, and others in positions of power.

But a police officer is different because he has lethal force at his disposal. So he has a special responsibility to employ force in a legal, measured manner. And those around him have a special responsibility to ensure that he stays within bounds, no matter what his rank. The man who killed Floyd was the ranking officer at the scene. But if I had been there and the Chief of Police himself had been sitting on Mr. Floyd, I would have put him in a choke hold and dragged him off. The other three officers told the killer to stop, but they didn’t intervene, so they are culpable, as well.

Another part of the terrible tragedy in Minneapolis is leadership. Police leaders failed to remove or retrain this officer who had seventeen complaints against him. The city of Minneapolis has suffered under corrupt Democrat leaders for years. They failed to properly fund the police, and they put political hacks in charge of the department. Now they are trying to divert responsibility from themselves by abolishing the police department they failed.

I just wish most Americans who are so quick to paint all officers with the same brush would experience what police officers suffer every day at the hands of radicals. They throw rocks, glass bottles, fireworks, and frozen bottles of water at police, and hundreds of officers who were on the scene to protect peaceful protestors have been injured. They get in the faces of police, scream unmentionable profanities at them, and even spit in their faces. Very few men can take such abuse and not retaliate. But most cops are well-trained and disciplined, and they just stand there and take it. They serve and protect.

There are almost as many opinions about the riots that are tearing our nation apart as there are Americans. However, there’s one thing that’s hard to argue over: Results. These are clear and tangible. Observe the Tales of Two Cities…

Raleigh, North Carolina police chief Cassandra Deck-Brown has probably never been a real police office, based on her foolish actions and statements. Like so many political appointees, she probably rose up in the department through various administrative positions. If she had ever been a real street cop, she would never have said this:

“I will not put an officer in harm’s way to protect the property inside of a building. Because insurance is most likely going to cover that.” When I became a sworn police officer I took an oath to “Serve and Protect” both life and property. When we put on our badges every day, we understood the risks of the job that we had sworn to do.

What this chief does not understand is that protecting property also protects lives of civilians and police officers. Who knows who might be on an upper floor of the buildings she allowed rioters to burn? What about the innocent black people who have been killed trying to protect their property? Are their lives not important to Chief Deck-Brown?

Her response to the riots was purely political. In fact, in order to cover herself (and perhaps save her job) she has asked for outsiders to conduct an investigation of the department she heads. If, as she claims, their response to some incidents was incorrect, whose fault was that? Real leaders understand that the buck stops at their desk.

Her failure of leadership is the epitome of how not to handle civil unrest. Detroit, Michigan’s Police Chief’s leadership is a model of how those in authority should respond to danger in the streets.

Detroit Police Chief James Craig is a real leader. His city has suffered under violent racial riots in the past – and he refuses to allow that on his watch. In 1967 protests over racial inequality ended in a violent rebellion that raged for days as hundreds of buildings were burned and 16 died. Since then failed Democrat policies pushed Detroit into bankruptcy. Because of the city’s insolvency Craig’s officers are some of the lowest paid in the nation. But they are also some of the best-trained and disciplined.

He told his officers that there would be zero tolerance for breaking the law. By doing so he prevented peaceful protests from becoming riots as they have done in dozens of cities across the nation. “We advised they would be arrested. Some complied, some didn't. Some offered resistance, and so they were taken into custody,” Police Chief James Craig told reporters at the scene Tuesday night.

“We don't want to arrest, but if we have to, we will. I would have preferred that this not happen,” Craig said. “Clearly I would have liked to report to you that it was a peaceful protest, there was compliance, but we have a curfew in effect.”

That is the key. In every city that has maintained peace, the principle has been to arrest the first person who attacks civilians or police, who destroys property, who refuses to obey lawful orders, or who breaks any law. Then arrest the next person, and the next. Eventually the protestors get the message: “You can protest, but you must do so peacefully.” Detroit’s police enforced the law while showing remarkable restraint. There was no violence.

In contrast, the Raleigh police chief tried to pacify violent thugs, and eventually cowered before them. She has no business running a police department if she is afraid to enforce the law. By her inaction she allowed protests to become riots. She and the corrupt Liberal politicians of Detroit are just as responsible for the destruction of Raleigh as the thugs who smashed and burned.

This goes back to the “broken windows” method of law enforcement employed so successfully by Rudy Giuliani when he was Mayor of New York City. The broken windows policy states that visible signs of crime, anti-social behavior, and civil disorder create an urban environment that encourages further crime and disorder, including serious crimes.

Giuliani ordered the NYPD to target minor crimes such as vandalism, public drunkenness, and fare evasion to create an atmosphere of order and lawfulness, thereby preventing more serious crimes. It worked beyond anyone’s dreams.

Some claim that Giuliani’s policies made no difference, since crime in the U.S. overall dropped as well. But during his tenure as Mayor, crime rates in New York City dropped dramatically, far more than in the United States as a whole. Violent crime declined by more than 56 percent in the City, compared to about 28 percent in the nation as whole. Property crimes tumbled by about 65 percent, but fell only 26 percent nationally.

Meanwhile, back in Raleigh and Detroit…

People living downtown described Raleigh’s protest as a peaceful affair at the beginning, with families and children attending, both black and white pleading for an end to violence. But within a few hours, the tone changed as the demonstrators themselves became violent. Rocks were thrown at police and they responded with tear gas. Raleigh suffered major damage from the protests and riots. Some citizens described downtown Raleigh as “ruined.” Hardly a building escaped damage.

Detroit’s weeklong curfew ended Monday, and Mayor Mike Duggan said he is not renewing it because protests have been peaceful. He said the curfew was put into effect because protestors “…brought in rocks, railroad spikes, and fireworks, using them to assault police.” Duggan said at a news conference.

“We haven’t seen those folks in five or six days, so we’re feeling confident now that what we have are protests going on by people from this community who care about this community.” Since the demonstrations began May 29, police have arrested 424 protesters. Police have made very few, if any, arrests since cops started arresting protestors who broke the curfew.

There you have it. The Tales of Two Cities, both with police departments headed by blacks, but with dramatically different endings to their protests.

Detroit's curfew lifted after more than a week of peaceful protests