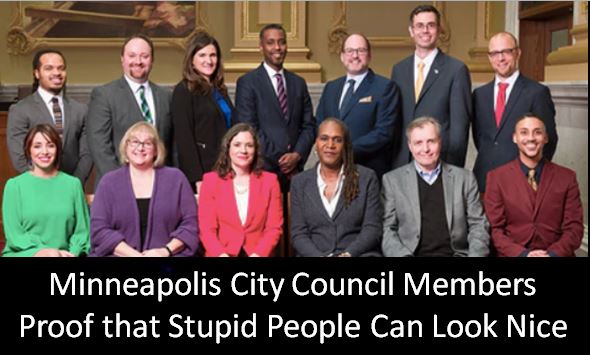 I used to think that Chicago was the most corrupt city in America. Now Minneapolis is a top contender for that title. And they win the title for the Stupidest City Government in the U.S hands down. Currently no other city is close to beating Minneapolis for this title, but based on news reports, other cities may soon become contenders.

The Minneapolis City Council president Lisa Bender, a politically correct white woman said in an interview that calling 911 when someone breaks into your home “comes from a place of white privilege." So minorities can't call 911? I suppose she thinks making an idiotic statement like this will show minorities that she is in "solidarity" with them and get their votes. I believe the opposite will occur. The only organization that protects their lives and neighborhoods is the Police Department.

If she takes that away from them, they will crush her in the next election. On June 7 she goaded the City Council into voting to completely abolish the Police Department. If she wants to personally commit suicide, fine. But she shouldn't kill the innocent people of Minneapolis to further your political ambitions.

And die they will if she (and her "veto-proof" City Council) get their way. They will be safe in their mansions with private security. But the people in poor neighborhoods will have lost their only lifeline when they are faced with violence and danger.

One of the most important insights I have had concerning Democrats who do dangerous and frankly ridiculous things like this is, is their complete ignorance of history. How does she think civilization has survived for thousands of years, if not for the protection of police, sheriffs, constables, marshals, and other forms of law enforcement? What good are laws against murder, rape and other crimes if there is no one to enforce them?

Civilized societies have always had people who enforce the laws. Uncivilized societies end up with vigilantes – people who take the law into their own hands. Imagine waking up one day to find that someone has accused your son of murder. Without any legal proceedings, vigilantes have hung him from a lamppost in the middle of the night. That’s what Minneapolis can look forward to if Ms. Bender has her way.

Her idea for replacement of the replacement is using other city “social services.” What an outstanding idea! Instead of sending an armed office to a domestic violence incident, she wants to send a social worker. I can really see this working. A tiny lady social worker arrives to see a huge armed man beating his wife senseless. Using all the techniques she learned in college, she will invite him to sit down and talk with.

She will “deescalate” the situation by explain to him that killing his wife is actually counter-productive. She will offer him anger management classes and addiction therapy, and he will smile and accept her gracious advice. Or, more likely, he will just shoot her on the spot.

Both as a firefighter-paramedic and as a cop I have responded to many domestic violence calls. First responders consider these the most dangerous situations they are sent to. They are always at grave risk when they respond, and they know it. As soon as we restrain the offender, more often than not the wife will attack us for arresting “her man.” I’m OK when the abused person just attacks us verbally. But when she comes after me with a knife or a baseball bat, I take personal offense at her actions.
What Lisa Bender and her merry band of idiotic City Council members have begun is the process of creating anarchy and utter lawlessness in Minneapolis. At this point the only way to save the city is for the police to act decisively.

We’ve all heard of the “Blue Flu.” This is when police call in sick when government officials abuse them or fail to back them up. It is illegal for police to strike, so they sometimes resort to taking sick days. Perhaps the entire Minneapolis Police Department should call in sick. In just one day, the people who have been calling for their disbandment would be begging them to come back to work. And the corrupt city government would be thrown out of office.

One can only hope.