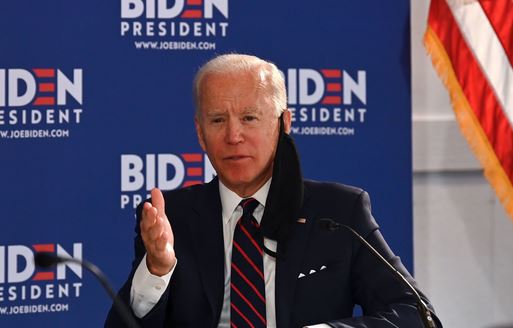 Can you imagine a president who goes everywhere with a mask hanging off one ear as if it were some sort of badge of honor? I guess it's meant to show that he's a good little boy who does what he's told, but he looks ridiculous. If he's going to wear it, wear it. If he's not wearing it, put it in his pocket. He has no need to wear a mask at all. Everyone who gets within 20 feet of him is tested every day, as are the people around Trump. But he's willing to look stupid so people will think he is smart.

Being a good little boy who does whatever he is told will be a very useful skill if by some miracle he is elected. I'm sure he realizes that if he is elected, he will never be president; his Vice-President will. And then he will be gone within six months. Some say three, but I think even the heartless Democrat National Committee (DNC) wouldn't humiliate him that much.

But there is no doubt that within six months he will be given two choices. He will be allowed to resign for "health reasons." Or his Cabinet (chosen, like his Vice-president by the DNC, Soros, and other donors) will remove him from office using the 25th Amendment.

If you don't follow politics, you probably realize that political parties have learned from history that you never run someone for president unless you are reasonably certain that they can last 2 terms under the stress and strain of the office. It just costs too much money to put someone in office who couldn't possibly be elected to a second term. Biden couldn't possibly last one term. So they have no intention of allowing him to be president.

If elected, he would be 78 when he took office. He is buckling under the strain of campaigning at his age. Imagine an 82-year-old Biden campaigning on his walker. Worse, imagine an 86-year-old Biden plunging the nation into war at the end of year two because he forgot which country he was dealing with. If he can't remember what office he is running for, and can't tell the difference between his wife and his sister, how can he run the most powerful nation on earth? He made a fool of himself by telling a black reporter, "If you vote for Trump, you ain't black!" (You can see these three videos, and dozens more like them, with a simple YouTube search for "Biden is Losing It.")

Two-thirds of Democrats want him replaced on the ticket by someone else. Voter enthusiasm for Biden among registered Democrats is as low as it has ever been for a presidential candidate. So what are the party bosses to do?

Democrats mistakenly believe that they nominate their presidential candidates. In truth, they have little if any influence on the outcome of the nominating convention. They have so many crazy rules, including "super delegates" (washed-up politicians, elected Democrats, and big donors) who can out-vote the duly elected delegates. 27% of these have pledged to vote for someone other than Biden - many of them for Bernie Sanders. So there is small enthusiasm for Biden even among the party bosses. (By the way, Democrats have been ridiculed so many times for their undemocratic "super delegate" system that they have changed the name to "automatic delegates.")

Another way the Democrats undermine the will of their members is by throwing the support of the DNC behind one candidate at the expense of another. At one point in the primary Bernie Sanders had far more momentum than Joe Biden, and he was beating Joe up in the debates. So the DNC only allowed Biden to use their massive mailing and email lists, and Bernie had no access. Plus, they directed donors to Joe and not to Bernie, and the DNC ran millions of dollars in the ad itself that benefited Bernie. So it's possible that if the DNC had played fair Crazy Bernie would have been their nominee instead of Feeble-Headed Joe.

In any case, in the end it won't matter. Trump will be re-elected. But if the Democrats succeed in their voter-fraud endeavors, Biden will only be in the White House for a matter of months.

What then? This why it is crucial to the evil power brokers who run the Democrat Party from behind the scenes must place an extreme radical for Biden's running mate. Under the Constitution, if the Office of the President becomes vacant, as it will, the Vice-president automatically becomes President. The new (extremely radical) puppet president will then appoint a vice-president. No input from the voters whatsoever is required. All that is needed is a simple majority of Congress to approve him or her. Congress will undoubtedly vote to approve, since the ultimate nightmare scenario of the president dying in office without a legitimate Vice-President in place would mean Nancy Pelosi (who, as Speaker of the House, is third in the line of succession) would become President.

Even the Democrats wouldn't be able to handle that. Pelosi is ten times smarter than Biden, but she is also ten times as evil. If they took a vote for the most hateful person in Congress, she would win by a landslide. That's why, even though the Constitution doesn't require the President to appoint a Vice-President, Soros and the DNC will order him or her to do so immediately.

There you have it. If Christian Conservatives don't work hard for the next 100 days to re-elect Trump, what I have described above will happen. It will be worse than any horror movie you have ever seen. And America will never again have a Conservative President.