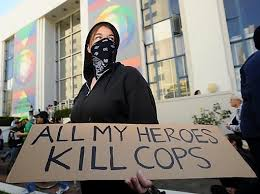 NOTE: I shouldn't have to say this, but I will. Most black people I know are Conservative Christians, and they feel the same as I do about BLM. I love the black people in my church, in the classes I teach, and those I meet in my every day life. They are nothing like the hate-filled people I describe below. I won't allow anyone to equate my criticism of an evil group that supports abortion and is racist itself with racism on my part. And you shouldn't either. Read this article, and do the research yourself. You will find that BLM is not at all what it claims to be.

Many Americans, white and black, who believe the propaganda of the Liberal media, think Black Lives Matter (BLM) is a grassroots movement of concerned people who care about the rights of black people. It is much more, and much worse.

The group uses the name "Black Lives Matter" deliberately to garner sympathy for a hate group that cares little for black lives. They have murdered black police offices, black bystanders who opposed them or tried to protect their businesses, and black children who got in their way as they smashed and burned.

Apparently "Black Lives Matter" only to BLM only if they agree with their radical hate-America philosophy. If a black person is a Christian, a Conservative, or disagrees with using violence to effect change, their lives don't matter. They kill them as readily as they kill white people. And they strongly support the abortion of black babies. It seems "Black Lives Matter" only after they are born.

Before the full truth was known, Americans who have their eyes open have known that BLM was not a peaceful advocacy organization for black rights. We have all seen them marching through our cities screaming, “Kill All the Pigs – Fry ‘Em Like Bacon.” We have seen the signs they thrust in the faces of police, including, “We’re Going to Kill All of You,” and “We’re Going to Rape Your Wife.” We have seen them attack the very police who risk their lives to keep their neighborhoods safe. They have thrown rocks, feces, glass bottles, and firebombs at them. They have tried to blind officers with lasers. But the real truth is much deeper and even more dangerous than their violent riots.

Black Lives Matter is a major multi-million dollar national corporation, whose real name is Black Lives Matter Global Network Foundation (BLMGNF). (That’s right…it’s one of those capitalistic corporations they profess to hate.) They receive millions of dollars in donations from Liberals who hate America, like George Soros, Democrat former politicians, and Hollywood know-nothings. In addition, it extorts millions in “donations” from major national corporations. (Every time you see one of these corporations bragging that they support BLM, write them and tell them you will never do business with them again.)

This is from the BLM website. It’s taking over the country! As of this writing, BLMGNF has “chapters” (read: mob organizers) in: Boston, Chicago, Washington DC, Denver, Detroit, Los Angeles, Lansing, Long Beach, Memphis, Nashville, New York City, Philadelphia, and South Bend; and in Canada in Toronto, Vancouver and Waterloo. (If you were impressed by how all those recent riots erupted simultaneously from a grassroots movement…well…maybe not so grassroots.) If you wonder where they spend all their ill-gotten gains – they give half a million dollar grants to any charismatic individual with a following who will start a BLM “chapter” in a major city.

BLMGNF is a not-for-profit corporation but not tax-exempt, so donations are not tax-deductible. Except...if you go to its website and want to donate, you are transferred to ActBlue Charities which will take your donation, give you a tax deduction, and then distribute your donation to BLMGNF. Sort of…

Taken directly from ActBlue’s web page, “Our (ActBlue) platform is available to Democratic candidates and committees, progressive organizations, and nonprofits that share our values for no cost besides a 3.95% processing fee on donations. And we operate as a conduit, which means donations made through ActBlue to a campaign or organization are considered individual donations.”

ActBlue consists of three parts: ActBlue Charities facilitates donations to left-of-center 501(c)(3) nonprofits; Act Blue Civics is its 501(c)(4) affiliate; ActBlue is a 527 Political Action Committee. These three have raised over $5 billion dollars in the sixteen years since it started. If its 3.95% transaction fee has been applied to all donations, that equates to over $197 million.

So, ActBlue is a Democratic Party front affiliated with BLMGNF. If only it was that simple and stopped there.

Per Business Insider Australia, “ActBlue…distributes the money raised to Thousand Currents, which is then granted to Black Lives Matter”.

What’s the significance of the above?

Black Lives Matter is not some fly-by-night fad that is going to loot, kill, burn, and destroy and then disappear into the ash heap of history. It is a criminal enterprise (inciting of riots, arson, rape, murder are all felonies encouraged and funded by BLM) consisting of multiple inter-locking corporations. It is big business which is heavily associated with and supports the Democratic Party and it is here to stay. Arguing whether Black Lives or All Lives Matter is meaningless and distracts us from what it is trying to achieve. It doesn't care about Black people. It cares only about anarchy and dividing our nation - to the point of Civil War if they can achieve that. It is a massive left-wing political movement that will have a significant impact on the Democratic Party programs for the foreseeable future.

Socialism and Communism are intimately linked to these efforts, while the US Constitution and especially the Bill of Rights have no place in their plans. Patrisse Cullors, one of Black Lives Matter’s co-founders states on their official website, “We are trained Marxists and Marxist organizers.” This reminds one of the tiny minority of Marxists in Russia took over a huge nation, and turned it into a massive Communist "Worker's Paradise" where the workers were enslaved and many starved. Through the effort of this small group of people (who all became very rich along the way) the Soviet Union was birthed, and ultimately forced 14 nations to join them by force or coercion.

The president of Greater New York Black Lives Matter said that if the movement fails to achieve meaningful change during nationwide protests, it will “burn down this system.”  Not the peaceful change we celebrate under our Constitution but violent change. For those of us who like our Constitution, this is a challenge thrown in our face. If you listen to the Democrats and other Socialist and Liberals, all you will hear is that these are peaceful protestors. But if you believe your lying eyes and switch the channel to the only truthful TV channel, Fox News, you will see for yourself that America is burning.

Riots every day for three months straight in Portland. Seattle taken hostage by Black Lives Matter and aided by a Democrat Mayor who refused to let the police do their jobs, and a Democrat governor who refused the offers of help from the National Guard. Murder rates in Chicago and New York City double in the first six months of 2020 the number of murders in all of 2019. Democrat-run cities and states in panic with millions of citizens fleeing the insanity. (Will the last Patriot to leave New York City please bring the American flag? They don't want it.)

If you have wondered why politicians have danced around criticizing Black Lives Matter, now you know. They are afraid - very afraid. Even our normally fearless president, who designated Antifa a Domestic Terrorist Organization, has hesitated to so designate Black Lives Matter.

But there is only one thing to call a very organized group with central command and control, which sends its trained, armed agitators to every part of the country to stir up local demonstrators and turn them into rioters. (Police in every city where the riots have spread have noticed huge numbers of out-of-state license plates.) There is only one title to give to scum who beat old ladies to the ground, murder police and federal agents, kill anyone who gets in their way, loot millions of dollars of property, burn police precincts, courthouses and tens of thousands of businesses; and rape women in their spare time. They have earned their status as a Domestic Terrorist Organization. It should be awarded to them ASAP, and they should be treated accordingly by federal authorities.

To our leaders in Washington, DC: You all swore an oath to protect and defend our nation from all enemies, foreign and domestic. Start doing it and stop being afraid of being called racists. The people who are funding BLM and pulling their strings from behind the curtain (like George Soros) aren't black, anyway. If black people were really running BLM, they would still be Domestic Terrorists. And THEY would be the racists, since they openly state that they want to kill white people and burn down what they call our "White Supremacist Nation."

NOTE: The basis of this article (including the facts about the BLM organizations) came to us as an anonymous “Email of the Week”. As I edited it, I realized that there was much more to be related than the writer had included. So I turned it into an article. My thanks to whoever sent in the email that was the inspiration for this piece.

CNN: Is BLM Blowing It? They Refuse to Denounce the Murder of Hundreds of Cops.
https://www.cnn.com/2016/07/29/us/black-lives-matter-blowing-it/index.html

Bystander Attacked by BLM Mob Because He Was White
https://nypost.com/2020/08/20/portland-driver-believes-he-was-attacked-because-he-is-white/