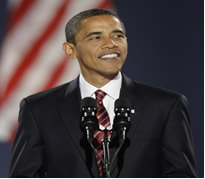 At least Bill Clinton waited until he was inaugurated the first time before he started his campaign for a second term. Obama started his second campaign on election night.

During the campaign he promised America things that any sensible person could see were impossible. He would "...hire an army of teachers and pay them more." The federal government can't hire teachers, and therefore can't pay them.

He promised to pay for a college education for every student who would get involved in a volunteer program. Volunteer programs don't generate cash, so where would the money come from to pay for college for millions of kids?

He said he would legislate universal health care. Besides the fact that, even if he completely stripped the defense budget, there wouldn't be enough money for that, there is the question of what "health care" means. Does it include abortions for people too lazy to use birth control? Obama says, "Yes." Does it include the huge costs of elective plastic surgery, something many Democrats have pushed for? He doesn't say. But until we have a clear definition for the term "health care," we are looking at a tab that could literally bankrupt the nation.

He promised to cut taxes for 95% of Americans, and tax the other 5% to death to pay for the 95%. This is laughable.

He promised to lower energy costs, and to "...keep people in their homes." These last impossible promises must have influenced the lady who was interviewed following his election night speech in Chicago (the birthplace of corrupt politics). With tears in her eyes Peggy Joseph said, "This was the most memorable moment of my life." (She had her daughter next to her, so one must assume she is married. Most women would say that their wedding day or the birth of their child was the most memorable moment of their life, not a political rally. But such is the power Obama has over gullible people.)

She then went on to say, "I won't have to worry about putting gas in my, I won't have to worry about paying my mortgage!" (I know this is hard to believe, but I have quoted her word for word. See it for yourself: http://www.youtube.com/watch?v=L6ikOxi9yYk). She went on to say, "If I help him, he's gonna help me," referring to the fact that she had campaigned for him.

I find it unfathomable that any American would believe such ridiculous promises from a slick politician. Obama promised things that no president has the power to deliver, knowing he couldn't fulfill them. But he had a reason for doing so.

A week before the election his campaign began putting out the word that people should "lower their expectations" of what Obama could accomplish. Of course these were expectations Obama had planted in their heads in order to buy their votes. But pundits wondered why Obama wanted to lower expectations. That became clear on election night.

After getting naÃ¯ve voters used to the idea of the wondrous government freebies they could expect under his administration, he took hope away in his speech. He told them that he couldn't put them on Easy Street "...in one year or even in one term." Translation: I will redistribute some taxpayer's wealth to you in the next four years. But you have to reelect me to get all the goodies. What arrogance! What manipulation of simple people's emotions! What disdainful abuse of trust!Â

This week the two most important people in my life wrote letters to the two presidential candidates. After I read them today, I thought you would enjoy their perspectives. In her impassioned letter, my wife, Ana, poured out her heart to John McCain. And our little girl, Sarah, wrote a letter to Obama without telling her parents. In her honest and frank way, and in her own words, she tells Obama what millions of Americans would like to tell him. The letters will be sent directly to their addressees, in case they don't read Conservative Truth every week.

Let me start by saying that your courage in serving our nation is legendary. I thank you for the sacrifice you made when you fought for our country. You worked very hard to win this election. I saw it every day of the campaign. You campaigned with all your heart. I admire your persistence.

However, having said that, I must say that you were not my first choice for President. I voted for you and donated to your campaign, because I did not want Obama to take power. You didn't define your message very clearly. I don't really know if you had one.Â  To tell you the truth you seemed weak on your policies. You should have simply explained the Republican platform and promised to implement it.

Obama never really defined himself either, but he had four times the money you did to sell himself to the people. He was given a mantra by his speechwriters and he repeated it ad nauseum. It was a mantra that had no substance and still doesn't. He was marketed and elected by the press. He stayed on a message that tickled people's ears. He promised them the moon, but then, during his acceptance speech he started his campaign for a second term!! He said, "Our climb will be steep. We may not get there in one year or even in one term."

I appeal to you: Don't allow Obama to take us into a deeper recession; fight to keep our taxes low. Be partisan for once, not a fence walker. Reagan was proudly partisan, and he was respected for it. Stick with those of us who are trying to keep our nation free and prosperous. Don't abandon us. I saw right through Obama. I think you did, too, but you weren't open enough about it.

You thought you were being fair with the McCain-Feingold bill, but it sure came back to bite you, didn't it? Obama insulted you, McCain-Feingold, and the nation. He took huge illegal donations from people who will demand power in his administration. The worst thing is that we don't know who they are, because he refuses to disclose his contributors. Sadly we don't know who Obama is either.

I would like to address another important subject that has to do with your honor. You have a reputation as an honorable man, but recent events have placed a black mark on that reputation. Members of your campaign are trying to destroy someone who put you and your message over the top for a while. Sarah Palin has been truthful and good, and she convinced many of us who didn't like your record to stand with you. Now some in your campaign are trying to harm a good lady. Sarah Palin has done nothing wrong. Shame on you, Senator, for allowing your people to try to hurt her good name. Tell them to stop this and apologize publicly to Governor Palin. Now is the time to be a true reformer. You have the power to stop them; use it!

Sarah and her family opened themselves up to the country; then you turned your back on her. Stick up for her just like she did for you. Don't allow your people to continue to hurt her; that would be a disgrace. If you don't stop this character assassination do this you will be known as a two faced man. Do you want people to say of you, "With a friend like him, who needs an enemy?" I think not. You must help Sarah Palin.

Senator McCain, Obama will drag our country down. Many Republicans will help him do it because they are afraid for their political lives. They need to be more afraid if they do. In two short years one third of the Senators and all the Representatives will be up for re-election.

In your concession speech you said that you will help Obama. Don't do it! Instead, help our nation! Don't continue in your old bipartisan ways. They didn't help your candidacy for the presidency, and they may cause you to lose your Senate seat in 2010. The Democrats have never been bipartisan. Stand with the people who voted for you. There were millions of us, after all.

An unknown has been elected to the presidency by people who don't understand his plans. They will be shocked beyond belief as he starts to implement his leftist agenda. You are a senior Senator. You have power. You can persuade. Don't join the leftist Democrats and the liberal Republicans. Join us, the conservatives, the soul of the Republican Party. The ones you know in your gut are right.

Thank you for reading this letter.

I'm a Republican. I'm 11 yrs old and a not-very-political girl. I usually don't write to the President (this is my 3rd time) except for special occasions.

To tell you the truth, I almost cried when I heard you won. But I'm sure you're glad.

I'm disappointed about the bad things you and your wife said about America. And, no offense, sir, but I really don't like your preacher. I'm not saying that you shouldn't like him, but if he's all you've got...I'm worried.

I know that you don't really care about what I say, but I've been wanting to get this off my chest:

A lot of America trusted you, and you must be proud. You will make history as the first African-American President. I know you went through a lot [of lying] to win. You told the whole country lies, and my family is disappointed.

Many Presidents lie to become President. Some succeed, some fail. You succeeded. But if you care for America even just 1%, give your citizens some mercy. Do at least a little of what you said you would do.

Life is sort of like the Presidency. When you break your mom's favorite vase, or tear your dad's new shirt when you said you would do your homework; it's like when the President tells the nation that you will lower the taxes, but no...you will do the OPPOSITE!!

But no matter how I feel about you as a person, I will pray for you as the President.