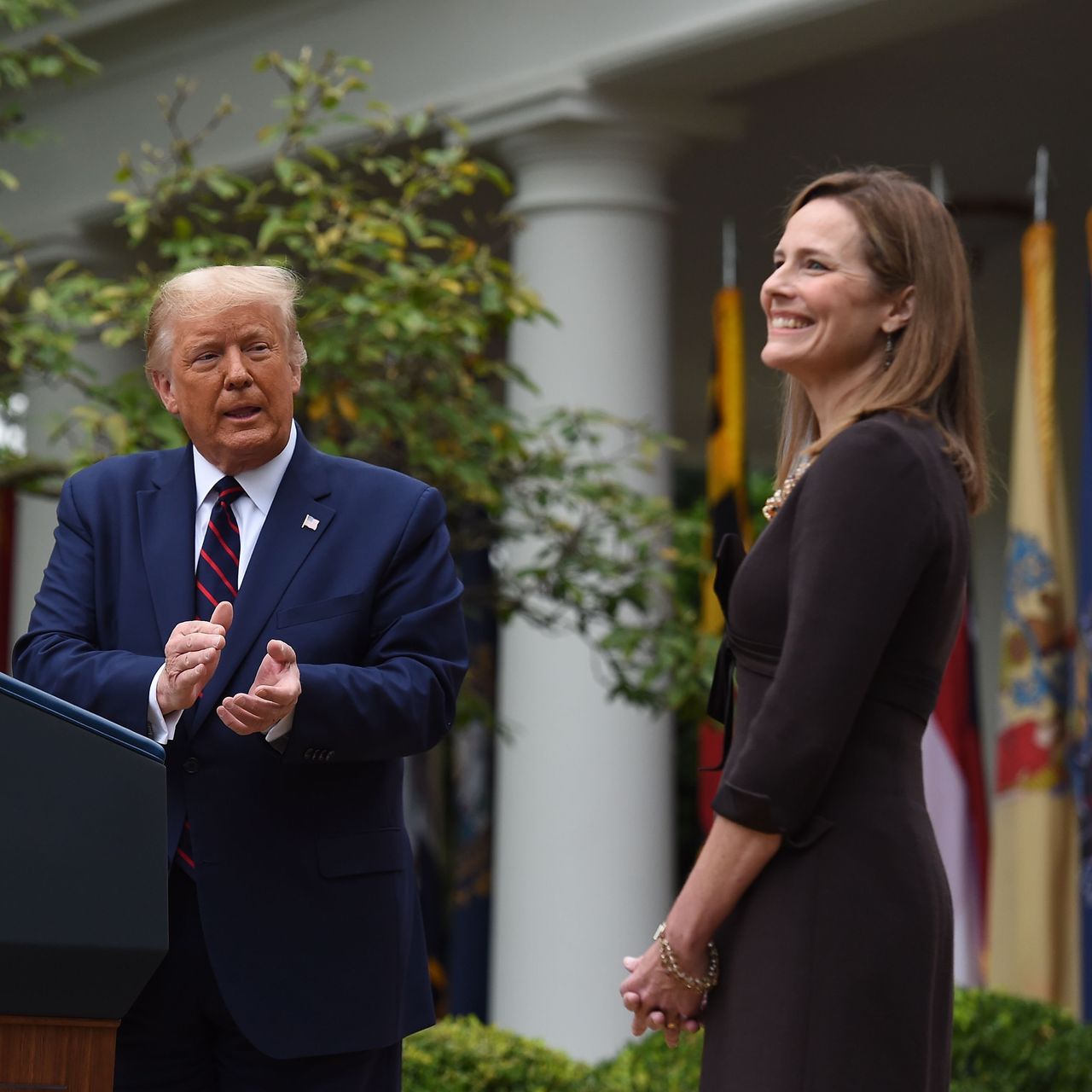 Judge Amy Coney Barrett is not actually a relative, even though we share the same last name. But I would be proud if she were. President Trump would have to look hard and long to find a better choice for his nominee to the high court.

I wrote this article in 2018 when she was on the very short list for the seat that ultimately went to Justice Brett Kavanaugh. Even though she was not nominated, the Democrats viciously attacked her when she was still under consideration.

Later she was nominated for a seat on the 7th Circuit Court of Appeals, for which she received Senate approval. But although the Constitution specifically forbids any consideration of one's religion when being considered for any public office, the Democrats, led by the extremely nasty Diane Feinstein, repeatedly brought up her religious convictions as being a factor that should disqualify her.

The hypocrisy of the Democrats is staggering. After decades of watching them lie, smearing the names of patriotic Americans, and calling anyone who disagrees with them racists, you would think I would be used to their evil machinations. But as I watched them attack Judge Kavanaugh during his confirmation hearings my blood boiled. The Democrats dredged up an emotionally unstable woman that he went to high school with decades earlier and made the judge and his family listen to her tell vile lies with absolutely no foundation. She was proved to be a liar whose political motive was to prevent a Conservative from being confirmed.

Here's the ultimate hypocrisy. They fabricated a case to convince America that Judge Cavanuagh, a decent family man, was immoral, and thus not qualified to sit on the Supreme Court. Then when Judge Barrett was nominated to the 7th Circuit they savaged her because she was too moral. No way would they permit someone who believed in following the Word of God to sit on the federal bench. She might be influenced by her deep faith to rule according to her moral principles. They would much rather have atheists, Muslims who hate Christians and Jews, and perverts of all stripes (lesbians, homosexuals, bi-sexuals, pedophiles, transgenders and so on) sitting in judgement over America.

I have no doubt that the Democrats on the Senate Judiciary Committee will repeat their performances from her confirmation hearings for the Court of Appeals - but worse, because the stakes are higher. They will scream at Judge Barrett; make disgusting speeches in the guise of questions and then refuse to let her answer; and tell every lie possible to make her appear to be a religious cultist. And, like last time, she will accept their bullying and character assasination with grace and dignity. She will be confirmed, but first she will have to endure the treatment they gave Justice Kavanaugh. And for what? Because they hope to convince a few voters to turn their backs on Trump.

Well, that's enough introduction. Little has changed since I published the article below under the title, "Will My Cousin be the Next Supreme Court Justice?" As you read it, you will see that the Democrat's smash and burn tactics haven't changed. No matter who they hurt, no matter how many lies they tell, they believe they are justified, because moral people frighten them. Like the Bible says, they love darkness rather than light, because their deeds are evil.

Before we get to Judge Barrett, let me take a moment to thank Justice Kennedy. Actually, all patriotic Americans should thank him for his great gift to our nation and the Constitution. At 81 years of age, Justice Kennedy didn't just start thinking about retirement when President Trump was elected. He had to have been thinking about it for years. But he chose not to retire during Obama's reign of terror because his replacement would have been chosen by the most Liberal and unprincipled president in recent history.

Instead, he blessed our nation by waiting to retire so that President Trump could choose his replacement. For that, we should be forever grateful. His replacement will give the Court a solid Conservative majority for years to come. You see, Kennedy was a "swing" Justice. He voted with the four conservative justices most often, but he also swung over to vote with the liberal ones. In particular, Conservatives disliked some of his decisions on social issues like abortion and homosexual marriage. But now we will have five solidly conservative justices, and only four liberals, thanks to Mr. Kennedy.

The first reason Trump should choose Judge Amy is that the Democrats hate her. As of this writing, the president hasn’t chosen his nominee. Barrett is on his short list, though, and that was enough to get the Dems hysterical. They have savagely attacked her for the last week, not because of her credentials, but because of her faith.

This is amazing to me. The Liberal Democrats always rush to the defense of Muslims, even when their religion is not the issue. A good example of this is the president's ban on travel from seven key terror-sponsoring nations, listed as such by Obama. Although two of the nations were not Muslim nations, and only 8% of world Muslims reside in the other five, the Democrats claimed that the order was a violation of Muslim religious freedom.

But in Judge Barrett’s case, they have no problem attacking her specifically because of her Charismatic Catholic faith. The attacks have been savage. They mirror the disgusting assaults on her faith by Democrats in 2017 when she was eventually approved for her current seat on the 7th Circuit Court.

They didn’t attack her on her credentials, because they are impeccable. The Senate is supposed to “advise and consent” regarding the president’s nominees on the basis of their qualifications. Instead, they assaulted her for being “too Catholic.” And they’re doing the same again today.

Democrat Senator Dianne Feinstein rudely said to Barrett during her hearing, “When you read your speeches, the conclusion one draws is that the dogma lives loudly within you.” She implied that the Pope would have more sway over Barrett’s decisions than would the Constitution. Similar attacks were made against John F. Kennedy, who became the first Catholic U.S. president in spite of the bigotry.

Democrats have also made snide remarks about the fact that she has seven children, and that she attends church often. Shocking! Amy Barrett is a religious person who is faithful in the practice of her religion. Certainly, that is grounds to disqualify her for public office – even though she was approved by the same Senate committee just one year ago.

But it gets worse. Barrett is no ordinary Catholic. She is a Charismatic Catholic. And – even more nefarious – she is a member of a group called the People of Praise. The Democrats have tried to cast the group as “a secret organization” and as a “cult.” They claim that the members take secret “oaths of allegiance” to the group and that the group would order her to decide Supreme Court cases according to its “dogma.”

These are all scary words designed to frighten Americans. Who wouldn’t be afraid of a religious nut job who couldn’t think for herself? But let’s look at each of these claims and find the truth behind the hysteria.

The group, founded in 1971, is so “secret” that it has an extensive website (see LINK below). What they call a cult is what millions of Americans live every day – community with other believers. This can take the form of home Bible studies, small fellowship groups, or more formal church activities, like a youth group. All of these are characterized by the very activities the Democrats denigrate: Sharing their lives with one another; holding one another accountable if they stray from the Bible; and giving advice on important life decisions.

What the Democrats cast as “secret oaths” is something the Bible calls “covenants.” A covenant is nothing more or less than a promise. Marriage is a covenant between a man and a woman. Adoption is a covenant that a couple makes with a child to raise him or her as if they were born to them. When Christians join a church, that is a covenant.

And the leaders of the People of Praise dare to give advice to the members. Horrible! Except for the fact that church leaders have done the same for thousands of years. They are variously called pastors, priests, elders, deacons or just leaders of groups. The People of Praise call them “heads.” All are Biblical terms. And the roles of all of them in Christians’ lives are Biblical, as well. Those who are more mature in the faith are commanded to instruct and advise those who are new to the faith.

The main thing that frightens the Democrats is having the Senate confirm a person of strong faith. So they take every word, every phrase, and twist so it seems to mean something reprehensible. That’s the way their dark, wicked hearts work. They take something beautiful that God created, like community among believers, and mischaracterize it to match their sick, lost worldview.

National Review writer David French put it this way: “The People of Praise…is a group so nefarious that the late Cardinal Francis George wrote, ‘In my acquaintance with the People of Praise, I have found men and women dedicated to God and eager to seek and do His divine will. They are shaped by the love of Holy Scripture, prayer and community; and the Church’s mission is richer for their presence.’ It’s so dastardly that Pope Francis appointed one of its members as auxiliary bishop of Portland. And it’s so insular that it’s founded three schools that have won a total of seven Department of Education Blue Ribbon awards.”

But nothing will satisfy the Liberals. Law professor Richard Painter tweeted this week: "A religious group in which members take an oath of loyalty to each other and are supervised by a male 'head' or female 'handmaiden.' That looks like a cult. Now she wants a seat on SCOTUS for the sole purpose of overturning Roe v. Wade. The answer is NO."

And there’s the crux of it. Barrett has made no indication that she would try to overturn Roe. In fact, her public comments and testimony say the opposite. She has made it clear that when the law and one’s personal convictions are in conflict, judges are obligated by their oaths to follow the law. (I’m sure she believes, as I do, that it the job of Congress, not judges, to create the law.)

“Crux” is defined as “The decisive or most important point at issue.” So I guess that in the case of the Democrats’ panic-stricken reaction to Judge Barrett’s potential nomination, there is another “crux” to the matter. That is the fact that she – or another – will be nominated by Trump. If you follow the news, you are very aware that as soon as Justice Kennedy announced his retirement, the Democrats announced that they would oppose the president’s nominee. Without even having a clue as to the identity of the nominee, they immediately hated him or her.

If the president were to nominate Hillary Clinton (shudder!), they would oppose her. So he might as well forget about trying to please the Democrats. Forget about nominating a “middle of the road” justice like Kennedy – they’ll oppose that, too. I believe the president will keep his promise to appoint as many Conservative, Constitution-honoring justices as the Lord allows. And in doing so, he will have far more impact on the future of America for the next four to five decades than his eight years in office.