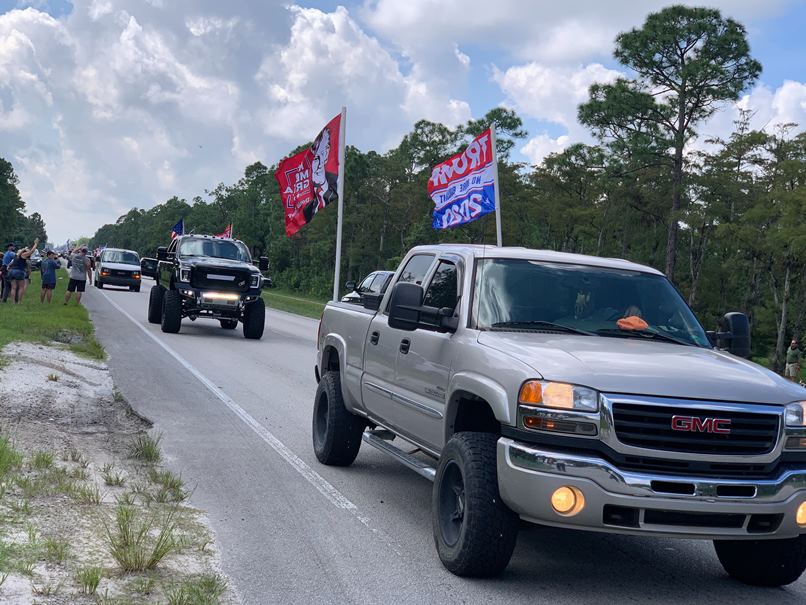 Yesterday I had an amazing experience that gave me even more confidence that President Trump will continue to lead our nation for four more years. My friend and former office manager, Cindy Waymire texted me that she was waiting for a parade of Trump and law enforcement supporters to reach an intersection near my home. I quickly dressed and drove to join her.

What I saw made me even more proud to be an American, and glad that I had voted for President Trump. You see, pre-Trump Democrats were always demonstrating, screaming curses, beating old ladies (as the homosexuals did in California) and often smashing windows to show how committed they were to their Liberal  lies. But you saw very few Republican demonstrations. And when you did they were typically low key - no one ever beat up opposing demonstrators or smashed and burned property.

President Trump has changed the political landscape of America. Tens of thousands of Patriots now feel excited about America again. After the eight years of Obama's reign of terror, they have been energized to show the nation that people who LOVE America can made their voices heard over the shouts of those who despise their own nation.

When Trump ran against Hillary Clinton, tens of thousands of people attended his rallies. People stood in line for hours in hot or cold weather just to be in the same huge auditorium with him. Hundreds camped out for days to make sure they got in. I received a Press Pass for his rally at the largest venue in Palm Beach County. Even though I had been assured that my badge would ensure that I would get in, I decided to drive over four hours early. I couldn't get within five miles of the rally. So many people had come that the police had to block off the major roads. Since I knew the back roads, I tried them, only to find them barricaded as well. I had to watch the rally on TV.

Hundreds of people attended Hillary's events. She insisted that the camera's focus tightly on her and her handfuls of supporters so that TV viewers wouldn't see the empty halls.

This time it's the same. The difference is that Trump has to hold his huge rallies outdoors because of the China Virus. And Joe Biden, who says that China is not our enemy, is lucky to have a few dozen people who care enough to hear him blather on about the old days when he supposedly saved America on at least a monthly basis.

I wish you could have seen what I saw yesterday. Over five hundred vehicles of all kinds carrying over 2,000 excited Trump supporters drove through our small town in a parade over four miles long. I stood there waving at them and videotaping for over 30 minutes.

I saw every kind of vehicle you could imagine. Pickup trucks, luxury sedans (no, all Conservatives are not poor white trash, Biden), huge military vehicles, motorcycles, swamp buggies with as many as twenty people, a delivery vehicle from Publix (a large Christian grocery chain), golf carts, a teenage boy who rode for miles on just his back wheel!, antique cars, and even a go-cart driven by two young boys.

Of course, if you listen to CNN (the Communist News Network), Bloomberg, or read the New York Times, you know who Conservatives are. We're all angry old white men who hate anyone who's not like us. But shockingly the Trump Train was full of people of all colors, hundreds of teenagers and Millennials, and more females than males. About the only demographic that wasn't present was the people dressed in black, carrying crowbars, baseball bats and firebombs. They were all busy smashing and burning businesses at the "peaceful protests" encouraged by Democrat mayors.

And the flags!! American flags, police flags, veteran flags, flags from all the branches of the military, and of course Trump-Pence flags. One American flag was so huge (at least 30 feet long) that one end had to be attached to the cab of the truck so it could fly flat. If it had been on a pole it wouldn't have fit under a bridge. Many vehicles had six to had flags flying.

And the noise!! Sirens blaring, horns beeping, young people shouting "Four more years!" as they drove by. And the bystanders were shouting encouragement to the people in the Train.

Where did this Trump Train come from? And what about the thousands of Trump Boat Parades, Truck Parades and Tractor Parades all over the country? (Sorry if you haven't heard about them - only FOX News shows what's really going on in the country - ABC, NBC, CNN, and MSNBC all censor anything positive about our president.) You would think that the Trump Campaign had been working long days organizing all these events.

And you would be wrong. The Campaign hasn't had anything to do with organizing the tens of thousands of patriotic Americans who have put on these displays of love for our president, our military and our police. They have all been grassroots from beginning to end. Conservatives have finally figured out how to use social media to notify friends who been waiting for ways to show their love for our president and our institutions.

Of course, the Democrats have their own demonstrations to show their appreciation of the police and our military. No, wait. They're calling for the abolishment of the police and for slashing the military budget as Obama did. Unions used to support Democrats. Now the largest police unions in the nation have endorsed Trump. And although they have to be careful about outwardly supporting the president, exits polls in 2016 showed that almost all active duty military voted for Trump. And early voting exit polls show the same trend today.

The Democrats are foolish to antagonize the police, military and veterans. Veterans and active duty military make up 13% of the electorate - and they vote, unlike other demographic groups. As a whole, police at all levels, active duty and reserve military, national guard and veterans are among the most patriotic Americans. Most Americans of both parties talk a good game, but these people actually put their lives on the line for their country. And they overwhelmingly support Trump and reject the spineless Joe Biden - just as he has rejected and voted against them during his 47 years in the Swamp. Just a few weeks ago in an interview he said he approved of cutting funding for police departments.

Friends, you need to get on the Trump Train. Millions of Americans quietly support Trump, but are afraid of being physically attacked if they speak up, or having their homes vandalized if they have a Trump-Pence sign in their yard. And they're right to be concerned. There have been hundreds of reports of Democrat bullies terrorizing elderly Americans and vandalizing the property of Trump supporters. When have you ever heard of a Republican tearing down Biden signs or assaulting a Democrat for expressing his views. That's not the way we roll. But Democrats have succeeded in intimidating many Republicans.

But it's time to come out of the closet and take a risk. The police and military have risked their lives so that you could have the freedom to express your views. Don't waste their sacrifice. Stand up and be counted.