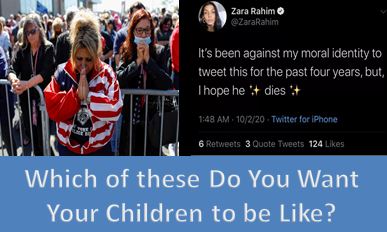 No, I’m not making this up. Thousands of Leftists have posted on Twitter and Facebook their desire for the President and First Lady to die from the China Virus. Many of them went further, and wished for a “terrible painful death” for them. And millions of heartless, soulless idiots re-posted these vile prayers to Satan.

“Prayers to Satan”? Of course. No Christian would pray for such a thing. And the Democrat Party of the last two decades has been more anti-Christian than any political Party save the Communist Parties of Russia and China. Jesus said, “If you aren’t for me, you’re against me.” (Matthew 11:20.) So who else could they be praying to? They may not realize it, but they are working for Satan, and when they pray for the death of our leaders when the Bible says we are to pray for their health and safety, they are indeed praying to the enemy of our souls.

Please don’t run out and tell your friends that Tom Barrett thinks all Democrats are Satanists. I’m speaking specifically about the evil Democrats, particularly the leaders of the Democrat Party who either utter these vile curses or condone them. For instance, as reported by the Federalist, Joe Biden has yet to denounce these people, most of whom are his supporters and some of who have worked for him. “But Biden said he’s praying for the President.” There’s no risk in that. But it would take courage, the kind of courage that America needs in its leaders, to denounce the filth being spewed by his people. Biden doesn’t have that courage, and therefore he is not a leader.

Some of these people are rank and file Democrats who have been so brainwashed and filled with hatred that they mimic the speech of their leaders. But the majority of Democrats are decent people, who have been misled by their families, their unions and their party. Most of them don’t even know what their party stands for. I once wrote an article that asked, “Can a Christian be a Democrat?” Of course the answer was yes. But he or she can’t be a good Democrat, because the Democrat Party stands for so many things that the Bible teaches are evil.

For instance, the Democrat Party is directly responsible for the deaths of millions of unborn humans. It stands up for the “rights” of perverts to assault our children (both physically and emotionally) with their godless, twisted lifestyles. And it supports the mass brain-washing of our children in the public schools designed to turn them into “useful drones” who will unthinkingly obey whatever the government decrees, as our Webmaster so aptly described in his doctoral dissertation. All Christians would have to do is read the Democrat Party platform, and they would never vote Democrat again. But they are ignorant of the damage being done to our citizens by their Party, because they have their heads in the sand.

The disgusting people who are uttering these vile curses against the president – and, by extension, the half of the nation’s citizens they despise – are leaders in the Party, and in the media establishment that is their PR arm.

For instance, Zara Rahim is not some random pitiful Trump troll. She was a high ranking official in the Obama-Biden Administration, and spokesperson for Hillary’s campaign. She epitomizes the way many godless Democrats think: “It’s been against my moral identity to tweet this for the past four years, but I hope he dies.”

Max Berger, a former Elizabeth Warren staffer Tweeted: “He’s a corrupt, white supremacist criminal who’s responsible for more American deaths than 9/11 and the wars in Vietnam, Korea, Iraq and WWI combined. No one should feel bad for him.”

Alexandria Ocasio-Cortez, the hateful “Bartender from the Bronx” who somehow became a member of the U.S. House of Representatives, tweeted about how upset she was when Twitter banned people from praying for the President to die.

I could fill many pages with similar quotes from current and former Democrat officials, elected and appointed. But I don’t want to waste ink on them. If you have the stomach for it, you can follow the links below to see just how demented and abhorrent the leaders of the Democrats have become. Even more telling, look at what Democrats are not saying. Joe Biden said in the recent debate, “I AM the Democrat Party.” Yet he has continually refused to utter one word against the worst of the worst in his Party – because he desperately needs their support.

Nancy Pelosi’s mealy-mouthed response when asked how she felt about the President and First Lady contracting the China virus was that it was “sad.” Then she immediately launched into an attack on the president, basically saying that he got what he deserved. It reminded me of Obama’s “pastor” who said the same thing when America was attacked by Islamic fundamentalists on 9-11.

Chuck Schumer, the Senate Minority Leader, said his "thoughts" were with the president. (What does that even mean? Thoughts don't mean anything. Prayers do. But obviously Schumer is not a praying kind of guy.) Then he immediately launched into an attack on the President. He said Trump should do something about testing and contact tracing in the Senate. Hello! Do you know anything about the Constitution, Chucky? Have you heard of the seperation of powers among the three branches of government? It's the Senate's job to pass regulations for the Senate, not the President's.

After seeing the reprehensible, almost ecstatic, glee the Democratic establishment has taken in response to the danger to our nation of our leader being stricken with a potentially deadly disease, it was heartening to see crowds of Patriots praying for the President outside his hospital day and night since he arrived there. They waved American flags, Trump flags, and police flags. They prayed, some cried, and they gave the President encouragement.

Many don’t know him, but Mark Meadows, the president’s Chief of Staff, is the second most powerful man in the nation. Technically that person is the Vice President, but for 9 decades, going all the way back to FDR, the COS has had more access to the President in most administrations, and therefore is more powerful. So many were surprised, when Trump learned that so many were outside standing vigil and praying for him, that he sent his Chief of Staff outside to personally deliver Presidential chocolates to them. Today he briefly left the hospital and drove past the crowds lining both sides of the street to wave at them and show his appreciation. That’s just the kind of man he is.

What many Democrats are doing is cursing the president. I’m not talking about the filthy language they routinely use when speaking of him (words that begin with “F”). I’m talking about curses in the Biblical sense. James says in Chapter 3, verse 10, “From the same mouth come pouring out blessings and curses. My brothers, these things ought not to be so.” That was the verse I immediately thought of when I heard Obama give his “well wishes” to the president, and then condescendingly acknowledge that even Trump and his wife are human.

Millions of people - not just those gathered in front of the Walter Reed Medical Center in Maryland, but all over the nation – are praying for our president. As they do so, they are blessing him, as the Bible commands us to do. Strangely, many who are blessing him don’t like him. But when Obama was president, our family prayed for him every day – and we didn’t like him. In my mind, it is hard to decide who was the worst president ever – Barrack Hussein Obama or Franklin Delano Roosevelt. But none of that matters when it comes to obeying the Word of God. It says…


“Pray for kings and all others who are in authority over us, or are in places of high responsibility, so that we can live in peace and quietness, spending our time in godly living and thinking much about the Lord. This is good and pleases God our Savior, for he longs for all to be saved and to understand this truth.” (I Timothy 2:2-4.)

I believe the reason the Bible says that everyone should pray for our leaders – whether we have the same political beliefs or not – is partly because that is the only way we will live a peaceful life, as God intends. Look at the way the hatred towards the President has divided the nation, with Antifa and other domestic terrorists burning buildings, inciting riots, raping, and murdering fellow citizens. They are trying to foment a civil war in our nation.

The other reason is another Biblical principle. Romans 13:1 is very clear: “Let every soul be subject unto the higher powers. For there is no power but of God: the powers that be are ordained of God.” This means that, whatever we may think about the election that put Donald Trump in the Oval Office, he would not be in that position unless God had ordained it.

So while I pray that President Trump will be re-elected, if Joe Biden becomes president, I believe it will be because God, in His wisdom, put him there. Will I be happy about it? No. But God seldom consults me about his decisions. Will I riot, beat up and terrorize elderly people, burn courthouses and churches, or assassinate police officers? Absolutely not.

The difference between Christians and the people who do those things is that we trust God. We know that He is the One who makes all things work together for good for those that love Him and follow Him. That doesn’t mean that everything that happens is good. It just means that the God who created the universe is well able to take something that Satan intended to harm us, and turn it into a blessing. That’s the God I trust and serve, and that’s why I have peace.

If you lack peace, there’s a cure for that. It’s a verse that everyone in the country has heard, or seen on a billboard or painted on a wall.


John 3:16. “For God so loved the world that He gave His only Son, so that whoever believed in Him should not perish, but have everlasting life."

Read that verse and meditate on it. In fact, read the whole Book of John. (It’s the fourth book in the New Testament.) Then find a Christian and ask them to pray with you as you allow God to take away the bitterness and fill your heart with love.